On the Astros: Matt Dominguez is the perfect example of this Astros season

Trying to make sense of the random and Matt Dominguez. Last MattyD story I'm writing for a month. I swear.

Share All sharing options for: On the Astros: Matt Dominguez is the perfect example of this Astros season

What do we do with all that randomness? We search for patterns. Everything can't be random, there has to be some meaning, some purpose to the noise. In sports, that involves trying to find examples. We're either comparing teams of the present to teams of the past (would the '13 Heat beat the '57 Celtics?) or comparing players to past greats (who's the next Michael Jordan?).

Those comparisons are fun and they start arguments, but only occasionally are they useful. In some very rare cases, they lead us to some greater nugget of truth about a team or a player. In some cases, it's both.

Is MattyD the next Juan Uribe? 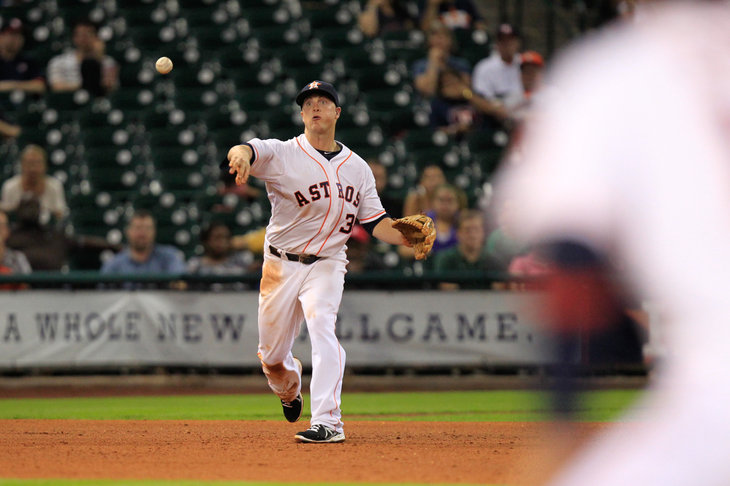 Another in a series of attempts to understand what lo-er, Matt Dominguez is.

That's exactly the case with Matt Dominguez and the Houston Astros. Dominguez is the perfect poster-boy for this year's Houston baseball team for many reasons, but those reasons are intrinsically linked to truths about the team itself. Through Dominguez, we can see this Astros team more clearly.

What's so special about Matt Dominguez?

First of all, he's young. Of the 30 starting third basemen in the major league, only one is younger than the 23-year old Dominguez (Baltimore's 21-year old Manny Machado). In fact, only two more are within two years of Dominguez (Seattle's Kyle Seager and KC's Mike Moustakas).

Being young means Dominguez has plenty of room to grow. It means his struggles this season can be written off as growing pains, the things he needs to do so he can improve as a player. He won't be hitting the prime of his career for another four or five years, so the Astros can afford to be patient with him.

In fact, the Astros are fielding one of the youngest teams in the franchise's history. Only nine other teams in the last 50 years in Houston have been younger and it's been over 20 years since the combined roster was younger than the current average of 26.6 years.

That means this entire roster is about experimenting and patience, seeing who sticks and who doesn't. That's what happened with Houston's All-Star catcher Jason Castro. With Castro two years removed from a catastrophic knee injury, the Astros didn't have to put their faith in him as the starting catcher in 2013, but they did.

He rewarded that faith by becoming the best hitter on the team. Not all the players on this roster have taken that leap. There have been plenty of struggles. But, that's what ties it together with Dominguez yet again.

Dominguez is not a perfect player. He's got plenty of flaws, like not walking ever and not typically making contact, either. Of the 122 players in the majors this season to collect more than 300 plate appearances, only seven have OPS (on-base plus slugging) lower than Dominguez' .636.

Similarly, this entire Astros team has struggled offensively. They've flirted with getting no-hit multiple times, have gone through players in the outfield like they're riding a merry-go-round and, of course, they've struck out.

Lord, have they struck out.

Guys like Rick Ankiel aren't around to hold them back, as Houston tinkers with the edges of its roster, with the older players to try and find some consistency. Through it all, guys like Dominguez and Jose Altuve have been there.
Though he has a sterling defensive reputation, Dominguez has also been fairly inconsistent at third base. He's given up some bad errors and had his first baseman hurt him on a few more. The advanced defensive numbers on him don't look great, but that's also a product of the defensive metrics sort of misunderstanding him.

See, the primary defensive stat that gets used for FanGraphs' Wins Above Replacement calculation is Ultimate Zone Rating (UZR). That statistic breaks down the field into zones and then charts every play to determine which fielder should have gotten to a ball and which fielder did.

Unfortunately, UZR throws out any plays with extreme infield shifts. Houston has used extreme shifts a lot, so Dominguez has been hurt by having those plays not count on his permanent record. In a way, he's being misunderstood by the metrics.

This Astros team is the same way. It's misunderstood as one of the worst in baseball. I mean, they are. But they're not historically bad. They're just young, imperfect and learning on the fly. Instead of having some veteran presences to break their fall, these Astros are playing without a net.

Most nights, they're falling on their faces. Some nights, like their thrilling nationally-televised victory over the Rangers last Saturday, they're soaring pretty high.

But, even at the end of this season, Matt Dominguez and this Houston roster will be incomplete. Dominguez needs to work on his plate discipline if he wants to continue to be part of this team, but for now, he's the epitome of what the 2013 have been.