With Day One in the books, the focus has turned to Day Two and how to approach it and who is available.

The Astros have already drafted two college right-handed pitchers and they have they have eight more picks today (rounds 3-10 beginning at 11:30 AM CST). Kyuss94 has already covered for us who the top prospects are left on the board. But, how will the Astros approach day two and what kind of players will they target?

I think you will see something similar to last year. I think you'll see a higher upside high school prospect who was considered a slight signability concern similar to Brett Phillips last year drafted in the first few rounds. Remember there was a rumor that there was a "pre-draft deal" and he told told teams not to draft him. Could it be there's a similar situation this year? It's hard to know who that will be though. It could be Jonathan Denney or Cord Sandberg in third round or maybe a lower profile in the fourth or later.

The Top Talent Availabe at 3.1 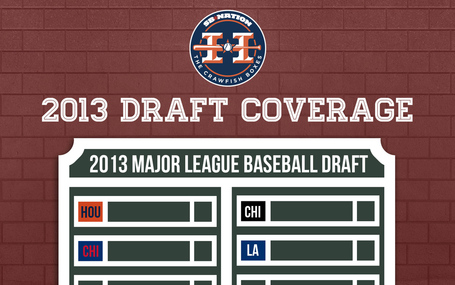 Who are the top prospects that are still available?

I also expect that there are a few college seniors and small school guys that will be drafted in order to ensure they open up a little cap room so they can have the money for the high school signability risk. Somebody like Georgia Tech's RHP Buck Farmer, whom we profiled, is a senior and his teammate, outfielder Brandon Thomas, is as well. They are both good prospects and fit the bill. There is also guys like Mason Katz from LSU who fits Jeff Luhnow's profile of a guy with good BB/K ratio and provides good power for a first baseman.

You then have this Grantland article that talks about the evolution of pitch framing that the Astros are working on. The Astros are wanting to develop their own catchers and work on pitch framing early so that they are very good at it when they get to the majors. We've already talked about Denney, but New Mexico has a senior catcher, Mitchell Garver. I expect that they will draft a catcher at some point during day two.

Jeff Luhnow has also made it a point to bring in more left-handed pitching into the system and I also expect him to address that at some point. Whether it be with the high ceiling and very risky Jacob Brentz or the safer Kent Emmanuel or someone else, I expect one today.

Don't confuse this with the idea of only taking best player available. With the MLB Draft, you take the BPA early on and then you later on transition into selecting for need to fill out rosters. Day two is the transition period. We are beginning to get to the time where there are several prospects rated equally and if you have one of those areas that you want to address in that group, you feel comfortable to doing so. But, if you have a clear BPA or the group of BPA doesn't address that, you pick the one you want the most. Day Three is when you really start trying to putting short-season rosters into the equation.