Don't pass on power at the top. Chicks dig the long ball, man.

Share All sharing options for: 2013 MLB Draft: Why the Astros should take Kris Bryant at 1-1

What's the hardest commodity to find in major league baseball?

Our dear draft writers would have you believe it's a true ace for the pitching staff and that none such animal can be had outside the top pick in the draft. They're wrong, though. The hardest commodity to find is simple.

That's the biggest reason why the Astros should take Kris Bryant at the top of this draft, but it's not the only one. Why do hitters invariably win Most Valuable Player each and every year? Because, 29 times out of 30, a hitter who plays every day is more valuable than a pitcher who starts 35 times a year. 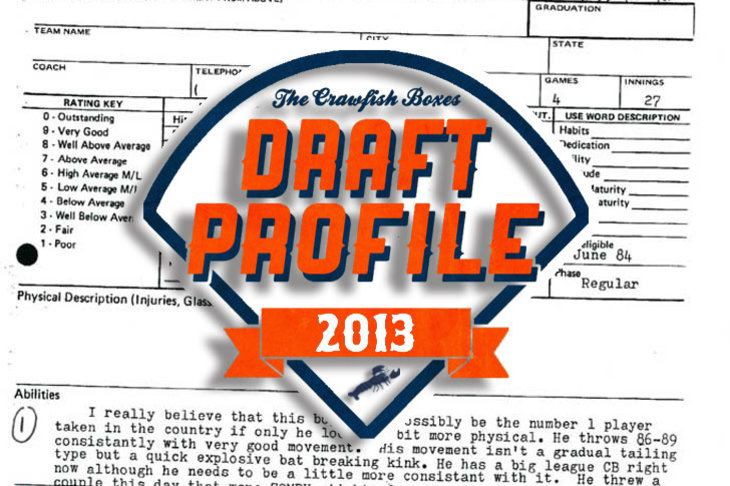 Chris makes a better case than me for taking the powerful third baseman.

Let's put Bryant's season into context. For the University of San Diego, the junior third baseman bashed 31 home runs in 62 games and 228 at-bats. That's a rate of a home run every 7.3 at-bats. To put that into perspective, Barry Bonds hit a home run every 6.5 at-bats in 2001 when he set the major league record with 73 in a season. Roger Maris hit one every 9.6 at-bats in his record-breaking season and Babe Ruth hit one every nine at-bats when he hit 60.

That's not even mentioning the BBCOR bats that college and high school baseball have adopted, severely limiting power potential. The NCAA record for home runs in a season is 48, by Pete Incaviglia. Bryant is the first player since Victor Roach to top 30 homers with the power-dampening bats and only the second in three seasons with the BBCOR bats to hit more than 25 in a season.

And yet, Bryant isn't just a pure power hitter. Sure, he's got some contact issues in the past, but he struck out just 14 percent of the time this year in college. That's the same strikeout rate Jeff Bagwell had in his MVP season in 1994.

When Bryant is hitting 40 home runs a year with a .270 batting average and a .360 on-base percentage, making five or six All-Star games in right field, won't you be jealous?

Of course, that's an unfair comparision, since Bryant is going against guys who might not even pitch in the minor leauges, much less in the majors. Scouting consensus is that Bryant has a long swing and will probably strike out 20-25 percent of the time in the majors.

If Bryant can use his excellent plate discipline to walk 10 percent of the time, he will be good-to-great major leaguer pretty quickly. Yes, he might strike out, but he won't be Chris Carter. He'll be much like many of the power hitters of the past with high strikeout rates, high walk rates and the ability to change a game with one swing of the bat.

Ah, you say, but what about his ultimate position. I've heard he can't stick at third base. Well, that may be true. He's athletic at the corner, but may not have the feet or range to stay there full-time. I'm sure whatever team drafts him will give him every chance to stick there in the future, much as Milwaukee did with Ryan Braun.

Still, Bryant has a great arm and will likely move to right field if he can't play third. With his kind of power and a good arm to boot, that makes him an excellent candidate to be one of the better right fielders in the game for a long time.

Do you pass on a guy like that? What if Mark Appel is the pick, but he ends up being no better than Kris Benson, a college arm who ended up as the top pick in the draft. He'd have a good career with solid WAR totals and pitch for many years, but would fall short of that "ace" label. When Bryant is hitting 40 home runs a year with a .270 batting average and a .360 on-base percentage, making five or six All-Star games in right field, won't you be jealous?

That's why you can't pass on Kris Bryant. He's got immense power. Finding that kind of power, that kind of middle-of-the-order bat is very hard. When you get one in a trade, it's someone like Chris Carter, powerful but flawed. When you find it in free agency, you sign him for $150 million dollars over five years.

The Astros can get that kind of hitter at the top of the draft for $5-6 million. That's a pretty big steal, if you ask me.