On the Astros: Don't look now, But Erik Bedard is back

One of Houston's many veteran signees this winter looked like a bust in April, but has slowly become a rotational anchor.

Share All sharing options for: On the Astros: Don't look now, But Erik Bedard is back

Of all the experiments Astros GM Jeff Luhnow rolled out this winter, one of the longest shots may have been Erik Bedard. He also seemed like the first one to out and out fail.

Well, after Rick Ankiel. But, Bedard was close on Ankiel's failing heels.

After posting a horrendous April, Bedard was demoted from the rotation. In one of his last starts before heading to the bullpen, he only got one out before exiting the game. It was the first time since Brandon Duckworth in 2004 that an Astros pitcher only recorded one out in a start (though Philip Humber would equal the feat five days later).

At that point, it seemed that Bedard and Humber both were washout cases. They'd have to leave Top Gun for good.

Since May 11, though, Erik Bedard is back. In nine starts since returning to the rotation, Bedard has gone 3-1 with a 3.23 ERA in 53 innings. He's struck out 42 batters in that stretch and walked 19. He's also posted a batting average on balls in play of .292, which is slightly lower than average, but not enough so to predict regression in Bedard's recent numbers.

Bedard is over halfway to his innings total from last season, but is putting up numbers better than he did with the Pirates for the most part. His strikeout rate isn't as good and his walk rate is still pretty high. But, since 2008, he has posted walk rates around four per nine innings, so that's not unusual.

His FIP is higher than his season ERA right now, which may seem like he's due to get worse moving forward. His true ERA is also slightly higher than his ERA (4.76) while his SIERA is right in line with that 4.40 season ERA.

Why do I keep using ERA? Isn't it a terrible stat, almost as worthless as wins? 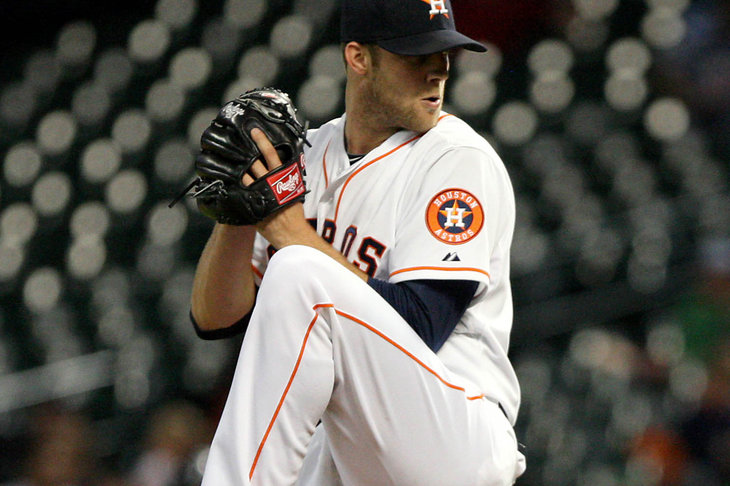 Checking in on the BABiP for each of Houston's pitchers

Maybe we don't need to talk about this, but ERA isn't entirely useless. It does a good job of showing how good a player has been to that point. Even if it probably should count runs instead of just earned runs, it still gives pretty simple snapshot of how effective a pitcher has been in games.

What ERA doesn't do is prove predictive of how well a pitcher will do in the future. That's why we turn to things like FIP and SIERA when talking about starting pitching, because we want to know whether this success is sustainable.

With Bedard, that's harder to tell. The numbers suggest he's going to get worse. His strikeout falling isn't a good sign, but his line drive rate has also fallen a bit. His home run rate has risen, but his fly ball rate has also risen and probably won't stay this high all season.

Considering it costs about $5.5 million to buy one win above replacement on the open market, Luhnow has nearly doubled his investment in Bedard already and figures to quadruple it by the end of the season.

That means there's still some volatility in his future, which explains the wide variety of opinions on his predictive stats. Bedard is still dealing lately, throwing up good start after good start. He's pitching deep into games and keeping the Astros in games.

It doesn't show up in the stats and it's not predictive of anything, but the Astros are 5-4 in those last nine Bedard starts. If you're pointing to one of the reasons Houston has been able to play .500 ball for the last six weeks, point to the rotation, but also point out Bedard.

Luhnow is paying Bedard $1.15 million this season. He's already been worth 0.4 fWAR, and the projections show him finishing the season being worth 0.7 WAR. Considering it costs about $5.5 million to buy one win above replacement on the open market, Luhnow has nearly doubled his investment in Bedard already and figures to quadruple it by the end of the season.

That's a pretty good, low-cost move. Even if Bedard isn't flipped for prospects in the next month, he's provided value to Houston's rotation, keeping guys like Jarred Cosart in the minors until they're ready. If he keeps pitching like he has since May 11, Bedard could end up as Luhnow's best move of the offseason.