The five teams with the most need for Astros starting pitcher Bud Norris' services.

Bud Norris is the most talked about name right now in terms of trade rumors and controversy. Comments from the maligned pitcher aside, teams of all records are kicking the tires on one of the few available starters on the trade market currently. The extra wild card has kept more teams in the playoff hunt so a team like the Padres, or any other team in the National League West for that matter, still have a chance at the playoffs. Norris' appeal lies in the fact that he's cost controlled for the next few years and doesn't become a free agent until 2016.

There are some within baseball that question how well Norris would respond to being in a playoff race for a team. I can't say how well Norris will adjust to playing on a winning team, but I can tell you that Bud is having the best year of his career to date. His 1.6 wins above replacement (WAR) match his 2011 WAR total in 91 less innings.* His ERA and FIP are both in-line with each other and are both below his career numbers; his SIERA and xFIP are all above his career numbers.

*All stats are prior to Wednesday night's games

The highs and lows on either side of his career numbers are due to him being a very different pitcher this year. He's striking out fewer batters but with that he's also walking fewer batters. He's also managed to keep the ball on the ground more and has given up significantly fewer home runs. The home runs help explain why his xFIP is higher than his career numbers but I wouldn't necessarily expect him to start giving up more home runs this year. In fact what we're seeing with Bud and home runs is probably some positive regression in his career peripherals. An average home run to fly ball ratio (HR/FB) is 11%. With the 6.3% HR/FB Bud has given up this season (gave up 12% last year) , his career HR/FB has regressed to 10.9% so this could very well be some regression to the mean for Norris. 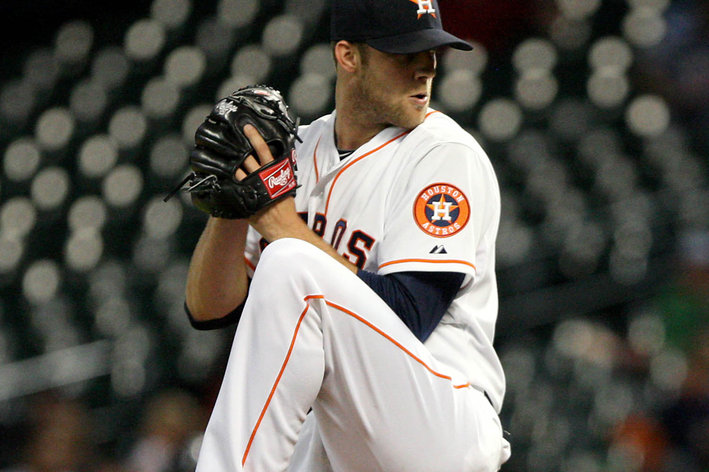 Talking Astros Sabermetrics: BABIP and x-BABIP Tells Us A Lot About the Astros Rotations' Improvement

Another statistic that may positively regress for Bud this season is his batting average on balls in play (BABIP), which currently sits at .322. His career BABIP is .307 so Norris may actually start giving up fewer hits. As far as projection systems ZiPS and Steamer go, they both expect Norris to finish with a WAR total over two, which again would be a career high. And who knows what a trade could do for Bud as far as performance. Both Roy Oswalt and Hunter Pence seemed to get a boost after their trades, the same thing could happen to Norris.

I initially started by looking at a team's overall FIP and SIERA numbers but as I began to look at individual teams, I found WAR more useful to try and determine which teams were the best fit for Bud Norris. As I looked at each individual team I was more concerned with a team's depth rather than where Norris would fit in the rotation based on his current WAR numbers. He's only one of five guys in a rotation, so a team with three guys above one WAR and the rest under is better off than a team with one guy above two WAR and the rest under one WAR. It doesn't preclude him from getting traded to that team, it just means he has less of an impact on that team's starting rotation.

With that in mind I have two teams outside the top five that I think he has a good chance of being traded to, the Kansas City Royals and Arizona Diamondbacks. Both teams have three starters at one WAR or above, however, at his current WAR total he would be the number two or three starter on those teams.

The Indians have quite a few names you should be familiar with: Justin Masterson, Ubaldo Jiminez, Scott Kazmir, Trevor Bauer and good ol' Brett Myers. Justin Masterson and Corey Kluber have both performed well to this point of the season and should continue to do so. Zach McAllister has also pitched well but his FIP and xFIP indicate that he may be in for some negative regression. Trevor Bauer is a former top prospect and only has 16 and a third innings this year so his numbers at this point aren't indicative of really anything.

If the Indians were to trade for Norris he would become the second or third best starter on this team.

This team is attracting the most speculation with several struggling Giants' starters, Ryan Vogelsong being hurt, and San Francisco being home for Norris. Madison Bumgarner is the guy for the Giants right now with Barry Zito and Tim Lincecum pitching decently but below Norris' level so far. Matt Cain has really struggled but signs suggest he should turn things around.

The starting rotation for the Giants has pitched worse than the names in the rotation would indicate. Norris would easily be the second or third best starter on this team. Third if Matt Cain turns it around, second if he doesn't. I flip-flopped the Giants and Indians a couple times before I finally set this order. I think the Giants would be more inclined to trade for Norris than the Indians.

Toronto is another team with some pretty big names that have underperformed to this point of the season. The Blue Jays don't have a starter with a WAR above one. Mark Buehrle leads the staff followed by Josh Johnson, the injured J.A. Happ, R.A. Dickey and Chien-Ming Wang. Things seem to be turning around for the Blue Jays though as they recently went on an 11 game winning streak.

I have a hard time putting Norris ahead of Buehrle, Johnson and/or Dickey, however, he is cost controlled and to this point in the season has outperformed all of them.

Eric Stults leads the Padres starting rotation with a 1.7 WAR and he's followed by Andrew Cashner with a .7 WAR. Former Reds pitcher Edinson Volquez is also in the rotation. After that? Ya, not much. Hey! Jason Marquis is still pitching!

There's a reason why Kevin Gausman was called up so quickly after being drafted fourth overall last year. Wei-Yan Chen leads the Orioles staff with a 1.1 WAR followed by Miguel Gonzalez with a .9 WAR. Chris Tillman, Jason Hammel, Jair Jurrjens, Zach Britton and Freddy Garcia are all pitchers you may have heard before that have pitched for the Orioles this year. None have really pitched better than replacement level. To further feed off the Orioles rotation woes, Dylan Bundy, the Orioles top pitching prospect, is looking like he will need Tommy John surgery.

While Bundy is recovering from surgery and Gausman is adjusting to the major leagues, Norris could fill a huge rotation need for the Orioles now and for the next few years.