The Rule 5 draftee and the recently acquired left-hander both will be heading to other teams.

Another off-day means that the Turk comes to the Astros roster move. Seems that Jeff Luhnow must wait for these off days to make serious roster moves, as he did again on Monday. The Astros announced in a press release that they had designated left-handed reliever Wade LeBlanc for assignment while optioning Marwin Gonzalez to Triple-A Oklahoma City.

Gonzalez, 24, 54 games with the Astros this season, making 50 starts. He split the starter's job at shortstop with Ronny Cedeno, making 46 starts at the position, compared to Cedeno's 31. This will be Gonzalez's first option to Triple A since being selected in the 2011 Rule 5 Draft. Gonzalez was originally selected that offseason by Boston and was traded to Houston on draft day. 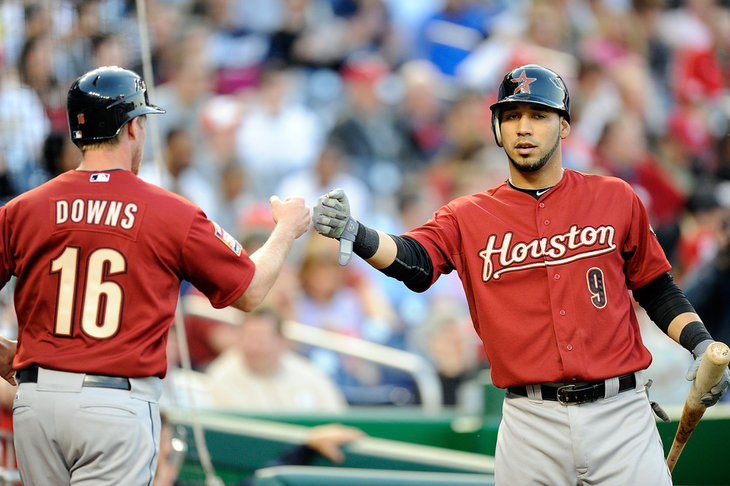 After a hot start, we looked at reasons why MarGo's play might not have been sustainable.

LeBlanc, 28, made three appearances for the Astros since being claimed off waivers from Miami on June 8. He's appeared in 16 Major League games this season, including seven starts, while splitting time with Miami and Houston.

What's more interesting is that the team did not immediately announce any corresponding roster moves. LeBlanc getting DFAed means Houston has an open spot on its 40-man roster. That could mean someone like Asher Wojciechowski could be added to the roster, since both Jarred Cosart and Jonathan Villar have 40-man roster spots already.

Another option is that Houston is planning on claiming a player off waivers. The Royals recently designated outfielder Quintin Berry for assignment after claiming Maikel Cleto. Other recently designated players who could be soon picked by the Astros are outfielder Eric Thames, shortstop Josh Wilson, reliever Jose Valverde and right-hander Logan Kensing.

Other possible candidates for promotion are Josh Zeid, Eric Berger and Kevin Chapman. None of those pitchers are currently on the 40-man roster. Another possibility is that Brett Wallace will be recalled, after the Astros Analysis account tweeted this out recently.

Who do you got? Who might be the Astros answer to this roster mystery? Will it be another shortstop like Wilson? Is there a trade brewing? Or will some of the prospects be making a debut?

Jake Elmore is expected to be join #Houston #Astros. #MLB