Jerome Solomon, Bud Norris and the decline and fall of Western newspaper columnists

On Thursday, Solomon wrote a scathing critique of comments Bud Norris made earlier in the week. The problem? Solomon completely missed the boat.

Share All sharing options for: Jerome Solomon, Bud Norris and the decline and fall of Western newspaper columnists

If Mark Appel had not grown up in Houston, would the Astros have made him the No. 1 pick?

If he had grown up in Vancouver or Chicago or Detroit, would the Astros have picked Kris Bryant or Kohl Stewart over him?

Yet, if we are to believe Jerome Solomon of the Houston Chronicle, Appel is the paragon of virtue, the right man for the job to lead Houston back to the promised land because he acknowledged it will be cool to pitch for the team he grew up rooting for.

It's a great story, it really is, because there are hundreds if not thousands of kids still living in Houston and still following the Astros who want the same thing.

But, it doesn't make Bud Norris "(not) the polar opposite of Appel, just different. It makes them the same with small differences in geography.

That's the biggest thing Solomon misses in his hatchet job of Norris' credibility and reputation. Norris' quotes, which Solomon didn't even bother to use in their entirety, showed a player who would be excited to play for his hometown team. They did not show a player asking to be traded there now. For the sake of posterity, here are the quotes in full.

"I've seen stable, veteran players get moved to new organizations. Sometimes you don't understand why it's not you. So, it's been tough. ... Now that my name's the one popping up, it's a little different feeling. At the end of the day, I need to prepare myself to pitch every five days for the team I'm on. I've been in Houston my entire career. All I know is pitching for this team. If it changes, it changes. But it's not going to change my aspect of going out there and pitching."

"You have to be informed," he said. "I don't think you want to be blindsided by it: One day, you come to the park and, boom, you're gone. I don't pay too much attention to it, but I'm definitely in the loop. I get tidbits here and there ... But it comes down to the front office. I have to impress somebody enough where they want to come get me."

Is that a player asking out of a town? Is that a player openly pining for a trade? Nope. That sounds like a guy working with tenuous job security. That's something ink-stained wretches should be able to sympathize with, as neither man can know with certainty that he'll have a job with the team/paper he's now working for at the end of the year.

If anything, Norris' efforts to tune out distractions and focus only on what he can control shows signs of immense maturity. Solomon credited Appel with tons of maturity based on one news conference, and claimed Bud was immature based on comments from teammates five years ago.

Hey, Jerome? Do you think a 23-year old kid might be immature at times, but could grow up in the five years since?

I saw and heard malcontents in the locker room last season with the Astros. Norris was not among them. He's always been professional and positive about the team in any context. Sure, he joked about the air conditioning, but haven't we all made jokes at the Astros expense? How many has Solomon made himself on Twitter about the team in the last week? Probably more than Norris.

Joe Posnanski talked about Andy Pettitte a few weeks ago and how he had the Van Doren gene. Named after Charles Van Doren, the quiz show contestant who everyone wanted to think the best about. I wonder if that applies in this situation. Does Solomon subconsciously want to root for Appel, but Norris falls short of that line, all because he didn't grow up in Houston?

I'm pretty sure Jeff Bagwell and Craig Biggio both talked about playing in Yankee Stadium and Fenway Park for the first time, and I'm pretty sure they both said things like, "It's a childhood dream come true." The only reason their comments weren't taken as seriously as the remarks made by Norris is because of job security.

Astros' Norris a good bet to be moved 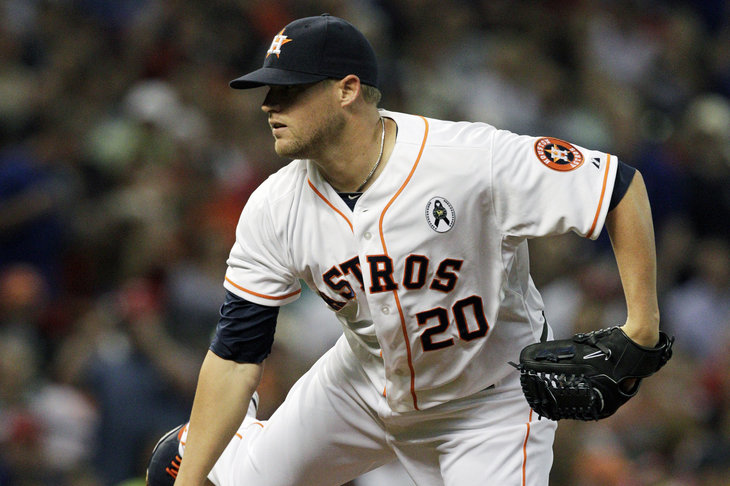 If the Astros committed to Norris like they did to Larry Dierker, I'm sure Norris would be every bit the Astro for life. If they shop him around all summer in trades, he's going to prepare to leave town. It's a simple truth that Solomon completely missed.

The column was patently unfair and was the worst kind of character assassination of Norris for no reason at all.

Wait. There is a reason.

It's because the Chronicle got scooped on the quotes in the first place. See, Norris talked to Jon Morosi of Fox Sports in the first place, with a piece that came out much earlier in the week. Only after it picked up traction, getting 800 comments on a post over at McCovey Chronicles in a story we linked to on our front page, did the Chronicle decide to cover it.

And, what they did was try to glom together the Appel signing with Norris' comments into something that might drive page views or incite "chron comments" by the thousand. "Heck yes," said chron commenter might say, "we don't want his sorry butt in our town if he's not from here. Go back to San Francisco, you sissy." I assume that's how chron commenters talk, because for the sake of my sanity, I refuse to delve into them.

Solomon is pandering to the masses in Houston, just like he does on his radio show. You know, the one he constantly promotes in print? Like when he got an "exclusive" interview with Jim Crane to talk about CSN Houston and then he wrote a whole column about it the next day, saying how awesome Crane is?

Or, even worse, how he was a knowing part of this farce of an interview with a local college softball team's head coach, where they came up with pretty much every sexist question they could think of to ask her and still not talk about her softball team.

What's more, Solomon was unapologetic about it on Twitter, as is his norm. It was all a joke, right? We can make fun of women, because they're not really people, or not people who listen to our guys sports talk station, right, brosef?

What's worse is that the newspaper sports columnist used to be the biggest guns on the block. A Chronicle sports column from Richard Justice or Dale Robertson was must-read stuff. And yet, those columns are a dying part of the industry, as this excellent Grantland piece described. In their place are the more long-form pieces, like what Brian T. Smith has been doing on the Astros beat.

Compare Smith's stories from his time in San Antonio with Corpus Christi to Solomon's column and tell me whose star should be shining brightest right now.

If the column is becoming more like sports talk radio, then its star will fall even further, as sports talk radio thinks it's okay to do things like this. I can only hope that the solution to the digital age invading newspapers isn't to become like Bleacher Report, with slideshows and articles aimed at getting the most page views at the cost of quality and integrity.

I grew up reading the Houston Chronicle. When I was a kid, I'd pore over those pages every chance I'd get, as soon as my dad was finished with it. On the four occasions when I've had stories published in the Chronicle, I got goosebumps, just like Norris talked about to Morosi. Even framed one of them, because I was young and less jaded.

But, after reading this latest column and seeing this latest trend, I can't fully share Bud's sentiments. If this is the direction the Chronicle wants to go, that's not a team I want to be a part of.