Two Astros draftees knock a third out of the College World Series, Tony Kemp hits a home run, and Chia-Jen Lo makes an appearance. The world is anarchy.

Back in May, I took a brief look at Astros minor leaguers' performances relative to their leagues. One of the things I discovered back then was that Joe Sclafani seemed to be out-Nolan Fontanaing Nolan Fontana.

Now, as short season leagues kick into gear, full-season teams lock up postseason bids, and All-Star Games begin, I want to take a moment to reflect on the season our boys have been having by re-visiting this idea.

This time, I did things a little differently. I compared players to everyone within their level - that is, I compared PCL hitters to PCL and IL hitters. I compared Cal League hitters to Cal, Carolina, and FSL hitters. And so on. The cap was 100 plate appearances - all league averages listed are the averages of players who have had at least 100 plate appearances (or 50 innings pitched) in that league. So, as before, a player might qualify in more than one league.

Before we begin, I'd be remiss if I didn't point out these two prospects:

Player B is none other than George Springer, Prospect To The Stars. But the strapping young man above him, who boasts similar-but-actually-better numbers relative to league average, except for a K% that is twice as good as Springer? Do you know who that man is? Look below and see if you can piece it out.

In case you haven't guessed it yet, Player A above is none other than Marc Krauss, who is showing a slightly better ISO and walk rate compared to his level, and a significantly better strikeout rate, than Springer. Now, as with most things that hint of fun, this comes with a caveat: Krauss is already twenty-five years old, and will be twenty-six in October. Still, a lot of you have been clamoring for Krauss to get a call up, and let this be a piece of evidence in favor of such a move.

I'll Be Seein' You In All The Old Familiar Places

Well, well, well. Minor League Baseball announced their minor leaguers of the week for the week ending June 16th, and for the first time since 2000, Roy Oswalt was named the Texas League Pitcher of the Week. Congrats, Roy.

North Carolina knocked off LSU 4-2 to set up yet another game against NC State, which will take place Thursday, June 19. NC State fell into the loser bracket after losing to UCLA today, 2-1. The winner of Thursday's game will go on to face UCLA on Friday, June 21. Meanwhile, Oregon State will also be in action on Thursday, taking on Indiana after knocking Louisville out of the tournament on Monday. The winner of the Oregon State/Indiana game will go on to take on Mississippi State on Friday.

That leaves a few draftees still alive in the tournament, including Jake Rodriguez of Oregon State, as well as Kent Emanuel and Brian Holberton from North Carolina. In yesterday's action against LSU, Holberton scored Colin Moran on a two-run home run in the first inning to get the scoring started, and also hit a single later in the game.

Chris Cotton finished the game for LSU, going 2.2 innings and allowing one hit, no runs, no walks, and striking out two.

To see Holberton's home run, jump ahead in this video to 00:17 (embedding isn't available, unfortunately). Also of note: He was behind the plate for the game.

A lot has been made of the home run that Tony Kemp hit in yesterday's Tri-City game. Some folks will be quick to point out that as a three-year starter at Vanderbilt, he hit only one home run. In April, 2012. Against the University of Tennesee - Martin (that game, by the way? Kemp led off the first inning by getting hit by a pitch. Then, later in the eight-run inning, he hit a two-run shot off of UT-Martin's second pitcher of the night, Danny Kelley.)

That's true. But it doesn't tell the whole story.

Last year in the Cape Cod League, though, Kemp hit three, which was just one shy of his fellow Astros draftee, Adam Nelubowich (who strangely batted leadoff, with Kemp hitting down the order). And he hit two more in the playoffs. In fact, Kemp slugged .846 through Cotuit's three-game playoff run, and .583 in the regular season. He had fifteen extra-base hits in the regular season, including those three home runs.

The last home run Kemp hit was off of Jon Keller. Keller was an 11th-round pick by the Mariners out of high school, played for Darin Erstad at Nebraska, earning weekend starts as a true freshman, and then transferred to Tampa, where he was the starter (and winning pitcher) in the final game of the Division II College World Series. He was drafted in the 22nd round of this year's draft by Baltimore.

So Tony Kemp can hit home runs off of good pitchers, is what I'm getting at.

Maybe Tony Kemp didn't use a power approach at Vanderbilt. Maybe Tony Kemp can't hit home runs until the summer. Maybe it's all a big old small-sample-size coincidence. But it's not unheard of for Kemp to trot around the bases.

Staying in the vein of The Tony Kemp Home Run™, I quote Ed Weaver's gamer for the Troy Record:

"I needed to pinch myself to make sure I wasn't in a dream," Kemp said. "It was fun from that aspect and when I (got to) home, I was like, 'man, I really did hit a home run. I don't know many more of those I'm going to hit."The scouting report says Kemp hits "with occasional power.""Yeah, that's occasional power — with the wind, though," he said.

In the official MiLB.com gamer for Corpus Christi's game, we find a hidden gem (emphasis mine):

Corpus Christi then put a singleton on the board with Jonathan Meyer's two out double scoring Erik Castro, who'd drawn a base on balls from Ryan Kelly.

I am now in favor of all runs being called Singletons.

Heading into yesterday's road series against New Orleans, Jonathan Villar had hit safely in 11 of 14 games in the month of June, and led the team with a .346 batting average. On Sunday, he became the first Oklahoma City RedHawk to homer from both sides of the plate since Jason Botts in 2006. And did I mention that this month, he's cut his April/May strikeout rate (26%) in half (13%)?

Oklahoma City RedHawks (AAA) - Oklahoma City and the New Orleans Zephyrs (MIA) held each other scoreless for six innings. That's when some crazy nonsense happened. I'll hand it off to Katherine Terrell of the Times Picayune here: 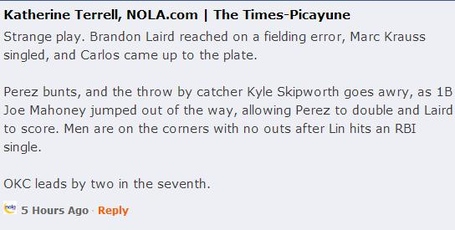 Yeah, it turned into that kind of night for the Zephyrs. Brad Peacock threw six and a third strong innings, backed up by Eric Berger and Josh Zeid. When the dust settled, the RedHawks won 3-1 despite putting across no earned runs, drawing no walks, and getting no extra base hits.

Corpus Christi Hooks (AA) - It's a good thing the Corpus Christi Hooks already clinched the first half of the Texas League South, because since accomplishing that feat, they've dropped four in a row. Ruben Alaniz has not had a good June. In three starts this month, he's made it through four innings just once - excluding his 4 innings of relief work on June 14th, his month looks a little something like this: 0-2, 9.0 IP, 13 H, 12 ER, 7 BB, 4 K. He struggled in this one against the San Antonio Missions (SDP), giving up four runs (2 earned), walking three, and striking out just 2 in four innings of work. He pitched to two batters in the fifth, but couldn't record a single out. Corpus Christi fell to San Antonio, 8-4.
Corpus Christi: 42-29, 1st - Texas League South
Lancaster Jethawks (A+) - Most of the Jethawks had the day off, but a few did get some game action, as the Cal League All-Stars got absolutely destroyed by the Carolina League All-Stars, 12-2.
Lancaster Jethawks - 39-31, 1st (clinched first half) - California League South
Quad Cities River Bandits (A) - With Byron Buxton and Carlos Correa starting and batting together at the top of the order in what could be the first of many All-Star Games to come, the top prospect in the game went hitless, but the first overall selection in the 2012 draft was there to help pick up some of the slack, going 2-for-3 in the losing effort, as the Midwest East All-Stars held on late to win 6-5.
Quad Cities: 38-31, 4th (4.5 GB, eliminated from first half) - Midwest League Western
Tri-City ValleyCats (A-) - The ValleyCats are pretty much the best team in baseball. No one's been able to beat them yet. Okay, okay, it's two games. But this team is going to put up a lot of runs. Tanner Bushue was throwing his fastball in the high eighties, per Brooks, touching 90 a few times. Also, Jon Kemmer continued his hot start, reaching base 3 of the 4 times he came to the plate.

Adrian Houser had a rough outing, giving up four straight hits to lead off the eight inning (two on the infield), which turned into four runs (three earned) ito make the game look a lot closer than it was, but Tri-City pulled out the win, 9-6, over the Vermont Lake Monsters (OAK). And the save? Ladies and gentlemen... the save was by Chia-Jen Lo! Isn't that exciting? Brooks tells me he was electric, touching 95 with his fastball, using his changeup effectively, and making hitters look silly. 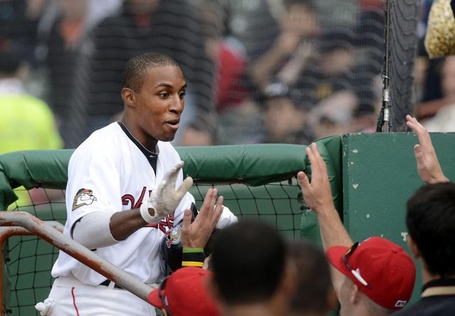 (Photo credit goes to J.S. Carras of the Troy Record)

(In my recaps, I'll be writing out lines for every ValleyCat and GCL guy for a few weeks at least, so you and I can get used to seeing the names.)
DSL Astros (Rk) - A seven-run second inning was all the room for error Geronimo Franzua needed - and more - as he struck out eight Mariners (SEA) through five innings of work. Luis Payano's bat started to come around, as he went 3-for-4 with a triple and 3 RBI, and Arturo Michelena and Jesus Bermejo continued to swing hot sticks. The Astros win this one handily, 10-3.
DSL Astros: 8-6, 3rd (3.5 GB) - Dominican Summer League Boca Chica Northwest