That's right. Jeff Luhnow has a code with the draft board. And we're gonna crack it!

As I was watching the Astros game last night and enjoyed the strike outs pile up for Jordan Lyles, a tweet caught my eye.

Ahh, but it wasn't the tweet that caught my eye...it was the profile picture. 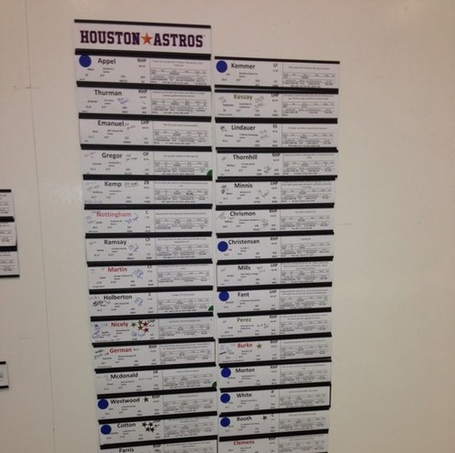 Is that the Astros complete and final 2013 MLB Draft Board? I would say it is!

But, here at TCB, we don't leave things at face value. I immediately studied it for a few minutes before emailing a link to the rest of the staff and we started to interpret what we now refer to as "The Luhnow Code."

First, the fanboy in me got excited as we tried to piece together what I hoped was an indication that the large blue dots indicated a signing. Many of these are either officially signed or are considered to be all but guaranteed, except for Mark Appel. The conspiracy theory in me began to twiddle my fingers in that Appel has come to terms already but Luhnow is being kind. He's giving Appel some alone time to graduate and spend time with his family before the media circus encompasses his every move as the number one overall pick who has signed and is pitching in the minors.

But, of course good ole David had to bring me back down to earth when he figured out that they are all college seniors.

Other codes that we have figured out is that red is for high schoolers, black for college, and green is for JuCo. We haven't quite figured out what the green quarter-circle is or what those stars are for. I mean Austin Nicely has five and Chris Cotton has four. That has to be significant...right?

What about Conrad Gregor being listed as an outfielder? It was hypothesized as a possibility but wasn't something that we expected. He's listed at 1B on the Astros draft results. It would definitely be nice if he could play out there.

Brian Holberton is listed as a catcher, which was a question mark. Nobody was really sure if he would be a catcher or outfielder.

Maybe that's what the green quarter-circle is for. Positional switch or potential switch? But, why does Chase McDonald have one?