Astros' fans and media outlets have made much hoopla over the Astros' pace-setting strikeout rate this season which currently sits at an astounding 25.5%. It would take three billion, seven hundred and eighty-four million, one hundred seventy-six thousand french fries to reach from the moon to my desk, and if 25.5% of them burned up on re-entry, nine hundred sixty-four million, nine hundred sixty-four thousand, eight hundred and eighty of them would never arrive at their destination.

That's how high the Astros' strikeout rate has been...bad enough to relegate 964,964,880 french fries to a fiery demise.

Because of the Astros' reluctance to play watchable baseball, and because the MLB draft is over and the trade deadline is a month and a half away, subjects of discussion are limited to dreams of future glory. The magical time of big league rebirth will arrive on the backs of prospects who currently rake their way through over-matched opponents in the New York Penn, California, and Texas leagues.

The vanguard of this talent influx should arrive in Houston around mid-2014, and will be personified in part by Astros' 2011 first-round draft pick George Springer. In 2013, the right-handed center fielder has so far hit more home runs than every single one of the four thousandish other players in the minor leagues. He carries a .303/.405/.618 line into mid-June, has stolen 18 bases, and played good defense at a tough position. He walks at an impressive 13% clip (8% is league average).

Unfortunately, the anticipation of Springer's debut has been tempered by one fact that fans continually bring up as a concern: he strikes out at an alarming rate. This fear is particularly prevalent because of the major league club's ongoing whiff woes. Springer has struck out more times than any other player in the Texas League except for 27 year old journeyman Matt Fields. Springer's 28.4% strikeout per plate appearance rate is fifth-highest.

While Springer's strikeout rate should concern fans and the front office a little, this spot on his résumé does not foretell anything except that he will not be a guy with low strikeout totals in the majors. More goes into being an effective hitter than avoiding the walk of shame back to the dugout. In fact, Chris St. John of Beyond the Boxscore spends many words to investigate the correlation between strikeout rates and walk rates among prospects, and to determine what those stats say about a player's likelihood of succeeding in the majors.

When the strikeouts are coupled with a high walk rate, the player's odds of becoming a productive major leaguer increase drastically.

St. John finds that despite the stigma attached to high strikeout players, when the strikeouts are coupled with a high walk rate, the player's odds of becoming a productive major leaguer increase drastically, as do the odds against a player becoming a bust.

Springer falls into the "High BB, High K" category, meaning he strikes out at a rate greater than 22% and walks at a rate higher than 11%. Based on St. John's research, history indicates that such players who fit this description in Double-A boast a 46% chance of becoming a productive major leaguer. Compare that to players with High K and only an Average BB rate, which have only a 15% chance of success.

Similarly, High K, High BB players like Springer have only a 25% chance of becoming busts who never do anything worth noting in the major leagues. Compare that rate to the 74% chance of busting that Average BB High K players see.

*An interesting note: St. John identifies Jiovanni Mier as a "hidden gem" in the minor leagues due to Mier being in the High BB category. Fans should keep an eye on him and not write off the 2009 first-rounder at the tender age of twenty-two.
In addition to the Great Strikeout Problem being not such a big problem after all, Springer has steadily worked to drop into the Average Strikeout category (below 22%). As he has adjusted to the pitching at Double A, his K rate has steadily decreased. The chart below plots Springer's K/PA for every game that he played at High A and Double A during his career, and linear trend lines for both levels. 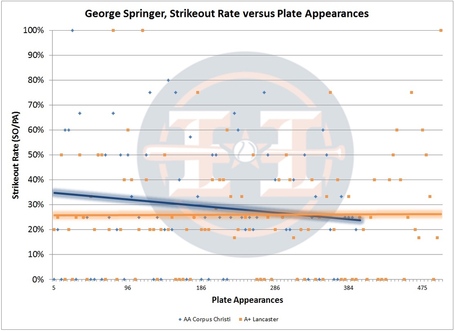 This shows that Springer seemed unprepared for the jump in pitcher skill when he started in Double A, but as he adjusted, his strikeout rate began to drop. If he continues this trend, it seems likely he could finish the year with a strikeout rate around 25%, which would ease fans' minds a bit. The next chart also shows that Springer has adjusted to new levels of competition; it displays his increasing walk rate over time. 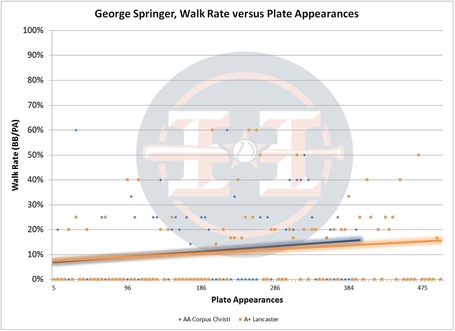 Both of these trends show that fans' minds should rest easy over Springer's strikeout rate. Not only has that strikeout rate steadily improved during his exposure to advanced pitching at Double-A, but his walk rate has improved also. St. John's research shows that the more those two stats trend in the right direction, the better chance a player has of becoming a stud.