On the Astros: Brandon Barnes and player value

How valuable a player is Brandon Barnes? Is he really going to steal playing time from Justin Maxwell?

Share All sharing options for: On the Astros: Brandon Barnes and player value

Who the (bleep) is Brandon Barnes?

I mean, really. Who is this guy? Where did he come from? Are the Astros seriously about to take away playing time from the guy who led the team in home runs last year for Barnes? That's what you're telling me right now?

That's only half joking. I'd wager most Astros fans don't have that reaction to one of the best rookies in the American League. They like Barnes' story and they want him to play more. He's deserved it by his play on the field, after all.

Barnes as a Killer B? 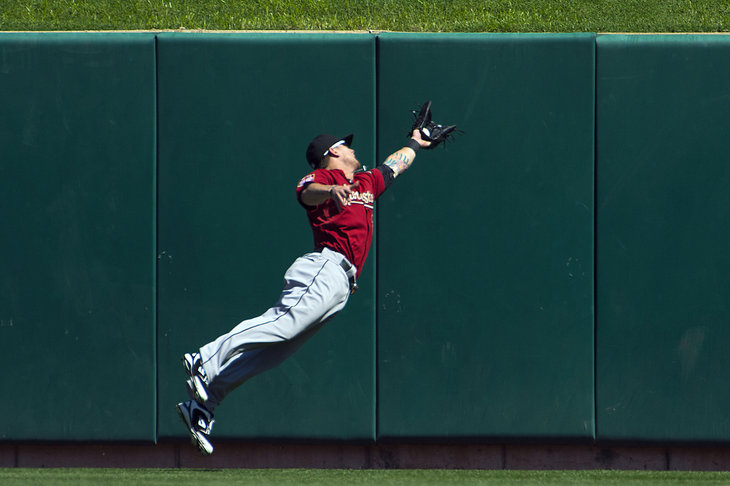 Tim nominates the outfielder for membership into Houston's hallowed fraternity.

What's interesting is that there's also been an undercurrent about Barnes. Way back in spring training, there were people dissatisfied that he might make the roster, as a more toolsy player might make more sense. Some fans wanted a player with more upside than Barnes.

And yet, here we sit in the middle of June and Brandon Barnes is starting, hitting and may just supplant Justin Maxwell as the starting center fielder.

That's pretty incredible, considering Barnes' story. But, this article from Brian T. Smith raises the question of who plays once Maxwell comes back. This is something the Astros are weighing right now. For some of you, I'm sure the answer is easy. Maxwell hit 18 home runs last season and plays great defense. Barnes can go back to being a part-time player, right?

To me, this debate breaks down into two main questions. The first concerns player value and the second concerns defensive value. Let's deal with the first one first.

Is Barnes a valuable player?

This may be the most interesting question of this half-season for the Astros. How much vaue does a player like Brandon Barnes have for Houston? Is he more valuable than Jimmy Paredes? J.D. Martinez?

We'll get to the answer in a minute. Before that, we need to run down the story of Brandon Barnes.

Drafted out of Cypress College in 2005, Barnes was a former football player just getting to know pro ball. He took a long time learning the ropes in the low minors, repeating nearly every level down there, including Low A Lexington.

By 2009, he had made it to Double-A, even if it were for a cup of coffee. He didn't have much success there, and repeated High-A ball in 2010 before getting another cup of coffee in Round Rock. By 2011, though, he was in Double-A and hitting fairly well. He got back to Triple-A that year and didn't hit spectacularly well, but got a chance again at both levels in 2012.

So, yeah, expectations weren't super high for the 27-year old who still sported rookie status heading into this season. He's not quite toolsy and his minor league numbers were strongest when he was one of the oldest players in a league that he repeated.

Neither of those things are signs of a future star. However, this season Barnes has done everything well. He's hit for average. He's drawn walks and he's played outstanding defense. He's been the second-best player by fWAR this season, totaling 1.3 fWAR before Tuesday's game. Only Jason Castro posted a higher total for the Astros.

Yes, Barnes has been valuable. His bat might cool off, but it might not. We've seen a couple of players with better prospect sheens in Paredes and Robbie Grossman struggle mightily to hit as well as Barnes has so far. Even if he's only done it in 129 plate appearances, Barnes is doing well this year. Some of those thing's he's done well are also sustainable.

Barnes had a ridiculously high batting average on balls in play in April. That fell in May and so did his averages, but things have perked up in June. His isolated slugging average is up and his weighted Runs Created total is nearly league average.

Barnes may not be the typical major leaguer, but there might be no such thing. Given this team's wide open roster, someone was bound to break out and prove themselves as a major leaguer. It appears Barnes, hitting his prime this year, may be doing just that.

That makes him valuable and means he deserves to keep playing when he can. If he cools and starts hitting as badly as Grossman did, then he's fair game to be demoted.

Aaand, we're at the point in the article where things have stretched on too long. Let's cut this into two parts and come back on Thursday to talk about the relative merits of Barnes and Maxwell in center field.