What are the odds of a draft pick reaching the majors, staying there, and performing at a superstar level?

Before I proceed with my next revelations from this study, it's confession time. Because of the way I had collected my data, the dataset I was looking at was complete junk. So I re-downloaded the draft history for 1993 to 2007, this time collecting ALL of the Top 50 picks for those years, instead of just most of them. I re-built my pivot table and am happy to announce that the overall results changed very little. But in the interest of full disclosure, here is the corrected data, before I proceed. 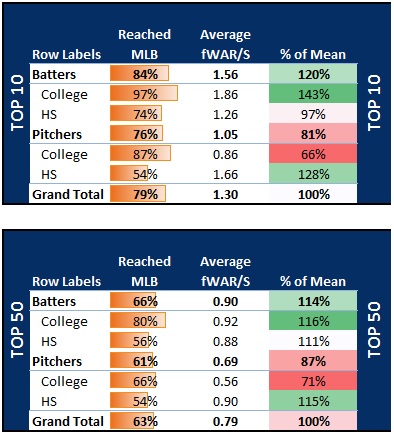 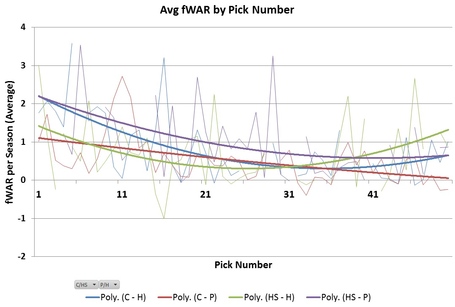 With that off my chest, now I can move on.

Since the Astros are drafting in the Top 10 - first overall, actually - simply making the majors is not good enough for the player they pick. I was surprised how many players drafted in the Top 50 only received a "cup of coffee" in the major leagues. So I sculpted the data in a way that would be more useful.

The next chart shows how many players drafted during the sample reached a 300 innings pitched (pitchers) or 1,000 plate appearances (batters) threshold out of all of the drafted players. It's not a random choice on my part; those are the inning and plate appearance totals that Fangraphs uses for players who "Qualified" to appear on their career statistics reports. 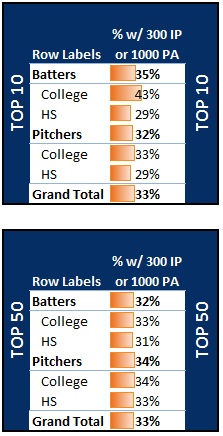 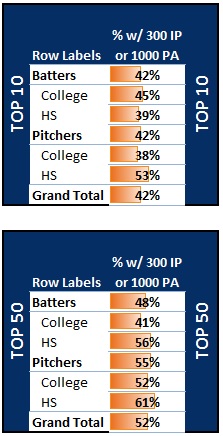 Interestingly, players drafted in the Top 10 were no more likely to make and stay in the majors than Top 50 draft picks overall (except for, again, college hitters).

What Good is Being in MLB if You Stink?

So we now know how many players in our sample made the majors and stuck in the majors. But again, if the Astros are picking 1st, they don't want a low-floor player with a reasonable chance of a long career. They need a star.

It goes without saying that finding a star in the MLB amateur draft is exceptionally difficult. I don't need numbers to prove that. But different pick types have surprising variability in the likeliness of reaching stardom.

For my sample, I'm assuming a standard normal distribution of results, meaning that very few players will have an epic WAR, few will have a craptastic one, and most of the players will fall towards the middle. Granted, it's an assumption that may not be entirely accurate, but it should be good enough to illustrate the differences between pick types. 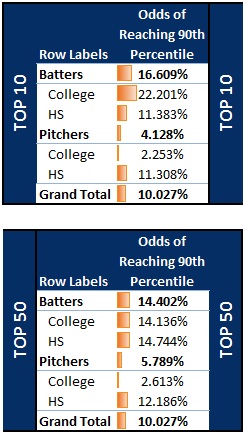 Those numbers can't be right. At least, that's what I told myself the first time I saw them. Then I sorted my entire dataset by WAR/Season in descending order. The numbers are right. Within the fifteen-year sample, only two college pitchers drafted in the Top 10 reached the 90th percentile in WAR: Justin Verlander and Tim Lincecum. Among High School pitchers, only two players reached that level also: Clayton Kershaw and Zack Greinke. The percentage is so much higher for High School pitchers because of the vastly larger number of college pitchers that made the majors at all.

As some commenters are so fond of pointing out, one can wrangle stats to give a desired appearance. I approached this study objectively, but there are some inherent inputs with my data that may make us miss some of the draft story.

Time to maturity - Because of the limitations of the data I can draw without having an intern to abuse, I had to use Career WAR as my value of choice. Some players peak earlier than others, and when talking about draft picks, the most important time to quantify their value is in the first few seasons of Major League time. Another study would show us what player type reaches his peak value fastest. Meaning, yes, my odds above look pretty bleak for pitchers, but if pitchers reach 80% of their peak war in their first three MLB Seasons while hitters reach only 50% of theirs, perhaps it balances the odds a bit. Warning: Those were made-up numbers. I have no idea what the actual numbers are, but they could affect a draft risk analysis quite a bit.

Positional scarcity - If I consider Kris Bryant to be the best hitter in the draft and Mark Appel to be the best pitcher in the draft, the odds of success favor Bryant. However, I might be able to get 80% of Bryant's production with a later pick, whereas because of the scarcity of true ace-ceiling pitchers, I might only be able to get 60% of Appel's production from a later SP pick. In other words, Preston Tucker theoretically could produce on a level that is not-quite as high as Bryant, but Rudy Owens doesn't have a prayer at approaching Appel's ceiling. Again, it would be an entirely different study to factor in position scarcity and quality depth. I'll cover this in the next post.

Caveats aside, looking simply at the success rate of players drafted in the Top 10 and Top 50 from 1993 to 2007, the following conclusions can be drawn: