On the Astros: Was execution holding Houston back in one-run games?

Bo Porter thought that Houston could have won a handful more games last season by playing better fundamentally. Has that held true this year in one-run losses?

Share All sharing options for: On the Astros: Was execution holding Houston back in one-run games?

When manager Bo Porter took over the Astros this winter, one of the things he made a point of saying is that execution had cost the Astros in many of their games last season. He went back and reviewed tape on all the one-run losses Houston suffered to check for possible ways they could have won the game.

He came up with one of the tenets he's installed since spring training. It's all about the process for Porter, and a team has to execute to win those games. He thought Houston was talented enough to win many of those games last year they did the fundamental things and executed properly.

Well, this year's Astros are just as bad as the 2012 version. So far, Porter's ways have no paid off in the win column, and Houston is still not very good in one run games. However, since teams can often have big success or failure in those one run games and see all that turn around from one year to the next, there's a certain element of luck or regression due to those situations.

That's why we're going to examine four of Houston's one-run losses to see what caused it. Was it a problem of execution? Or, was it just blind luck leading Houston to the loss? Is Porter right that this team can turn things around with solid play or is the talent gap too great to surmount?

Houston built a strong early lead with a two-run home run by Chris Carter in the fourth and two more runs in the seventh thanks to Matt Dominguez and Marwin Gonzalez. Lucas Harrell and Hector Ambriz got Houston through seven innings, but the back of Houston's bullpen proved to the team's undoing.

In the final two frames, Houston gave up four runs as the Angels pulled off a stunning comeback, capped by Albert Pujols' walkoff double.

While Pujols struck the biggest blow of the night, sending Anaheim's win probability skyrocketing in the process, there was an equally huge play that happened the inning before. Howie Kendrick hit a sacrifice fly to right field that J.D. Martinez misplayed. A run scored and the runners moved up. What's more, the next batter hit a fly ball to center field that could have been the inning's third out.

Kendrick's sac fly changed the Angels' win probability by 24 percent and it wouldn't have happened if J.D. Martinez had made the play. If the Angels don't get that extra run in this inning, Pujols ties the game with his double in the ninth off Veras.

Three days later, Houston once again dropped a one-run game. This time, it came to division foe Oakland, but it was also due to poor relief pitching. Remember when the bullpen was this season's biggest problem? Those were the days...

Houston opened the scoring in this one by getting two in the third, but the A's roared back, scoring three runs and taking a 3-2 lead into the eighth inning. That's when Carlos Pena hit a solo shot to tie the game at 3-3 and give the Astros a chance.

For one half inning. That's how long it took for Oakland's Josh Donaldson to win the game by hitting a triple down the right field line to score Josh Reddick from first. That play resulted in a win probabiliy spike of 34 percent. It was a big play.

This one's tricky. There's no egregious defensive lapses here, but there was an execution problem. See, it takes two to tango and in this case, the second to Donaldson was Houston reliever Rhiner Cruz. Let's take a look at Cruz' pitch locations for that Donaldson at-bat. 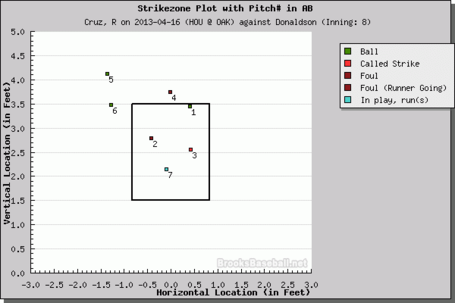 I have helpfully made sure all the pitches have been sequenced, so you can see how terrible that last one really was. Cruz had worked up high for much of the at-bat, leaving two balls in the zone on the inside and outside of the plate, but very hittable. That last pitch, though? You couldn't get more perfectly in Donaldson's wheelhouse.

All it takes is one mistake pitch to end a game.

Here be another sad tale of a reliever who lost it all. It just so happens that Hector Ambriz has been one of Houston's better relievers for much of the season.

He just wasn't so good on this night against Cleveland. This game seesawed back and forth in the later innings, with Houston taking an early lead, Cleveland roaring back to tie it and then take its own 4-2 lead before Houston tied it up with a pair of runs in the bottom of the sixth.

However, Mark Reynolds was not to be denied. The third baseman launched a solo home run off Hector Ambriz in the top of the seventh to give the Indians a 5-4 win. The play dropped Houston's win probability from 56 percent down to 32 percent.

So, was this Ambriz' fault? Did he fail to execute his pitch or did Mark Reynolds just tattoo the ball? Let's take a look: 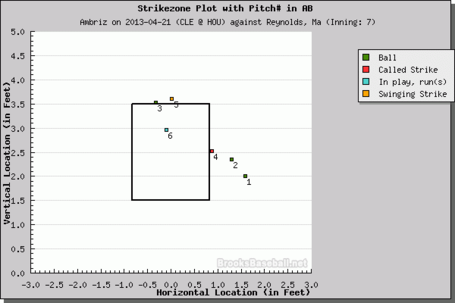 In a 3-2 count with two outs and no runners on base, Ambriz did not have to be particular. You can see that with his first five pitches, as he danced around the strike zone, trying to get the free swinging Reynolds to chase.

Then, there's that sixth pitch. It got a lot of the zone. It was elevated. It was down the middle. No wonder Reynolds hit it a mile. In this situation, I think a walk would have been preferable to the home run.

More recent, but still painful. Houston dropped the last game against New York when Eduardo Nunez scored on a double play ball. What's more, there seems to have been some very smart Yankees base coaching to make it happen give Nunez the time to cross the plate.

"The pitch before, Mick mentioned that (Altuve) was playing more shallow, so if Ichiro it softly he might not be able to turn two and might throw home," Overbay said. "As soon as Ichiro hit it, I knew it was soft enough to where I couldn’t get by (Altuve), so I stopped to wait; I was kind of expecting him to throw home, but I don’t think he could’ve gotten (Nunez), so it worked out."

So, is this an execution thing? Was Altuve lined up improperly? Or, was the ball being hit softly just luck of the draw? If it had been hit harder, the double play could have been turned before Nunez crossed the plate.

That's why I lean to put this in the luck column.

These results are not good for Porter's general philosophy. Houston has lost three of four one-run games here through execution errors. Those pitches against the A's and the Indians were mistakes, sure, but that implies they could have been avoided.

We'll check back on this as the season progresses. I'll be interested to see if the team improves in this area or if these same kinds of things happen to the Astros for the rest of the season. If so, it has to raise some questions about how effective Porter has been in his first season at the helm.