On the Astros: Passing on draft's top talent not a historically good idea

All this Colin Moran talk turns us to the past to look at draft where a team passed on the consensus top talent.

Share All sharing options for: On the Astros: Passing on draft's top talent not a historically good idea

It's nearly draft time. Thus, our minds here at TCB have turned fully to that baseball lottery in hopes of figuring out which amateurs will soon be future Houston big leaguers.

Since our draft crew has been absolutely crushing it lately, I've found myself with more time on my hands than usual at this time of year. What's a writer to do?

Dig into some historical situations, that's what.

I may not have mentioned this in the past year, but I majored in history in college. That explains why I'm not a titan of industry and am toiling away for peanuts in a dying profession, but it also explains why I'm so fascinated with looking at historical trends in baseball.

When the talk has picked up that Houston may go away from the consensus top prospect in this draft, Stanford right-hander Mark Appel, it started my historical brain thinking. We've seen teams stray from the top talent on the board at the top of the draft before. 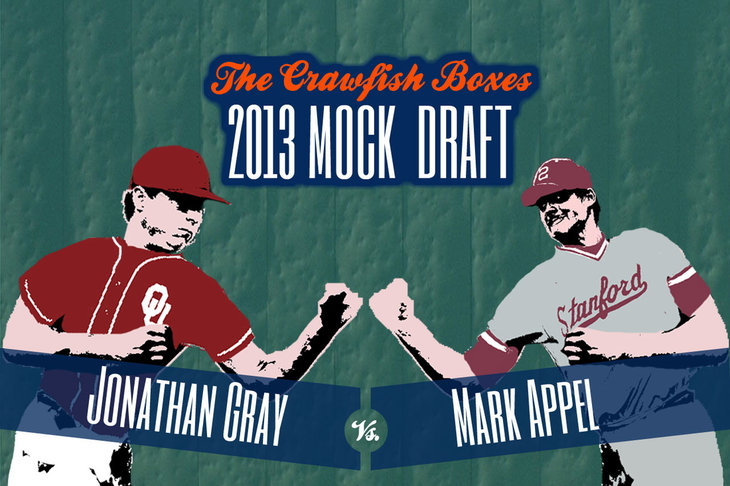 At least our draft guys toe the line and pick the top talent. That's a relief after what I find in this article.

It did not end well, or so I thought. So, I set out to verify that, by looking back 12 years to find five different situations where teams picked someone other than the top talent in their draft class and see how that worked out for them.

The first time I remember hearing about this phenomenon was in 2002. That's when the Pittsburgh Pirates decided to pass on the draft's top talent to take Bryan Bullington with the top pick. Why? Because Bullington would sign for cheaper and he did, signing for $4 million.

That was about $1 million cheaper than 2001 top pick Joe Mauer signed for with Minnesota. But, 2003 top pick Delmon Young actually signed for $300,000 cheaper, so it appears Bullington set the market a bit, though things bounced back by 2005, when Justin Upton got over $5 million to sign with Arizona.

It was the Pirates who didn't get great value from Bullington. The next pick? B.J. Upton, who was the consensus best prospect in that draft, but commanded a signing bonus of $4.6 million. Oh, and the second-best hitter in the draft was high school first baseman Prince Fielder, who went seventh overall to Milwaukee and signed for $2.4 million.

In 2001, however, the top talent may not have gone No. 1 but it didn't have anything to do with money. Mark Pryor was the Stephen Strasburg of his day, captivating baseball prospectors with his clean delivery, sterling college numbers and advanced repertoire.

Yet, Minnesota went with a rather shocking choice at the top of that draft. They chose hometown catcher Joe Mauer, out of Cretin High School in St. Paul. Pryor was snapped up second by the Cubs and the rest is history. What's interesting is that Mauer wasn't even considered the best hitter in that draft class. That honor went to Georgia Tech third baseman Mark Teixeira, who dropped because of his enormous price tag via Scott Boras.

Teixeira and Mauer both have career fWAR totals of 40.9, while David Wright has proven the best player in that first round, totaling 46.2 fWAR. Houston's 2001 first round pick was Chris Burke, picked 28 spots ahead of Wright.

The 2004 draft may be the most egregious example of the perils of passing on talent. The San Diego Padres stole a page from the Pirates and Twins playbooks, taking a cheaper prospect at the top who was also a hometown pick. The Friars tabbed shortstop Matt Bush with the top pick and he signed for $3.1 million, the lowest signing bonus of a 1-1 pick of the 2000s.

Justin Verlander, who was also the consensus top talent in that draft.

The rest of that first round is a toss-up talent-wise, with Rice pitchers Philip Humber and Jeff NIemann going 3-4 with a collection of middling pitchers, headlined by the very good Jered Weaver, and middling hitters, headlined by Billy Butler and Stephen Drew.

Still, the Padres passed on Verlander for Matt Bush. That's worse than the Chris Burke pick.

The 2006 draft brought a slightly different scenario that reminds me of this year. The Royals had the top pick in a draft where there wasn't one consensus talent at the top. Instead, there were a bunch of players all grouped closely together, with a few college arms headlining the class.

The Royals ultimately went with Luke Hochever, who had been a top pick in 2004, but who had refused to sign thanks to agent Scott Boras. The Royals did not flinch from negotiating with Boras, doing the same with Mike Moustakas later on.

Hochever has not worked out very well. But, it's not like No. 2 pick Greg Reynolds has fared any better. The No. 3 pick, and the best hitter in the draft class, was Evan Longoria. So, I mean, the Royals probably blew that part.

What's worse, the Royals passed on the unconventional Tim Lincecum because, well, he was scary. They apparently considered him, but chose to go with Hochever. Timmy then plummeted nine spots to the Giants at No. 10. Two World Series titles later, San Fran got a pretty good deal.

Oh, hey, the Royals also passed on a high school lefty named Clayton Kershaw. He's done well for himself and is the leading first round pitcher from that draft in bbWAR.

The 2008 draft is where things get interesting. Tampa Bay's new front office had the pick and went with Tim Beckham, the toolsy high school outfielder that most of baseball got behind as a top talent. It wasn't a money thing...not really. Pedro Alvarez had some buzz as being a tough sign, but that doesn't seem to be a factor for the Rays.

About a month before the draft, it appeared that Buster Posey was considered the top talent in the draft, along with Alvarez, Kyle Skipworth, Beckham and Brian Matusz. Those were the five guys Tampa Bay was considering at that point before they settled on Beckham. It appeared most of the industry knew that too, as most mocks about two weeks beforehand connected Beckham and the Rays.

Take away the failure of Beckham, because that may not have been predictable before the draft. Even then, it's looking worse and worse that the Rays passed on Buster Posey. He's already 15 fWAR and he was just drafted five years ago. Only four players in Rays history have posted 15 or more fWAR. In history!

Five drafts, four bad miscalculations. The reason for these miscalculations varies from money concerns to developmental busts to bad evaluations. And, to be fair, we're limiting the sample size a bit to make anecdotal evidence instead of the more clinical approach that CRPerry has taken lately.

Still, those four drafts are enough to scare any Astros fans as they consider drafting someone not named Mark Appel.

God help us all.