Astros Question of the Week: What's up with Jason Castro's bat?

A slight change in our normal feature, as we explore what's going on with Houston's catcher's power surge.

Share All sharing options for: Astros Question of the Week: What's up with Jason Castro's bat?

You know the drill. The last few times out with this feature, we've broken down an argument from two sides and then let you, dear readers, hash it out. This week, we're going with something a little differently. Call it the CSN Houston curveball.

That's crazy. He is not that kind of hitter, but he is insanely hot right now. But, I'm not as concerned with his ability as a hitter. Since he got drafted out of Stanford, we figured he'd hit for a good average and walk at a good clip. If he did those two things, he could be an offensive catcher for many years. 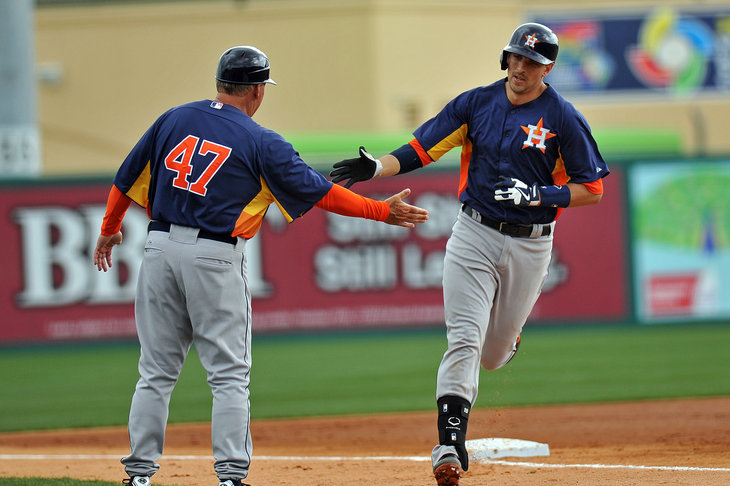 Illinibob talks about Castro this spring and predicts a power surge based on his past numbers.

The thing we thought might not come was his power. There's a bit of a controversy surrounding Stanford's approach to hitting, with many criticizing the coaching staff there for teaching a line drive swing and limiting future power potential. Castro certainly showed that line drive stroke coming out of college and for a time in the minors.

In his time in the majors, he also didn't show a ton of power. In both 2010 and 2012, Castro hit eight home runs in over 450 plate appearances. That's an acceptable total for a catcher, but not for a power hitter. Castro was also not hitting a ton of doubles, either, as his isolated power average was .082 in 2010 and .144 in 2012. Those are good totals quite in line with his minor league performance, when he posted an ISO over .110 just once and that was in the hitter haven of Lancaster.

This year, Castro has been hitting like crazy. His ISO is up to .200 this season and he's already equaled his home run total from last season with six, in about 130 less plate appearances. He's also got 13 doubles, which is also up significantly from his 2012 total of 15.

What's up here? We know Castro went HAM in the spring with the longball, but we couldn't know that would carry over to the regular season, what with the vagaries of spring performance. Has Castro changed his swing or just developed more power?

Well, we can look in a few different places first before throwing it to the audience. First up, his batted ball profile, courtesy of FanGraphs.

Fewer line drives than last season, fewer ground balls than he's hit in either of the last two seasons and a ton more fly balls. Add in a big jump in his home run per fly ball ratio and this power surge seems a little fishy. If we were just going on luck, I'd suggest Castro is due to see some regression there and will probably end up hitting for slightly more power than last year, but not more.

We do have one more source to call upon before crowdsourcing, though. ESPN's invaluable Home Run Tracker has given us information on all of Jason Castro's home runs in his career. Now, the sample here is small, so we can't draw any solid conclusions from it, but it could point us in a better direction.

Castro is hitting his home runs longer and with slightly more velocity than in previous seasons.

So, Castro is hitting his home runs longer and with slightly more velocity than in previous seasons. That tells us something concrete about his power increase, but as I said above, it's a pretty small sample size. In looking at the actual home runs, ESPN also breaks down whether the hit had "Just Enough" to clear the fence, had "Plenty" of room or was "No Doubt." Four of Castro's home runs last year were Just Enough and four this year have been Just Enough with two more each year falling in the Plenty category. He's only hit one No Doubter in three seasons.

But, numbers can only tell us part of the story. What about his swing mechanics? Has anything changed there? Here are three clips from MLB's YouTube page of his home runs.

I don't know about you, but two of those three swings look pretty line-drive-y to me. Only one has some loft on it, from the camera angle, while the other two were Castro doing what he could with the ball and taking the pitcher opposite field.

Since I don't regularly get games on TV this year, it's hard for me to judge whether Castro has changed something fundamental in his swing plane or in his timing. That's why I thought this a great topic for our Question of the Week series. I'll ask you, TCB Readers.

What is going on with Castro? Has his swing changed or is he just lucky in this early season period? Where will his true power fall?