Tonight's game was initially exciting for me. As a Saturday national broadcast on Fox, I was able to finally watch my team, and last night's deflating loss at least showed some positive signs for the Astros offense and starting pitching. Tonight's first inning went smoothly, as Lucas Harrell looked sharp by retiring the A's in order, while Jason Castro lined a home run that just snuck over the left field wall. Then, the second inning happened.

When it was all said and done, the Athletics put up a six spot and sent twelve men to the plate. The A's grabbed the lead on a Chris Young double off the out of town scoreboard, continuing his domination against his hometown team. Seth Smith had two hits in the inning, the first on a bunt for a hit while the Astros defense was shifted to the right. Cue anti-Astros sabermetric approach from the CBS writers in 3...2..1. All six runs came against Lucas Harrell, who only lasted 1.2 innings, allowing 6 hits and 3 walks. Harrell's rough start increased his ERA to an ugly 5.43.

Josh Donaldson also reached base twice in the inning, continuing his fine season as the A's third baseman. He's now hitting .321 with 7 home runs and 30 RBI. Donaldson's also playing some great defense at third; his UZR/150 6.5 and he was automatic on Friday night. Don't be surprised to see Donaldson in the conversation for an All-Star nod in July if he keeps up his hot start.

The lone bright spot for the Astros tonight came on offense. Matt Dominguez hit his sixth and seventh home runs of the season, both bombs to the Crawford Boxes. All of a sudden, Matty D has 24 RBI and an OPS of .715. Jason Castro added two homers of his own, giving him six on the season. Castro and Dominguez combined to go 5-for-8 in the game, while Jose Altuve also showed some signs of breaking out of his slump, reaching base twice via a single and a double. He put a good swing on the final out of the game, a long flyout to Coco Crisp in centerfield.

This game was another example of the Astros' starting pitching putting the team out of the game early. Lucas Harrell's start was a disaster, but Edgar Gonzalez's 4.1 innings were equally difficult to watch. He allowed 4 runs on 8 hits, including back to back homers by Donaldson and Brandon Moss. I'm struggling to figure out why Gonzalez is still on the roster; we have pitchers capable of filling the long relief role in Travis Blackley and Jose Cisnero, and I would much rather see a Josh Zeid or Jason Stoffel called up from OKC instead of watching Gonzalez throw high 80s meatballs over the plate.

It can be demoralizing for a team when they're down by eight runs in the fourth inning, but credit the Astros offense for showing a little fight with the power and eight hits. Hopefully the offense continues this momentum into tomorrow, and Dallas Keuchel can put together another strong start.

MVP of the Night: A.J. Griffin, not because of his average outing with three homers allowed, but because he got me seven additional points for my fantasy team with the win.

LVP of the Night: Coco Crisp, not because he reached base four times and continues to murder Astros pitching, but because he will haunt my dreams in the form of sprinting full-speed around third base with his helmet flying off.

I'm not Tim so no GIFs tonight. Instead, enjoy some of the more snarky tweets I saw tonight as I live-tweeted the game. 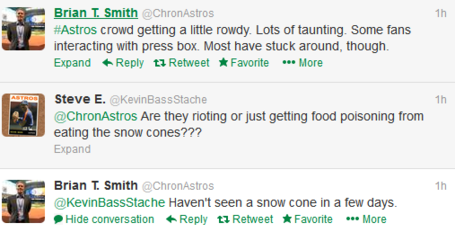