Lance McCullers, Jr. missed out on a lot of preseason Top-100 lists, and we speculated at the time that he had just missed out on many of them. His emergence into the MLB.com Top 100 Prospects list confirms it. That makes six Astros prospects now on the list: Jonathan Singleton (25), Carlos Correa (28), George Springer (52), Jarred Cosart (82), Delino DeShields, Jr. (93), and McCullers.

Speaking of Springer... while discussing McCullers' movement onto the list, the TCB staff began to discuss some of the members of the Astros farm system, and one George Springer came up. The specific question was whether or not his strikeout rate was likely to prevent him from becoming a star (through 42 games, Springer had a 29.0% strikeout rate). First, let me say that opinion is mixed. Now, let me take you on a journey.

Beginning with the 2006 season, FanGraphs allows you to sort statistical leaders in the minors. When searching for Texas Leaguers who had a 28.0% or higher strikeout rate, a grim assortment of busts came scrolling through my computer screen. Names like Brandon Wood, Taylor Teagarden, and Mike Wilson.

As clack points out, there has been a baseball-wide trend upward in strikeout rates. Simply, it's becoming part of the game. Maybe this doesn't mean anything. But it's not exactly the grandest list to appear on, at any rate. 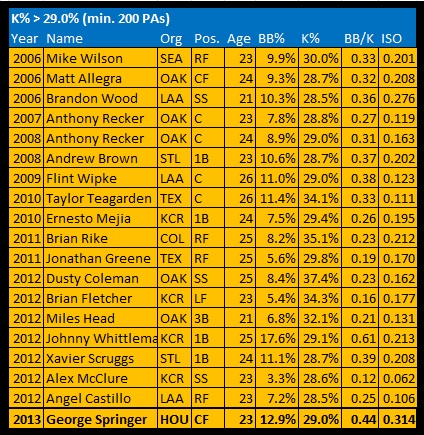 Continuing on our trend, here is a list of the highest K% in the Texas League this season (min. 100 PAs): 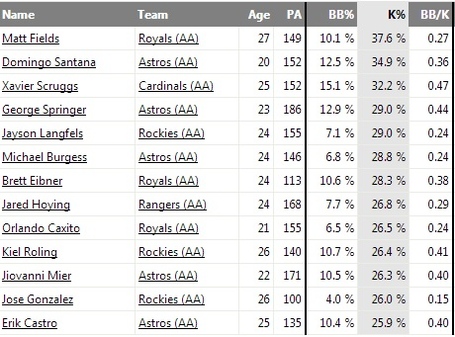 I'm sure I don't have to point out how many of them play for the Corpus Christi Hooks.

And Now For Something Completely Different

This is not minor league-related (yet.) I don't care.

Mark Appel has one of the biggest starts of his college career today, when he goes up against UCLA in the last regular season series he'll ever have. His team's postseason aspirations are almost nil. The pressure is on. So what did he do to prepare? If you guessed dancing with kids at a children's hospital, then you're good. Real good.

Not sure how his draft stock will be affected by his 20 dancing tool. We'll have to wait until June 6 to find out.

On Sunday, Tyler Heineman hit the first home run of his professional career. It matched his career college numbers. The last time Heineman hit a home run, it was February 21, 2012, and he was in college. The pitcher was Harper White of Cal State Northridge, who'd spent the previous two seasons as an outfielder for Oxnard College. White only made it a third of an inning, though he'd pitch against Washington later that season and record three strikeouts, which improved his college career numbers: 2 G, 0-1, 1.1 IP, 4 H, 9 ER, 6 BB, 3 K.

Which makes it especially uncanny that last night, he hit his first professional triple. Within a week of his home run. Don't ever let anyone tell you that Lancaster isn't a ridiculous run environment.

Heineman also only hit one triple in college, though for that one you don't have to go back quite so far. It came on March 24, 2012. It came off of Washington State's Richie Ochoa. He also hit one triple his senior year of high school. He's on a roll.

Max Stassi took a little while after coming back from injury before he started to make an impact, but after yesterday, he now has a nine-game hitting streak. In three of those nine games, he's had multiple hits, including 5 doubles.

Delino DeShields made an appearance last night after being day-to-day with a contusion suffered when he was hit by a pitch. Coming into the game, he was 7-for-14 in stolen base attempts on the season. Leaving the game, he was 9-for-16, after stealing second successfully, followed immediately by a successful double steal with Joe Sclafani.

Man, that Delino sure does have some wheels. Don't believe me? Watch this:

Check this out. Weird, right? I before E, except after UCLA. Or something like that.

RedHawks First Baseman has been on something of a tear lately. He's hitting .319/.391/.580 on the season for Oklahoma City, and .357/.413/.595 over his last ten games. Over the course of the four-game set in Fresno, First Baseman had three straight multi-hit games, going .467/.579/.579. He had three strikeouts in the second game of the set, but rebounded with two straight multi-walk/no-strikeout games.

Oklahoma City RedHawks (AAA) - Jarred Cosart allowed just 2 runs on 6 hits, 2 walks, and 6 strikeouts over six innings, but he couldn't get any run support. Philip Humber entered in the seventh and Humbered the joint up, hitting the first batter he faced, recording the only out of his appearance on a sacrifice bunt, and then walking the next two batters before Kevin Chapman came in and closed the door by striking out the first two batters he faced. Rhiner Cruz followed, allowing the first batter he faced to single, and the second to hit a home run. But it didn't matter, as the RedHawks' offense was unable to scratch together more than one run. The RedHawks fell to the Fresno Grizzlies (SFG), 4-1.

Corpus Christi Hooks (AA) - After Bobby Doran allowed a solo shot in the second inning, the Hooks rallied back with three runs of their own in the bottom of the frame, and they would never look back. Max Stassi and Jonathan Meyer paced the offense with three hits each, the Doran-Nicholas Tropeano piggyback bent but did not break, and the Hooks walked away with a convincing 10-4 win over the Northwest Arkansas Naturals (KCR).

Corpus Christi: 27-19, 1st Texas League South
Lancaster Jethawks (A+) - Tyler Heineman hit a triple. Jethawks win. I mean yeah, I guess I could tell you more, but that's all you need to know. What else? 4 errors for each side, including 2 by Joe Sclafani (who also ended his hitting streak at 9 games). Preston Tucker continues to heat up, with his third-straight game with three or more hits. With the game tied at 7 in the bottom of the 8th inning, Heineman hit his first career triple, then came home on a wild pitch (Inland Empire's 3rd of the game). You know. Cal League baseball. Jethawks beat the Inland Empire 66ers (LAA) 8-7 to knock the 66ers out of first place in the division and reclaim the lead.
Lancaster: 26-20, 1st California League South
Quad Cities River Bandits (A) - It was Disco Night. People ate chicken. Vincent Velasquez struck out eight batters through four innings, allowing a single hit, a single walk, and no runs. Unfortunately, by the time he took the mound, Quad Cities was already down by seven runs. Ariel Ovando was an offensive highlight. It was that bad. Teoscar Hernandez had a golden sombrero. Rio Ruiz and Carlos Correa each walked twice, though neither got a hit. Correa had an error. These things happen. This particular thing has happened six times this season. Six is a funny number. It's also the number of games Quad Cities has lost in a row. Wisconsin Timber Rattlers (MIL) 7, Quad Cities River Bandits 4.
Quad Cities: 23-22, t-4th Midwest League Western