Only two Houston affiliates took the field in yesterday's action, but between them, they scored enough runs for the whole organization.

The official time of Lancaster's game yesterday was 3:34. Add in batting practice and other various odds and ends, and the players were probably at the ballpark for something in the neighborhood of seven or eight hours. And while you or I might go home after such an affair and slump onto our couches, that is because we all suffer from the same symptom: We are human. Chris Devenski, Tyler Heineman, and Aaron West, on the other hand, are superhuman. Thanks to Jennifer Adamczyk, the Jethawks' Community Relations Manager, I would like to present a picture: 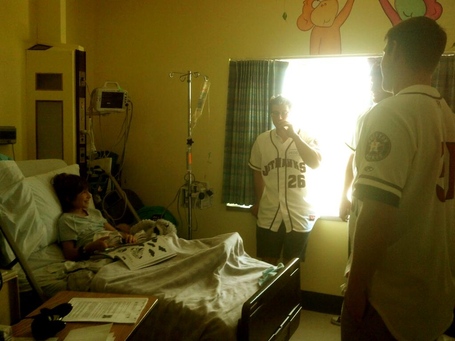 After the marathon of a game, Devenski, Heineman, and West traveled to the Pediatrics ward at a local hospital to visit with sick kids. Because these three men are awesome. Thanks to Jennifer for allowing me the use of the photo.

I've been meaning to post this one for a while, but I never really took the opportunity. There was a nice story last week in the Oklahoman about the RedHawks' "Field Trip Days." Twice a year, the RedHawks play day games, which thousands of kids attend on school outings. For many of the kids, it's their first opportunity to attend a professional baseball game, and this one example of how the minor leagues can make an impact beyond the immediate reach of a major league ballclub.

The article itself is nothing spectacular, but it's worth a click for Paul Hellstern's photography, including probably the best picture I've seen yet of Asher Wojciechowski.

This isn't Astros-related, but the Stockton Ports' shortstop, Wade Kirkland, hit a 2-run walkoff home run in the bottom of the 17th inning as Stockton beat the Lake Elsinore Storm, 11-9. That's not even the impressive part, though. No, the impressive part is that Kirkland was also the winning pitcher in the game, giving up two hits, a walk, and one earned run over the final two frames.

This is the second time Kirkland has been forced to the mound this season. The first was on May 10th in Lancaster, where he pitched the final inning of a 19-13 Jethawks win. He allowed just one hit, no runs, and struck out one.

This is impressive particularly because Wade Kirkland didn't pitch in college at Florida Southern. He was never considered a two-way prospect, unless he was out of high school, which I don't know.

It all sort of reminds me of Jethawks hitting coach Darryl Robinson. While researching the team, I found out that Darryl had been forced into service as a pitcher during his days as a Royals farmhand, in four different games, spread across two seasons. When I asked him about his career 2.25 ERA, he laughed and said he had no idea until last year, when Travis Driskill told him. So I asked him if he had pitched in high school, and he said that he hadn't. "That team was trouble," he told me. "I was playing shortstop and batting cleanup. You know how many shortstops batted cleanup in 1991?"

Oklahoma City RedHawks (AAA) - Lots of interesting things in this one. There was a Grand slam by RedHawks First Baseman. He and Brandon Laird switched positions, and guess which one had an error (you're wrong). Fernando Martinez continued his torrid pace (over his last four games, he's hitting .500/.556/.813 with 2 walks and 2 strikeouts.) Brett Oberholtzer spun a gem, striking out 9 over 7 innings and walking just one. Lots of good stuff here - and the RedHawks beat the Frezno Grizzlies (SFG) 15-2.

Lancaster Jethawks (A+) - What do you like? You like offense? Great, because there was plenty of it here. The Jethawks had a season-high 19 hits. After giving up 5 runs (4 earned) in the first inning, starter Kyle Hallock settled down, not allowing any through the next four. During that time, the Jethawks tied things up and pushed ahead on a Carlos Perdomo sac fly. Luis Cruz entered in the sixth inning, and the second verse was the same as the first. He allowed three runs, but the Jethawks offense got four in the bottom of the frame. All told, there were six lead changes, but the Jethawks prevailed, 13-12, against the Rancho Cucamonga Quakes (LAD). Delino DeShields, who was hit by a pitch in Monday's game and left early, was replaced in the lineup yesterday by my personal favorite, Joe Sclafani, who - along with Perdomo, who covered shortstop; and Andrew Aplin - provided a powerful punch at the top of the lineup.