A wild one in Quad Cities and a mild one in Corpus Christi; scores and highlights from throughout the Astros minor leagues.

Okay, we have a lot to talk about, so let's just jump right into the moves, shall we?

Is that everything? I think so. Good. Moving on.
Can we all just take a minute and acknowledge that this is a really stupid headline? 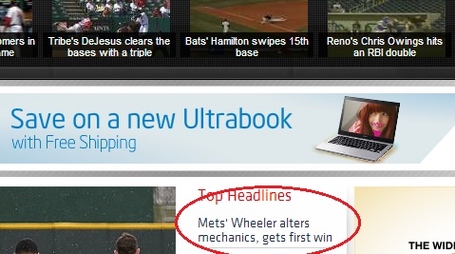 Honestly, it makes it sound like Zack Wheeler has never won a baseball game before, but moments before yesterday's start, he decided he'd try squaring his shoulders to the plate more, and bam! Number one pitching prospect!

Now where were we? Right, the Astros minor leagues.

In 2012, the Oklahoma City Redhawks swiped 34 bases in the month of June, their biggest single month total of the season. After last night's game, their April 2013 total stands at 35, including 15 over their last 4 games. And that also includes Jonathan Villar stealing home plate. That happened. You can't say it didn't, because it did.

Speaking of the RedHawks...

Two members of the 2011 Corpus Christi Hooks were on the field at Whataburger yesterday: J.D. Martinez was on hand to begin a rehab assignment following his DL stint after spraining his right knee; and Jacob Goebbert was back, after being traded to Oakland for Travis Blackley.

What's the Opposite of a Golden Sombrero?

Ryan Dineen drew four walks in the River Bandits game today. I don't know the terminology for this. If it was strikeouts, it would be the golden sombrero. Is it a different type of hat? I'm not current on my haberdashery; perhaps the golden fez? The jeweled beret? The resplendent tam o'shanter? I'm going with the Goldsteinian fedora. That'll stick for now. Congratulations to Ryan Dineen on his Goldsteinian Fedora. Joe Sclafani came close to joining him, but wussed out after three walks.

Oklahoma City RedHawks (AAA) - There wasn't a lot not to like about Jarred Cosart's night on the mound. He threw 93 pitches, 57 of them for strikes. He struck out 6 over 5.1 innings and walked two. He allowed just one earned run. All told, he was very effective, and he earned the win, improving his record to 3-0 on the season, with a 2.63 ERA as the RedHawks beat the Nashville Sounds (MIL), 4-2.

Corpus Christi Hooks (AA) - Before we begin, I would like you to watch this video of George Springer hitting a home run. Keep watching, because the last half is pure magic:
Okay. Well, there were no home runs hit in this one. There wasn't much of anything hit in this one, as only four Hooks - and only five RockHounds - had hits, and none of them went for extra bases. Jake Buchanan and Murphy Smith faced off in a pitchers' duel, supported by Carlos Quevedo, Alex Sogard, and Jeff Urlaub. Smith was the only one who blinked. Erik Castro drew a walk in the third, advanced to second on a Ben Orloff single, and came home on a Rene Garcia single. Home team beats the Midland RockHounds (OAK), 1-0.
Lancaster Jethawks (A+) - Let's just say this first: The Jethawks faced big leaguers Alberto Callaspo and Mark Lowe on rehab assignments, as well as the Angels' #9 prospect, Mark Sappinger, and they almost came out winners. If you're a critical thinker, you might have already figured out from that that Lancaster lost to the Inland Empire 66ers (LAA) 3-2. Delino DeShields was 0-for-14 against the 66ers this year before recording a hit in this game. But the story of the game was Luis Cruz, who pitched an excellent game for the Jethawks. With Aaron West on the DL, it was announced that Cruz would be followed by the bullpen, rather than by another "piggyback" starter. 5 innings and 82 pitches after he took the mound, he'd allowed only 2 hits, 2 walks, and 0 runs, and had struck out 5. Cruz has been a very pleasant surprise this year. Thomas Shirley hasn't had as much luck, as he blew the save and recorded his second loss of the season - unlike the first, he did get to throw more than one pitch, at least. Perhaps the saddest news in this one was that Matt Duffy saw his hitting streak end at 15 games.
Quad Cities River Bandits (A) - Something happened. I mean something happened. The Great Lakes Loons (LAD) did something to upset the River Bandits. They must have, or else Quad Cities wouldn't have unleashed the whooping they put on the Loons. The final score was 17-6, but five of Great Lakes' runs came in the 7th and 8th, after the game was decided and an obscure Midwest League rule was put in place that required River Bandits pitchers to throw underhand. In truth, Vincent Velasquez gave those five runs up (four earned) in 2.2 innings, blowing his ERA all the way up to 2.45 on the season.
And then there's that thing about Correa's hand. I'd rather not talk about it.
And now, for something completely different...
Because you've been kind and patient and wonderful, I'd like you to hop into my time machine and travel back to a wonderful time called "2007." In the video below, it is 2007 and a young high school junior named Mark Appel is batting. There are some things that you should think about while you watch this video.