Trying to figure out why Astros left fielder JD Martinez was removed from Monday nights game against the Seattle Mariners after making a mental mistake in the batters box on only one pitch.

Share All sharing options for: Identifying JD Martinez's 'Mental Mistake' In One Pitch

Well if you didn't stay up late last night, you missed a rather uneventful game, that is until post-game interviews were completed.

In the bottom of the fourth inning JD Martinez was pulled after an at bat in which he popped out to second base on one pitch. He was replaced by Rick Ankiel in the outfield due to what Bo Porter described as a mental mistake. Comments after the game were very vague. Brian T. Smith of the Houston Chronicle and Brian McTaggart of MLB.com provided the quotes below.

"That was a manager's decision," Porter said. "You go ask him why he didn't finish the game. I'm actually interested in what he's going to tell you."

"From a baseball standpoint, I made a mistake (Monday)," Martinez said. "I had a mental error going up to the plate. It was totally my fault. I understand everything Bo did taking me out. I hold nothing against him, because what I did was unacceptable. It was a mental mistake that will never happen again."

"It was just something going up to the plate, our plan and everything," he said. "I got caught in the moment and really didn't take a step back. The game was moving quick and I totally slipped, and I take full responsibility for it."

"I completely get it," he said. "I don't want it to come off as me being selfish and not being about the team. That's not what my intentions were. You just get caught up in the game sometimes and you want to go up there and you want to hit so bad and your plan sometimes just flies out the window."

Not much to go on. What we do know is that according to Martinez it involved a "hitting issue that had been discussed during a pregame batters' meeting."

I'm not a big fan of Porter deferring to Martinez for the reason why. If Porter is going to be vague I would prefer him saying something along the lines of "it has been handled" instead of putting Martinez out there on display. I don't have a problem with it though if it's a teaching moment and Martinez becomes a better player for it; however, if Martinez never figures it out this did nothing to help his development. Regardless of how Porter handled it something still doesn't feel right.

Martinez would not say whether or not he was pulled because he swung at the first pitch in an at bat. Here's the pitch from MLB.com's Gameday: 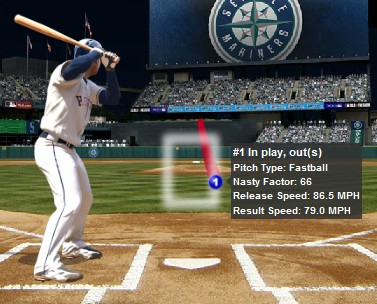 The thing is both Chris Carter and Jose Altuve both produced outs on one pitch. Carter did it right before Martinez did it in the fourth and Altuve did it to end the fifth inning. Neither Carter or Altuve were pulled from the game. So I'm not sure it was just swinging at the first pitch. Brandon Barnes also swung at the first pitch in the second inning and Jason Castro and Ronny Cedeno did it in the seventh inning. The difference was that all three of those batters fouled off the pitch they swung at.

Here are the at bats for Chris Carter and Jose Altuve: 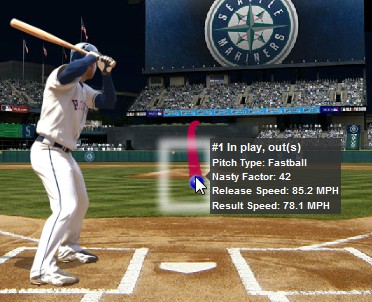 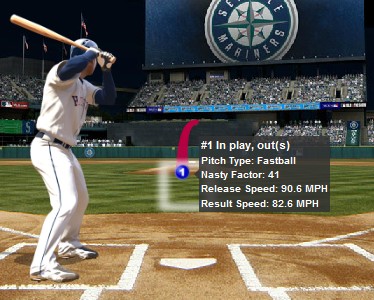 Lets look at the guys that fouled off the first pitch: 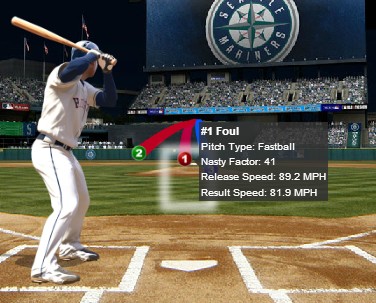 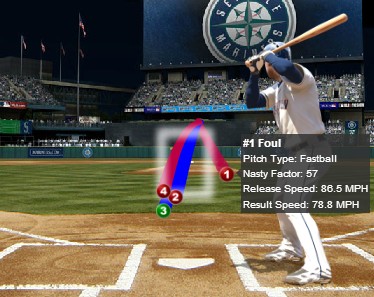 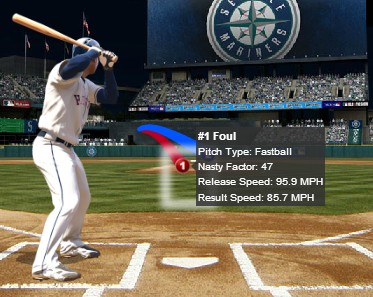 The Astros had 34 plate appearances in the game on Monday night and only five times did Astros hitters swing at a first pitch strike. Looking back at some of the at bats Carter and Martinez took you can see that they didn't really have much interest in swinging at the first pitch in the first inning. 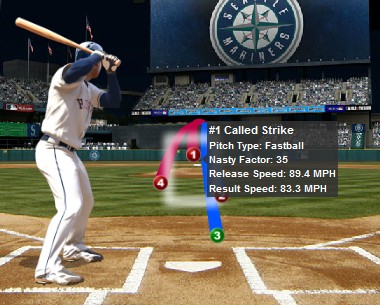 The first pitch Martinez got was a two-seam fastball right in a hitters happy zone, belt-high and right in the middle of the plate. Maybe in his next at bat he thought he would get a similar pitch and so tried to take advantage. If Martinez was paying attention to Carter's at bat in the fourth inning he would have seen another two-seam fastball given to Carter right in the middle of the plate. Joe Saunder's got first pitch strikes on 13 of the 25 batters he faced.

We're not privy to what was said in the pregame meeting. It is safe to assume that the Astros are taking a more analytic approach to pitchers and their tendencies and adjusting the hitters strategy accordingly. Which I'm fine with but I think there has got to be room for a hitter to make an adjustment if he feels it is necessary. These guys have refined their skill in the minors and now they have to change or adjust their approach to a strategy they may not necessarily be familiar with.

I don't think it's swinging at the first pitch. I do think JD was supposed to take the first pitch after Carter was out on one pitch. I think Porter and the coaching staff wanted to avoid what happened in the fourth inning: three outs on five pitches. Based on that I would not consider JD Martinez selfish but I could see where that could be applied if he was supposed to take a pitch there. If that is the case then I still think it's a bit excessive and could have been handled behind closed doors especially since we didn't get any particulars.