Under the Microscope: Bud's Killer Slider

Bud Norris' slider is such an awesome pitch that deserves an article of its own.

Share All sharing options for: Under the Microscope: Bud's Killer Slider

Last week, I explored some possible reasons for Bud Norris' struggles in 2012 compared to 2011 and came to the conclusion that his changeup is suspect of being terrible. Given a readership with an unlimited attention span, I could have taken that article another 5,000 words, exploring his other pitches, splits, favorite color, and everything else that impacts his performance. I won't do that; you are welcome. However, there was one subject that I brushed against ever so lightly that is worth discussing in a bit more detail.

Bud Norris has a devastating slider.
"We know that!" you all scream at your monitors or smartphones.
To which I reply, "Yes, but how good was it last season?"

In 2012, more than one out of every three baseballs that Norris hurled were sliders, and he threw that pitch to great effect against batters of both handedness' persuasion. Half of Norris' sliders resulted in an outcome that was unquestionably pleasing to the Astros - a non-foul strike or a ball put into play that the defense subsequently turned into an out. The rate at which Norris earned a positive outcome with his slider was 10% higher than the average Right-Hander's was last year.

Considering that many (I'd say most) of the most effective sliders are thrown by relief pitchers because of their ability to rear back and give every pitch everything they've got due to not needing the stamina to last several innings, Norris' success rate with sliders was even more impressive when stacked up against other starting pitchers.

Norris also generates a higher number of foul balls than your average rightie, which can also be considered a positive outcome. With fouls included, six of every ten sliders that Norris throws results in something pleasing to the pitching coach. The other four pitches either go for a ball (and that's most of them!) or are turned into a negative outcome.

Norris also generated far fewer negative outcomes with his slider than all other MLB RHP's. Only 6 out of every 100 of his sliders resulted in either a runner reaching base or a runner scoring after contact. That is also below the MLB average for right-handers, and a good sight better than the 11% failure rate that Norris gets with his changeup.

To put that into a game day perspective, if Norris throws 100 pitches in a game, and 36 of them are sliders, only two of those pitches result in the batter reaching base or knocking somebody else in. Just two. Bud also does a comparatively good job with limiting balls with his slider, and throws about 5% fewer balls with his slider than other RHP's do with theirs.

So what does this mean? It means he should continue to rely on this pitch and perhaps favor it in situations where he might have ordinarily used a less successful pitch (changeups versus left-handers, for example, which has half the success rate as his slider versus lefties). It means that Norris has at least one very strong and very marketable skill that can be leveraged into wins and/or fun trades.

I'm recalled of Wandy Rodriguez' curveball. Most of his other pitches were not memorable, but Wandy's curveball was a true wipeout pitch when he was with the Astros. Norris has an exceptional fastball, (a different topic that I probably won't write a separate article about) but his slider is a truly special pitch.

What Makes a Slider Great?

A slider is a pitch that is thrown with an incredible amount of spin that would appear counter-clockwise to a batter when thrown by a RHP. That spin, coupled with velocity and gravity, is what gives the slider its sharp break. The break is the movement on the ball, which for a slider is typically downwards and away from right-handed batters and towards lefties as they stand at the plate, hopelessly confused.

The effectiveness of a slider is in the fact that its break is typically later than other breaking pitches (curveballs, etc), and it can look like a fastball at first after leaving the pitcher's hand. Here is what a batter experiences when facing a good slider: 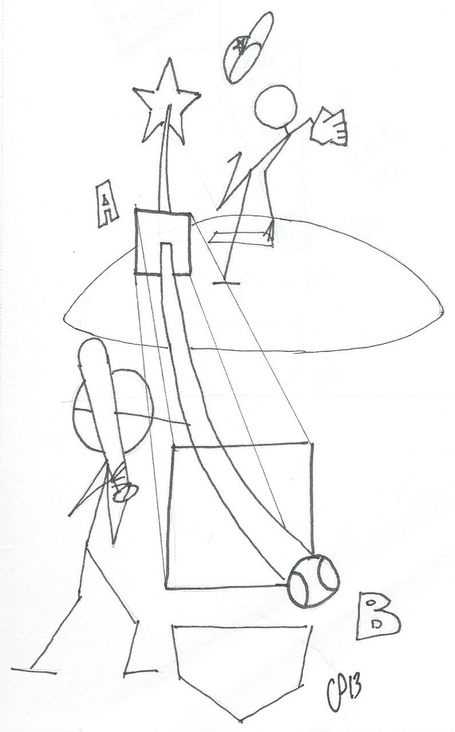 There are several factors that define a pitch, but the chief drivers of pitch greatness are speed and spin. On the surface, speed's most important purpose is to get the ball past the hitter before the bat can catch up to it. Speed's deeper, more obscure purpose is to combine with the spin of the ball to create break.

Sliders are great because they are quickly breaking pitches - they have a short break length and a sharp break angle. Whuhhuh you say? OK, here: 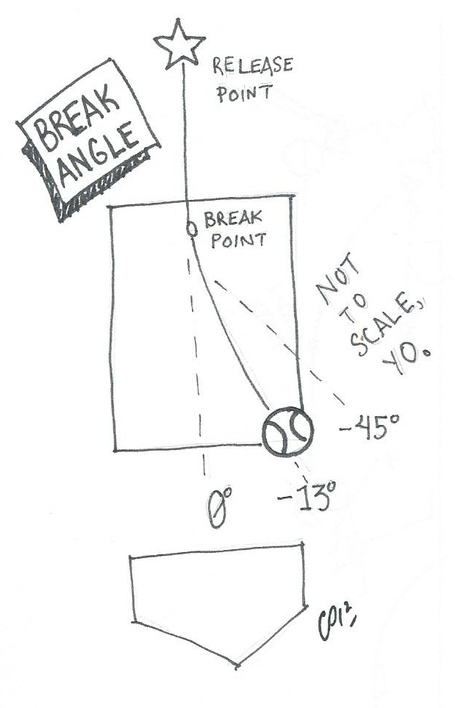 Bud Norris' slider was fairly average in terms of break angle and length when compared to other righties in 2012. However, he threw his slider with an average speed that was about 1 mph faster than his peers.

Everybody Likes a Comp

Despite the stigma that two-pitch starters are destined to fail or get injured, many starters are extremely successful with throwing their sliders between 30-40% of the time and their fastball most of the rest of the time. 2012 starters who fall in this category included Madison Bumgarner, CC Sabathia, Ryan Dempster, Ervin Santana, Edwin Jackson, Tommy Hanson, and Chris Sale. Not bad company for Norris to be in, considering the average WAR of those guys was 2.5, with Santana bringing down the curve. Most of these guys (small sample alert!) are pretty healthy too, and have avoided the injuries that some people claim come with throwing too many sliders. It's worth noting though, that among those pitchers, only Dempster, Santana, and Bumgarner threw an equal or higher percentage of sliders than Norris in 2012.

So in further evaluating Norris' slider, I decided to find out which fellows have a pitch that best compares. The criteria I used was the initial pitch velocity, the angle of the break, and the length of the pitch break. The math involves stuff like standard deviations that nobody really cares about in context of this article. Here's what I came up with:

Out of all the right-handers who threw at least 300 sliders last season, the starting pitcher whose slider compares best to Bud Norris' is:

There you have it. The one slider in major league baseball that compares to Bud Norris' slider belongs to a guy who won a Cy-Young award.

I guess if I had to summarize this whole thought experiment of using Pitch F/X to over-analyze Bud Norris' results over the last two seasons, I could break it down into two points: