A starter got rocked, roster moves abounded and F-Mart made a triumphant return all in one three-game series.

Share All sharing options for: Houston Astros Weekend In Review

We're trying something new this week. For you readers who pop in while at work, you might have missed some of our coverage or some of the happenings with the Astros this weekend. Here's a brief rundown of the key points from a busy three days of Astros baseball.

Let's start with something you should go read (if you missed it this weekend). In our latest installment of Astros History, Anthony took a look at a forgotten Astro, Kenny Lofton. It's a great read on an interesting case of a top prospect dealt before getting a major league trial.

Maybe we'll be looking back at Jake Goebbert in the same terms some day.

J.D. of the Martinii got hurt

It wasn't pretty, but Tim still forced us to look at a gif of it. So, I'm contractually obligated to share that here (actually, in the side bar to the right. But, you get the idea).

Martinez was hurt in the fourth inning of Friday's game. After taking an awkward check swing at a pitch inside and at the knees, Martinez laid on the ground for several minutes as the Astros training staff checked out the injury. Martinez was eventually helped off the field and replaced by Brandon Barnes.

J.D. was initially said to be day-to-day with the injury. We'll get to more on that in a minute.

I mentioned this on the podcast Sunday, but I was really trying to get to Saturday's Jose Altuve Bobblehead night. One of the perks of covering games is they hand out the giveaway of the day to everyone in the press box.

I know. Hate me all you want for getting in free and nabbing cool stuff. Then remember that I actively tried to get into a dying industry that may not exist in five years. I can take any win I can get at this point.

At any rate, I quickly appreciated the circumstances preventing me from seeing that horror show of a two-inning stretch to open the game. Phillip Humber couldn't even get out of the first inning, after looking like one of the better parts of the rotation until then.

Dallas Keuchel fared no better, but it was Humber's start that stung. He marked the third time in the past week that a Houston starter failed to get out of the first inning. He overtaxed an already depleted bullpen.He pretty much F'ed us in the A.

Oh, and that disaster on Saturday led to...

A flurry of bullpen-related roster moves

After playing with a 24-man roster on Friday, Houston brought things up to 25 on Saturday by reinstating Travis Blackley from the disabled list. Good thing, because he was called on to pitch immediately after the Humber meltdown happened.

On Sunday, the roster moves continued, as Dallas Keuchel was sent down and replaced by another lefty in Brett Oberholtzer, so Houston could have a long man who was rested in the bullpen.

Oberholtzer got into Sunday's game too. He didn't pitch poorly, but he's no Paul Clemens. Then again, who is?

Fernando of the Martinii announces his presence

Oh, remember when I said there was more going on with that J.D. Martinez injury? Well, his knee tweak meant Houston could place him on the disabled list, let him heal for the next two weeks and get some at-bats in Oklahoma City.

It also mean that the Astros could reinstate Fernando Martinez from the DL. He seemed to have taken exception for missing time earlier in the season, because he hit a home run in his first at-bat of the season to give Houston an early 2-0 lead over Cleveland.

That didn't last, and F-Mart didn't even finish the game. But he played. For now, that's enough.

Rick Ankiel stars in the photo of the year

A picture can tell a thousand words, right? 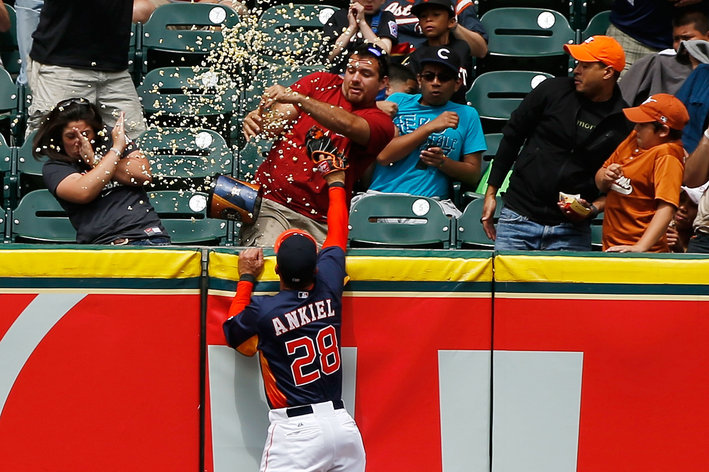 What is that picture over there on the right telling you right now?

Is it talking about the futility of existence? About how rooting for the Astros is a Sisyphian endeavor that involves players for said team stealing your popcorn?

Yeah, I didn't think it said any of those things. It is pretty darn awesome though. Give credit to the photographer for capturing a brilliant moment with all those kernels flying through the air.