Maybe this rivalry thing will work out.

After getting the first 26 batters in a row Yu Darvish failed to get the 27th batter out on Tuesday night. That 27th man happened to be Marwin Gonzalez who was not only batting ninth but also on the Astros 2012 roster because he was a Rule 5 selection, as well as the subject of this GIF:

Well tonight he entered baseball immortality as one of only 11 to break up a perfect game as the 27th man (h/t Hurtya). This lead to some Ranger fan fueled outrage on Wikipedia. Earlier tonight Marwin Gonzalez's Wikipedia page looked like this: 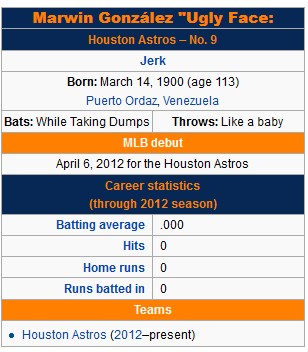 This is beautiful. Rangers fans - never go away! twitter.com/oneadame/statu…

This lead to a response by some Astros fan editors on Marwin's Wikipedia page:

The current iteration of the page does mention Marwin Gonzalez breaking up Yu Darvish's perfect game but no insults are to be found on the page from either side. The one thing that does remain on the page is a nickname for Gonzalez:

I like it and I think it's something that the other TCB writers will embrace.

The Astros may have ultimately lost the game 7-0 but it was a win for Astros fans and dare I say the building of a rivalry between the Astros and Rangers.

Updated: The game breaker line has been removed because apparently Muboshgu doesn't think Gonzalez's being one of only 11 people to breakup a perfect game as the 27th man being an "unbelievable" feat. Yes, Muboshqu what Gonzalez did was "unbelievable" or at the very least extremely rare.

Update (investigative reporter Timmy! checking in): We've discovered the Rangers fan who was upset by the Marwin Gonzalez hit:

He apparently attempted to make several very vulgar edits to Marwin Gonzalez's Wikipedia page. I won't repeat them here but you can go look at his edits here.