The inaugural TCB Astros Fan Favorite March Madness Tournament is in the books. Here are the final results, wrap-ups and I want your feedback for future events like this.

That's it voting is complete, and that means we have a winner:

Aaron West, who will be making his Lancaster Jethawks debut on Sunday April 7, 2013.

Both contestants had strong support in a vote total that exceeded 8000 votes. Unfortunately, for Asher Wojciechowski there was some issue with the voting and at one point he wasn't receiving any votes. Support didn't give me any indication of the issue as when they went to look at it the vote was working correctly. Therefore, I don't have enough to go on to overturn the final vote total and we're not in Florida so there will be no hanging chad counting.

The fact that both made it to the finals is a testament to the support and dedication they have behind them as players. As an Astros fan I'm excited to watch them develop in the minor leagues and make their debuts in the major leagues. 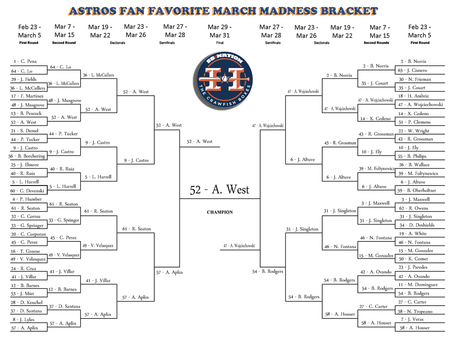 The bonus match-up between Jose Altuve and Jason Castro did not get to even a thousand votes yet it's pretty clear who the Astros fan favorite major league player is:

For those wishing to retrace the steps of the tournament here are all the wraps including the final two votes:

In the comments below: tell me what you guys liked what you didn't like; any ideas you might have for future tournaments; would you like to see this again next march or sooner; any other feedback you may have.