Under the Microscope: Bud Norris

Bud Norris pitched better in 2011 than he did in 2012. What changed to cause this? Pitch F/X identifies variation in pitch velocity, break, and release point that could be the root cause of his struggles.

Share All sharing options for: Under the Microscope: Bud Norris

Last Sunday was an evening of firsts for the Houston Astros. The Astros opened up the first game of the 2013 MLB on national television, hosting the Rangers for the first time ever to open a season, possibly the first game in what may become a new rivalry. This was the Astros' first game as members of the American League West, their first played against a new division opponent, and their first with new uniforms. Sunday was also RHP Bud Norris' first Opening Day start.

Norris' road to being named opening day starter was atypical. Most opening day starting pitchers are fan favorites, have long tenure with their club, or they are so effective that they are the best bullet that their club can fire. Norris really isn't any of those. The Astros' most effective starting pitcher last season was Lucas Harrell, and it was not a close contest. Norris has been with the Astros for but three and a quarter seasons, so he doesn't have long-term tenure (though this is probably the closest reason to why he was tabbed for opening day duties), and his performance last season (7-13, 4.65 ERA) was anything but impressive. In fact, one could argue that Norris' 2012 was a huge step back from 2011 (6-11, 3.77 ERA), and a cause for concern.

I don't care who pitches on opening day, but what exactly did happen to Norris to cause him to backslide in 2012?

This is not a discussion of what Bud Norris should have accomplished based on his statistics. Instead, I'll focus on what actually happened.

Norris' ERA does not tell the whole story, as usual. His 2011 ERA was much lower than 2012, but in 2011 he gave up a much higher number of UN-earned runs. In the baseball world, those runs don't count against him, but Norris still had to pitch after an error was made, and his effectiveness at doing so definitely counts when trying to figure out the differences between those two seasons.

Norris 2011 doesn't look quite as wonderful when figuring in runs he allowed that did not count towards his personal ERA but still resulted in a negative impact on winning games. But RA/9 corroborates ERA in one sense: Norris backslid in 2012 (for you stats guys, this is reflected in his FIP as well, but I'm trying to use fewer raw numbers in my posts).

The first place to look when explaining variations in performance is at a player's BABIP, a measurement that can indicate if team defense or bad luck played a part in that player's season. In Norris' case, we can put that to rest; His BABIP did not change between 2011 and 2012, and neither did some of the other stats that can be depended on to evaluate pitcher performance (Strikeout rate, home runs allowed rate, walk rate, line drive rate, ground ball rate, etc.). This actually bodes well for his consistency going forward, but still - something changed in 2012 that caused an increase in the number of runs he allowed. I cracked open my Pitch F/X database to find out what that was.

What is the point in throwing an off-speed or breaking pitch if it is similar to one's fastball? The whole purpose of such pitches is to keep the hitter off-balance and have them swing at pitches that do not behave as they expect. Looking at Norris' pitch velocities shows a disturbing trend - his fastball and slider got slower in 2012 and his change-up got faster. (chart speeds in mph)

There's been some research proving that one of the keys to a change-up's effectiveness is the difference between the fastball velocity and the change-up velocity. In 2012, Norris gained 2 mph on his change-up while losing 1 mph on his fastball, for a net loss of 3 mph. Theory tells us that his change-up would be therefore less effective. Pitch F/X agrees.

So, in 2012, players swung at fewer of Norris' change-ups, took a higher percentage of them for balls, and generated a much higher percentage of plays that could be considered negative for the Astros (runner on base or runs scored). The only oddity is that batters also whiffed on a higher number of Norris' change-ups. I've chosen to focus on change-ups because of all Norris' pitch types, this is the only one that showed a significant increase in number of negative outcomes yielded. However, the cause of the decrease in change-up effectiveness might also prevent his other pitch types from improving and explain their drops in velocity.

As I showed above, Norris generated a higher number of whiffs on his change-up despite an overall large decrease in the effectiveness of that pitch. Pitch F/X gives a possible explanation in that the change-up is needing shorter distance to complete its break. The angle and drop of Norris' change-up is unchanged between 2011 and 2012. However, in 2012 the pitch began breaking more than a foot closer to the batter. A picture is worth a thousand words, or in my case a zillion, so here's a cartoon:

The later break coupled with a faster velocity results in a higher percentage of whiffs, but it probably also explains the increased number of balls and lower swing rate as well. A change in break that a pitcher is not accustomed to could have large impact on that pitcher's control of the pitch. So far, it looks like Norris is just plain throwing his change-up harder than he used to, which is doing funky things to its break.

One possible explanation for the variation in Norris' Change-up speed and break is that his release point has moved between 2011 and 2012. Pitch F/X shows that Norris' fastball and slider release point has changed approximately 2.5 inches, but that his Change-up release point has moved by 3.4 inches (larger than the diameter of the ball!). Most of that difference is in the vertical direction - he is releasing the ball higher than he used to, which allows it to be thrown on more of a downward plane. This could increase the speed and shorten the break.

Such a drastic difference between pitch release points in two separate years leads to a couple of questions. First, and perhaps most relevant, were the Pitch F/X cameras suddenly re-calibrated at some point at the end of 2011 or beginning of 2012? If no, then was the change in release point due to something mechanical that happened suddenly, like an intentional change in grip or mound position or an injury?

Looking at a trend line of Norris' release points over time can clear some things up. From the charts below, it does not appear that there was a drastic change at any point that could be explained by a sudden event. 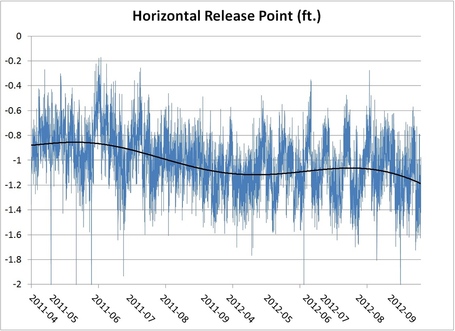 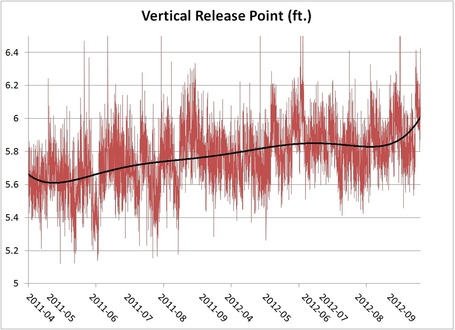 The sixth-order polynomial trend lines of the X-and Z- components of Norris' release points shows that during the course of both seasons, his release point very gradually moved (from the catcher's point of view) left and up.

Now, the best way to anger a statistician is to tell them that correlation implies causation, and so one can't conclude necessarily that Norris' change in release points is what resulted in worsened on-field results. HOW-EV-AH, if one plots Norris' actual results by month, his ERA and FIP both worsen at a more-or-less steady rate. There is no drastic leap in either stat over time either. Check it out: 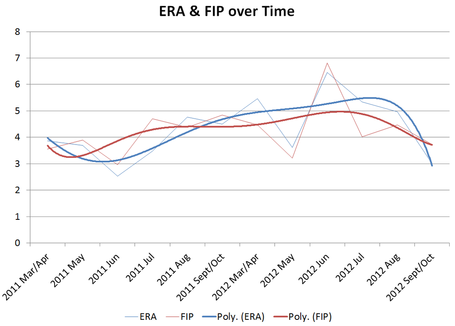 Without looking at tons of video or having inside information about possible injuries, it is impossible to tell if Norris' change in pitch release is due to a mutating delivery, muscle fatigue, lack of focus, or a sudden decrease of gravitational force on his pitching arm. But it is possible, through the magic of Pitch F/X, to identify what has changed so that it can perhaps be addressed.

It's a stretch to say that pitch release is the definite root cause of Norris' struggles, but it seems likely that the change in release point over time has contributed to some of the other observable phenomena - drop in fastball and slider velocity, increase in change-up velocity and sharpness of break, and that these things might be causing his worsening results.

We will have to watch Norris during 2013 to see if these trends and results continue or if they are corrected. We will be able to quickly observe if Norris regains his former pitch velocities, and Pitch F/X can tell us in the future whether his release point has become consistent, returned to it's former location, or has continued to change.

What do y'all think? Have you noticed any other changes in Norris or his pitches that could help explain his declined performance in 2012?

Here is a link from Beyond the Box Score with Pitch F/X information from Norris' Opening Day start. One game is an incredibly useless small sample size, but still. From other Pitch F/X sources, I noted that his Fastball velocity is still down and his Change-Up velocity is still up. Clack suggests, and I agree, that perhaps Norris should eschew the change-up altogether, as it does not seem to be doing him much good, though I am leery of 2-pitch starters. But really - Norris' slider is extremely effective, so perhaps he is a guy who would benefit by simplifying his repertoire.