Some things to talk about while we send out thoughts and prayers to the town of West...

Brian T. Smith has a note today about Carlos Pena's rebound on the most recent road trip.

The 34-year-old first baseman/designated hitter is 10-for-29 with four doubles, six walks and six RBIs in his last eight games.

To Astros manager Bo Porter, the sight of Pena’s opposite-field power shots was one of the most encouraging signs during the club’s disappointing Pacific time zone journey.

"Carlos is definitely getting locked in, and that’s good, because we’re going to need him in the middle of that lineup," Porter said.

Those 29 at-bats have been impressive, but Pena has a .333 batting average on balls in play right now, which leads to his .250 batting average. Do I need to tell you those are unsustainable numbers? Pena hasn't hit .250 or better since 2007 and has a career .277 BABiP. So, you know, regression.

Still, we have seen an increase in his isolated power average so far, even as his walk rate remains below his career rates. Pena has also been very solid defensively, as advertised, and has been worth 1 Fielding Run so far this season.

Basically, Pena has been exactly what Houston should have expected when the Astros signed him.

Smith is chock full of good info today, also noting that Houston is not likely to call up any of the hitters in Oklahoma City who are actually hitting right now. He name-checks Jake Elmore, Brandon Laird and (sad-face) Robbie Grossman, saying there are no plans to bring any of them up.

Rarely have I been as wrong as this item was 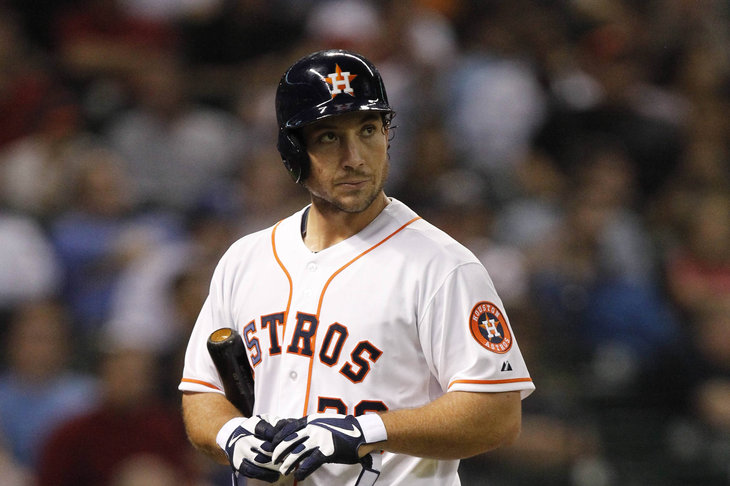 Turns out roster moves DID happen today, as Brett Wallace was sent down and Brandon Laird was called up. Just disregard everything you read here.

He also says that Fernando Martinez will be re-evaluated on Thursday in an effort to be taken off the disabled list. That means some kind of roster move may be imminent, possibly as soon as Friday's first game against Cleveland. We've gone over a lot of the possibilities, but it appears that the other shoe may drop soon.

I'm sort of glad Houston isn't planning on being reactive to the offense just yet. Give it a few more weeks and if guys like Brett Wallace aren't hitting, then maybe it makes sense to bring Brandon Laird up to the majors.

Project Prospect looks at the top rookies in 2013 so far, and one of Houston's young'ins lands on the list. Who?

None other than Brad Peacock:

After Peacock put together a few dominant seasons in the minor leagues, his star has faded quite a bit. He is essentially a two-pitch pitcher who depends on command, something that has eluded him at times in the past. His fastball sits around 91 MPH and has little movement, so he has to locate it well in order to be effective. His curveball, an above-average pitch, is what has always excited evaluators and allowed him to rack up strikeouts at all levels of the minor leagues. The pitch has big, sharp break, and he can steal a strike with it or use it to put a batter away. He has a changeup that he throws with little frequency, but that’s going to have to change in order for him to have any hope of developing into anything more than a No. 4 starter.

Characterizing Peacock as throwing the change with little frequency is a bit of a misnomer. Peacock has thrown the change about 10 percent of the time this season. That's half as much as the curve, but 10 percent is not infrequent.

So far, the change has been his best pitch, too, by linear weights. The same size is very, very small, of course, and his fastball (his most frequent pitch) hasn't been very good.

Given all that, I wonder if Peacock stays on this list once someone like Tony Cingrani establishes himself in the majors.