A look at the most interesting match-ups from round one and the ones to come in round two of TCB's Astros Fan Favorite March Madness Tournament.

Share All sharing options for: TCB Astros Fan Favorite March Madness Tournament Round 1 Wrap-up And A Look Ahead At Round 2

The opening round of the TCB Astros Fan Favorite March Madness Tournament has been completed. Thursday, March 7, we will move into round two.

Here's the latest bracket for viewing: 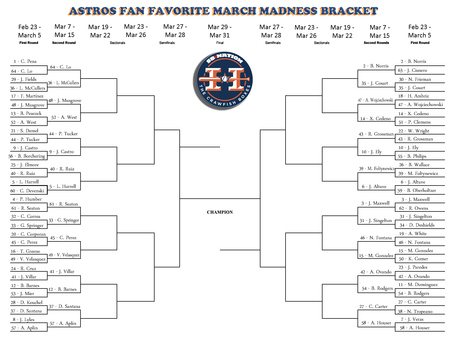 These are the match-ups that went right down to the wire.

The "hey that's not cool" match-ups:

These are the match-ups that people were the most torn on and it's not surprising that the match-ups contain four of the Astros Top five prospects.

33 George Springer over 32 Carlos Correa: Spring actually beat Correa pretty handily with a final vote total of 97-71 but that didn't stop people from being angry that they faced off in the first round.

Both Brady Rodgers and Andrew Aplin were well behind Matt Dominguez and Jordan Lyles when Rodgers discovered the tournament and shortly there after took to Twitter to rally for support. As a result Rodgers vs Lyles and Aplin vs Lyles had the most participating voters in the tournament so far. Aaron West was another social media savvy prospect to take to Twitter to get support for his match-up with Brad Peacock. Asher Wojciechowski also got support from a family member and easily defeated Hector Ambriz.

It will be interesting to see how far they advance with the support of social media. Coincidentally, all four are in different brackets so all four could conceivable make the final four with the help of Twitter and Facebook.

Most interesting round two match-ups

5 - Lucas Harrell vs 40 - Rio Ruiz: I would put my money on Harrell but I could see a Ruiz upset with the prospect lean in voting so far.

3 - Justin Maxwell vs 31 - Jonathan Singleton: I think Singleton will ultimately take this one but it'll be close.