This is it: Asher Wojciechowski vs. Aaron West; A.W. vs. A.W.; Wojo vs. West; trade acquisition vs. draftee; tough spelling vs. easy spelling; however, you want to look at this match-up do it.

Wojciechowksi defeated Brady Rodgers in a back and forth tidy 1000 vote contest that resulted in a 536-464 Wojo win.

West defeated destroy Andrew Aplin in a crazy 1991 vote contest that resulted in a 1236-755 West win.

For more details on the tournament, click here for the introductory post or check out the round wrap-ups from each round below: 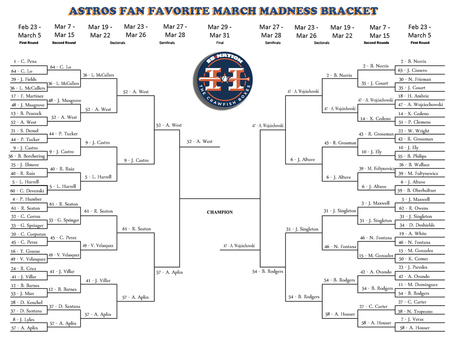 Lets get it on

The rules are simple: Determine which player you think should advance to the next round by voting for that player. Arguments made for an advancing player in the comments section below may be used in that player's description for the next round. Vote subjectively, objectively or by using your trusty magic eight ball. Voting will end Sunday March 31, 2013, at 6:30 p.m. CT.

Wojo was one of the 15,000 pitchers involved in that trade with Toronto last season. After being drafted out of The Citadel, Wojo had a disappointing first full season in the pros. But, he bounced back in 2012 and was stellar for Corpus in eight starts after the trade. Wojo threw 137 innings overall last season and 43 for Corpus with a 2.06 ERA with the Hooks and 34 strikeouts to go with 14 walks. He's a big-framed guy who should be an innings eater at the big league level and could get there within two seasons. -David

Drafted in the 17th round in the 2012 MLB draft, Aaron West quickly made any team in the New York Pennsylvannia League pay for not drafting him sooner than the Astros did. In 61.2 innings West posted a 2.04 ERA with 8.6 strikeouts per nine (SO/9) and 1.3 walks per nine (BB/9). If West continues to develop and put up outstanding numbers like these he could be the steal of the 2012 draft.