It's been a long strange trip this bracket. We've had upsets galore and that's not necessarily a bad thing. Both major league players were knocked out which is a little disappointing but gives me an opportunity to do a bonus match-up. On Saturday Jason Castro and Jose Altuve will faceoff as the two major league players who went the furthest in the draft. The vote will begin Saturday morning and end during the podcast so tune in to find out who the winner is. Speaking of the podcast, we will not be starting at our normal time due to the Astros and Rangers kicking off at that time. We will instead start the podcast an hour early at 6:05 p.m. CT and go right up to the game.

Here is the latest bracket: 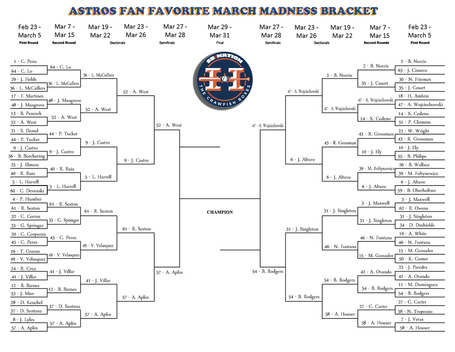 Round 4 Wrap-up and Look Ahead

Asher Wojciechowski took down Astros All-Star second basemen Jose Altuve with a 126-102 vote total. Wojo has had one of the hardest paths to the Final Four, matching up with major league players only. His first minor league match-up will be Brady Rodgers who powered his way to a 163-82 win over Astros first base prospect Jonathan Singleton.

Andrew Aplin collected 255 votes which is easily the highest vote total of the entire tournament. As one commenter pointed out, Aplin doesn't even have a Twitter or Facebook page to speak of which makes his spot in the Final Four even more impressive. Ross Seaton still had a strong showing with a 115 votes, unfortunately, his Cinderella narrative ends here. Aplin now faces Aaron West who dismantled Jason Castro's run with a 172-91 victory.