Round three of the TCB Astros Fan Favorite March Madness Tournament is complete, it's time to look ahead to round four.

Share All sharing options for: TCB Astros Fan Favorite March Madness Tournament Round 3 Wrap-up And A look Ahead At Round 4

This round had probably the least amount of interesting match-ups. Everyone that advanced did so pretty handily. The most interesting advance was probably Ross Seaton again defying the odds and beating an Astros prospect that's ranked higher than him in Vincent Velasquez. He will be facing the social media backed Andrew Aplin so I expect his toughest challenge yet.

Speaking of social media I know it's been frustrating for some voters to watch their choice get out voted because some participants have the power of the internet but I want to point out that voters have the power of the internet too. Voters are more than welcome to get their friends and family involved in the voting. Heck, maybe you can turn Grandma or your niece into an Astros fan. Either way the next few rounds are going to be tough for the social media back players. We're down to the final eight and Jason Castro (having a monster Spring), Jose Altuve (metric system named after him) and Jonathan Singleton (number one prospect) are still alive, which was not exactly unexpected to begin with.

Here is the latest bracket: 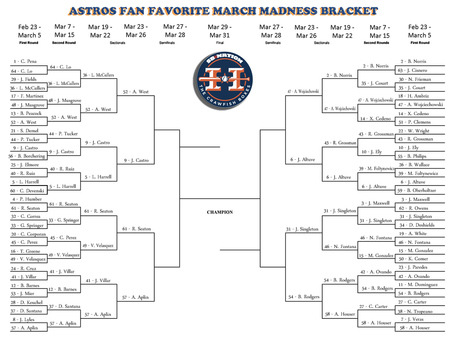 Bud Norris took a healthy early lead but eventually succumbed to the powerhouse that is Asher Wojciechowski. At a 96-75 vote it was the closest match-up of the round. His next opponent is going to be his toughest challenge yet.

Battle of the Pitching Prospects

Can't say that I'm surprised that Aaron West defeated Lance McCullers who everyone has rated ahead of him on prospect rankings. West is following the tournament and promoting his cause when he can; McCullers on the other hand probably hates TCB because of Brooks (Sorry Brooks but you're tied to him like David is tied to Austin Wates).

Now we're getting into the nitty-gritty:

As I mentioned in the introductory posts three of the four match-ups include fan favorites Jose Altuve, Jason Castro and Jonathan Singleton.

Does Aaron West have enough social media backing to over take Jason Castro and the outstanding Spring Training he's been having?

Can Brady Rodgers take out Jonathan Singleton who is the Astros number one rated prospect?

Starting Saturday, March 23, it's time to find out.