Round two is complete, next week round three starts and it's pretty clear that social media and Houston ties have begun to dominate the tournament.

Share All sharing options for: TCB Astros Fan Favorite March Madness Tournament Round 2 Wrap-up and A Look Ahead To Round 3

Round two of the TCB Astros Fan Favorite March Madness Tournament has been completed. There was only one good match-up in round two but there were also a couple upsets and one match-up that was a lot closer than I expected. We'll get to that below but first I want to adjust a couple dates, the schedule has the next round starting on the March 19, I will be moving that up a day to March 18 so Monday we will start the next round of voting. This only affects next round and I wanted to adjust it so I had a day in between rounds to do another one of these posts wrap-up posts. 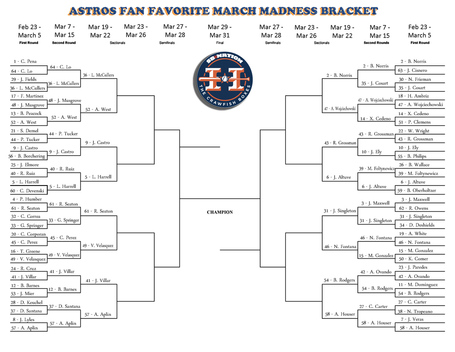 There was only one close match-up and that was the one that wrapped up today between 45 Carlos Perez and 49 Vincent Velasquez. Velasquez defeated Perez 49-43.

The biggest upset of the round came in the 33 George Springer vs 61 Ross Seaton match-up which I thought was going to be an easy win for Springer. I underestimated the hometown angle for Seaton who played his high school at Second Baptist School in Houston Texas and defeated Springer with a 131-99 final vote. I don't think he necessarily has a strong social media presence but he does have a Houston presence and this is a Houston based site so there is that.

Other upset I wasn't expecting:

I don't know if it's because 27 Chris Carter is new to the team or what but he lost pretty handily to 58 Adrian Houser 94-71. I'll be interested to see if Houser has joined the social media backed players or if people really liked him better than Carter.

Closer than I thought match-up:

36 Lance McCullers defeats 64 Chia-Jen Lo but it wasn't exactly an easy win for McCullers. The final vote total for the match-up was 98-70 in McCullers favor.

54 Brad Rodgers, 57 Andrew Aplin, 47 Asher Wojciechowski and 52 Aaron West all advanced to the sweet sixteen. Aplin had the toughest time beating out Domingo Santana with a final vote total of 179-95. West and Wojciechowski face the toughest challenges going forward as they face 36 Lance McCullers and 2 Bud Norris respectively.

Four major league players remain in the tournament. Unfortunately, two of them will be facing off in the next round. 5 Lucas Harrell will face-off against battery mate 9 Jason Castros. I think Castro ultimately takes the match-up.