A brief snapshot on new divisional opponent, the Seattle Mariners.

The Mariners have struggled to capture the national attention since Ken Griffey Jr. took his talents to Cincinnati. History repeated itself this past season as Ichiro found his way to the Bronx. Seattle is a view into the future for an Astros fan, a middle of the road team that has hit on a few prospects. The key difference is Seattle is spinning its wheels somewhat. Even when they attempt to dig themselves out of their hole by trading for Justin Upton, Upton vetoes the trade. That's the life of a Mariners fan. Fear not M's fans, you will have company in the basement this year.

Bad news, the 2012 Mariners finished last in the AL West for the forth-straight year. Good news Seattle! Houston is coming town. 2013 would truly be a disappointment if history repeats for a fifth time with the Astros joining the division this year.

The addition of the Astros to the AL West isn't the only change affect the M's. The pitchers paradise that is Safeco Field is getting a makeover. The fences are coming and lowering in left and center field, as much as 17 feet closer at one point. The actual wall height will be a uniform 8 feet along the entire outfield wall. The goal for the changes is to improve the offensive output of the stadium, which saw two perfect games and a no-hitter in a single season. 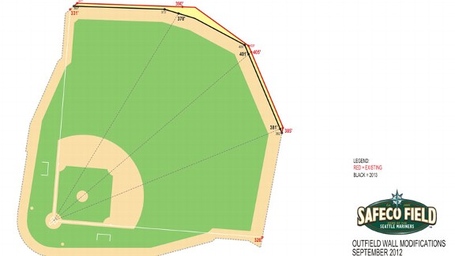 The Mariners, even with the improved lineup, will hang their hat on pitching and defense. It's easy to see why when Felix Hernandez take the bump every fifth day. One point of concern, Hernandez has pitched 954 innings over the past three seasons - the most of any pitcher during that time period. Is it a testament to his youth or a sign of fatigue to come?

Familiar faces return to the rotation, Iwakuma, Beavan, and Ramirez, who helped put up the forth-best team era in the American League. Joe Saunders, the winner of the first MLB wild-card one game playoff, should slip in nicely for Jason Vargas.

Tom Wilhelmsen returns as the closer, coming off a season where he racked up 29 saves. The bullpen held batters to .230 last season, Carter Capps and Charlie Furbush will be the bride to Wilhelmsen.

The Mariners lineup has gone through a facelift as the result of players being nudged out of Los Angles and Washington. Michael Morse and Kendrys Morales bring the power that is desperately needed in Safeco Field. These additions fail to improve upon Seattle's major offensive problem of getting on base. The Mariners had a worse batting average, on-base average, and slugging percentage then the Astros.

The Mariners have tones of promise and quality prospects ready to make the jump to the majors. Until then current players, Justin Smoak and Dustin Ackley will need to improve upon their 2012 campaign to prevent being passed by as busts. In a perfect world, Seattle makes a Oakland-like run at playoff spot but in reality they're goal to keep ahead of the Astros and out of last place.