Matt Dominguez figures to be a large part of the Astros' present and future plans at 3B, bringing excellent defense and a steadily improving bat to the majors at an age where most players are still in Double-A.

On July 4, 2012, the Astros celebrated Independence Day by freeing themselves from arguably* the worst contract ever awarded by the franchise. The Astros' equivalent of the Declaration of Independence reads like this:

The Marlins have acquired Carlos Lee from the Astros for Matt Dominguez and Rob Rasmussen, the teams announced. [Ben Nicholson-Smith, MLB Trade Rumors]

*I say arguably because even though the Lee deal was for $100 million and hampered the club's ability to make other moves for five seasons, there's a pretty good case to be made that the $4.5 million paid to Pedro Feliz and $12.5 million to Woody Williams were actually more offensive.

While most national writers did not begin slamming the Marlins until they had made their latest headline-busting money grab in November, Astros fans already knew that Miami's front office was mentally unhinged when it gave up two legitimate prospects to acquire El Caballo from Houston.

From the Astros' perspective, the prize in the trade was Dominguez, a first-round pick who had featured twice on Baseball America's Top 100 list (2009 and 2011), known for elite-level defense and a bat that could at least play as MLB-average.

Dominguez made his MLB debut in 2011, but did not see extended playing time until after his trade to Houston in 2012. In 31 games, Dominguez continued a trend that he had shown throughout his minor league career - namely, he rarely walked, he rarely struck out, he maintained a decent contact rate, and he played defense at a well-above average level. The only surprise was that he managed to knock five home runs in such a short period, and in his first extended exposure to major league pitching, which led to a .192 ISO (well above any season since A-ball in 2008). MLB Hit Tracker shows that all of these homers were pull shots to left field, and two would not be homers in most parks (average dist. = 366.4 ft.). However, Dominguez will play half of his games at Minute Maid, where the Crawford Boxes might enhance his power numbers relative to Away parks. 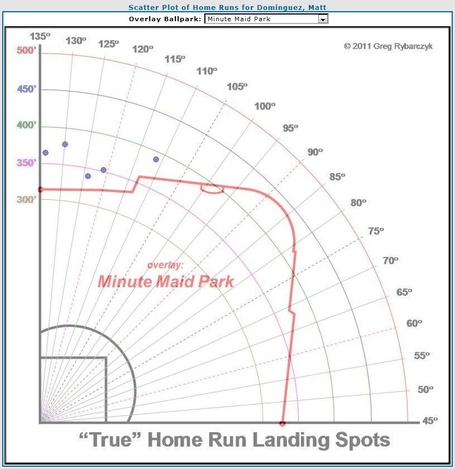 Defensively, Dominguez showed great range and smooth actions while playing third base. Even if his bat never catches up to provide plus value, his defensive prowess should keep him in baseball for a long time and give the Astros an asset at that position that only a few teams have.

Despite the graph above showing all of Dominguez' home runs coming on pull shots, Texas Leaguers' Pitch F/X database shows that Dominguez hits to all areas of the field; he is not necessarily a "pull hitter" that pitchers can exploit by throwing him pitches down and away. 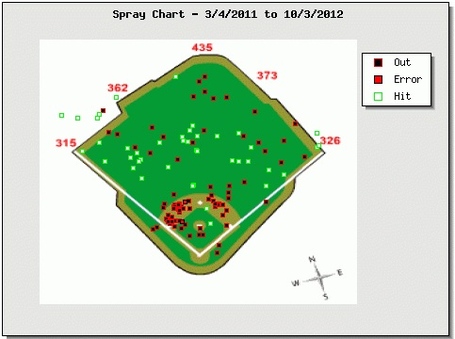 This is a good thing; although Dominguez does not at present have an impact bat, it does appear that he has few natural weaknesses that can be exploited by pitchers. As his body matures (he is only 23, which is younger than many players still in Double-A!), he should add a bit more power, which will increase his value further. Long-term, he seems likely to be a consistent .255 hitter with 15-ish home runs and stellar defense. One thing that Dominguez will not do is provide Stolen Bases, as he has swiped only one in his entire professional career and is rated below-average in base running by Fangraphs (Warning! Small sample!). This will likely limit him to hit low in the Astros' lineup, even if his bat improves.

In 2013, most predictors estimate that in over 500 plate appearances, Dominguez will hit around .245 / .297 / .392 with 15 homers, 55 runs scored, and 68 RBI. The Astros should be pleased with that kind of production out of their bottom lineup spots, especially if it comes with the kind of defense that Dominguez will surely provide.

While there is talk of Brett Wallace taking away some appearances at 3B in 2013, Dominguez looks to be the Astros' long-term answer at the position, at least until Rio Ruiz or Carlos Correa proves themselves in the minors and tries to claim the job. Dominguez will provide excellent defense with offensive production that could rate as above-average for a player hitting out of the eighth or ninth lineup spots. At only 23 years old, the Astros figure to give Dominguez, a former top prospect, plenty of opportunity to grow into an asset over the long-term. And all it cost them was half a season of Carlos Lee.