That's right TCBers, we've got 64 players ready to duke it out in a Spring Training March Madness showdown decided by you.

Welcome to the Astros tournament to end all Astros tournaments. With college basketball getting ready to kick off their march madness we at TCB came up with the idea of hosting our own tournament that will take us through the Spring Training season.

During Spring Training TCB will be hosting a 64 player March Madness tournament to determine which Astro is the communities favorite player. For the next five weeks we will have 63 match-ups in six rounds of votes. The winner of each match-up leading up to the final will be determined by the player who gets the most votes in a 24-hour public poll. The winner advances; the loser exits the tournament. The final vote will last three days and lead us into the regular season. 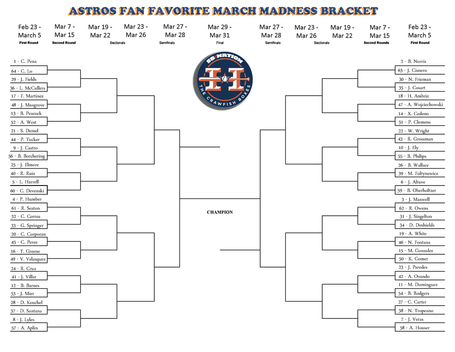 Each match-up will feature a short description of the player, highlighting some of the positive things he's done in his professional career. A poll will be available for 24-hours to vote on your favorite player or the player who you think should advance to the next round. The winner will be the player who receives the most votes.

Methodology for Players and Rankings

Initially, we had Jed Lowrie and Fernando Rodriguez on the list but they were replaced by Chris Carter and Brad Peacock. Max Stassi did not make the tournament because he wasn't ranked by us.

The finals will be March 29 - March 31, this vote will last three days with the winner being announced Monday April 1, 2013.

As with any bracket challenge the image above is downloadable by right clicking and selecting save image. You are more than welcome to download it and fill it out and turn it in before Saturday to SBN.crawfishboxes@gmail.com. I don't have anything to give away, maybe next year, but I will announce your awesomeness in a future podcast or post.