Astros offseason: How the pieces fit so far

Putting the puzzle together.

Share All sharing options for: Astros offseason: How the pieces fit so far

I'm sure you've already read about the trade for Dexter Fowler and the signings of Scott Feldman and Chad Qualls, so I won't delve into the details too much. No, I'm here to help the fan base gather its collective breath after the recent windfall of activity. Let's take a step back, put aside our differences on the pros and cons of the moves, and look at what we're working with for the upcoming season.

The Astros opened 2013 with Chris Carter, Justin Maxell and Brandon Barnes manning the seven, eight and nine spots in the order, respectively. The team will more than likely open 2014 with Robbie Grossman, Fowler and LJ Hoes patrolling the outfield until George Springer makes like The Kraken and is released unto the world. No matter what your opinion is of the Fowler trade, you have to admit this year's outfield trio is better in every aspect of the game.

Fowler is a solid MLB player, picking up 10.2 rWAR in 5 full seasons. At 27 years old, he's on the right side of the age curve to help the Astros long-term if they would like to keep him. Plus - and this is something I think gets overlooked - it removes Carter from the outfield, hopefully forever. Baseball-Reference had Carter at minus-four runs saved in the outfield last year. Keeping him off the grass is addition by subtraction. 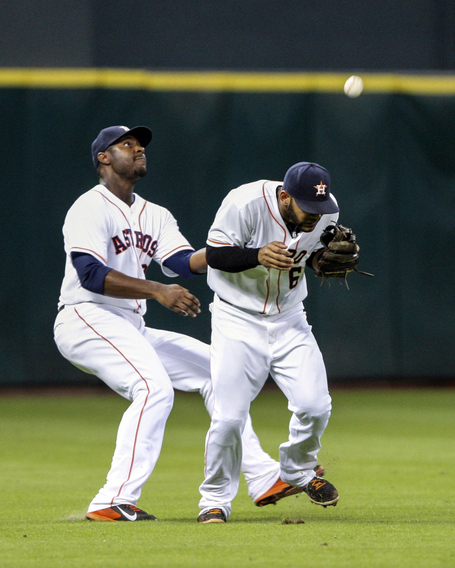 At the very worst, Houston will have three solid defenders with on base ability holding down the fort until Springer is called up.

With the outfield and infield (beside maybe first base) set, the Astros wisely turned their attention to pitching. There are a bunch of young guns that need time to mature - or be weeded out - but a major league rotation needs stability. Enter Scott Feldman.

If the Astros get the 2013 version of Feldman for the entirety of his contract, I think you have to call that a success. Pitchers like Jarred Cosart, Brett Oberholtzer and Brad Peacock are going to have flashes of brilliance but also starts that don't make it past the fifth inning. That's when Feldman's six innings and three runs allowed become so important. Bo Porter more or less knows what he's going to get every fifth day and (cliché alert) Feldman can set the veteran example for the young guys.

The same can also be said Chad Qualls. The Astros bullpen last year was the most carousel-like part of a constantly changing team. This season, barring injury or implosion, Qualls will be there every day. Consistency is very important to a young team, and with at least 52 innings pitched every year since his rookie season, Qualls is nothing if not consistent.

It wasn't flashy, but the Astros added three professional baseball players who will help the major league team become more competitive. After losing 111 games, that's a good place to start.