It's Astros week over at FanGraphs. A few days after Marc Hulet touched off a TCB firestorm with his organizational prospect rankings, the inimitable Carson Cistulli has taken a look at the Steamer projections for fourteen of the top fifteen guys in the system (Andrew Thurman was, for some reason, omitted.)

For those who don't know, Steamer is a projection system created by three men - Jared Cross, Dash Davidson, and Peter Rosenbloom. It bears reminding that this is simply a projection of how these players would do in 2014 if they were promoted to the major league level. Accordingly, players who are farther away from the majors - like lightning-rod prospect Josh Hader - don't fare as well as their more-polished counterparts in the upper minors.

Following Mr. Cistulli's lead, let's switch to another projection system: Oliver. Oliver automatically prorates hitters to 600 PAs, making life easier on those of us who are not as smart as some others.

Looking at TCB's top thirty Astros prospects, this is what we come up with:

Let's get a bit of housekeeping done first. I am not much of a stathead. I really have no business doing what I'm about to do, because I don't understand how these projection systems work. In Cistulli's article, he mentions that a lot of the defensive ratings were simply the positional adjustments. I don't know where the Oliver system pulls their defensive numbers from - why does Tyler Heineman get a 17.6 Def, while Carlos Perez gets a 14.2 and Max Stassi gets a 12.4? I don't know. Stassi's defense is well-regarded, but he comes out on the low end of the three, whereas Heineman comes out smelling like roses. This may be due to Heineman's superior CS% (42% versus 37% in 2013). I don't know. But it does mean that we should probably take these projections with copious amounts of salt.

The # column indicates the player's ranking on TCB's top thirty list. I've added two personal favorites - Jason Martin and Joe Sclafani - to see where they'd fit, had they been included.

Still, as a whimsical exercise, I think there's still value here. The numbers (players listed in descending order of WAR): 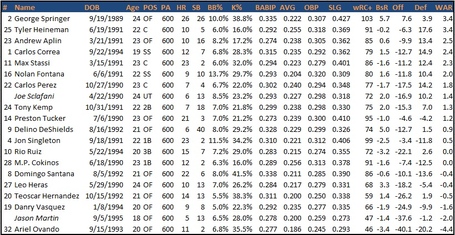 It's shocking to see Heineman at the top - tied with George Springer, no less - but notice that all of his value comes from behind the plate, where we should be most skeptical. Still, after both hitting a pair of inside-the-park home runs, maybe we're beginning to learn that they're actually long-lost twins?

Also of note is how much Oliver likes Carlos Correa. 2.4 fWAR for a 19-year-old shortstop is great... but again, look at the numbers and you see that most of his value is on defense. This isn't a bad thing, necessarily. After all, almost every player on this list comes down in the negative for offense. Only Springer has a wRC+ over 100, though Heineman, Preston Tucker, Jon Singleton, and M.P. Cokinos post better than 90.

Of the 18 pitchers on this list (Austin Nicely didn't receive an Oliver projection), eleven are replacement-level or better. 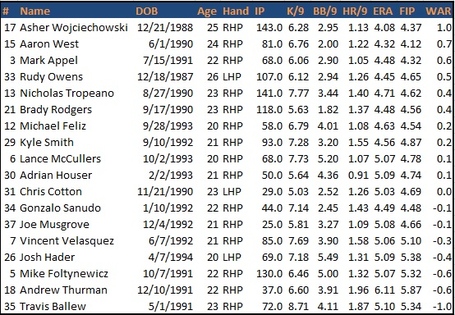 I would take all of this with a lot of salt. I don't know Oliver's methodology, but I do know that I highly doubt that Andrew Aplin could start as a big leaguer right now and throw 2.5 fWAR on the board. As fun an exercise as it is, ultimately I would encourage readers not to put too much stock into it.