Winter Meetings 2013: Some thoughts on the explosion of Astros rumors

With the explosion of rumors surrounding Houston's free agent targets, is it fair to wonder whether their strategy for adding players has shifted?

Share All sharing options for: Winter Meetings 2013: Some thoughts on the explosion of Astros rumors

A slow winter suddenly exploded with rumors, signings and trades last week. We expected things to pick up after the Winter Meetings kicked off, but who could have figured most of the Astros heavy lifting would be done before the Orlando conference even kicked off?

That's sort of what happened, as Houston fixed its outfield hole by trading for Dexter Fowler from the Rockies, added to its rotation by signing Scott Feldman and started helping the bullpen by signing Chad Qualls. The team still has holes, but its in a much better situation now than it was two weeks ago.

Flash-forward to this week. On Tuesday, the Astros got linked to at least six different free agents we hadn't heard them involved with before. They include first base types like Michael Morse, Grady Sizemore and Corey Hart and pitchers like Chad Gaudin, Joba Chamberlain and Jesse Crain. Tim has a nice rundown of all the rumors here, in case you want a more detailed list.

Why the explosion of rumors? Why now?

Here's a theory: In the beginning, Houston was targeting specific players. Luhnow admitted they'd been talking to Colorado about a Fowler trade since the season ended. I'm sure they had Feldman targeted similarly and obviously thought Qualls was a value after he tweaked his delivery. 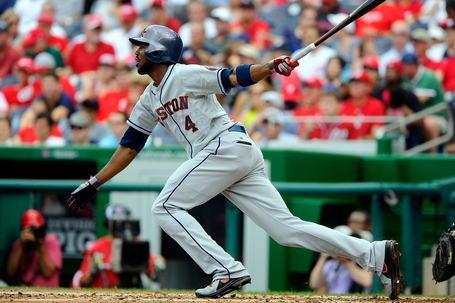 Now, though, the Astros have fewer holes and are going after tiers of players instead of specific guys. They've got a set amount of money and are saying, "This is what we're offering. We'd love for you to play for us, but if you want more money, you'll have to get it somewhere else."

That's why they're linked to Morse, but also to Hart and Sizemore. If Morse wants $7-8 million on a one-year deal, Houston says no and moves on. They can get similar production with similar risk from Corey Hart, but for less money. Ditto Sizemore, who could provide production but wouldn't cost a ton of money to sign, thus lessening risk.

With the bullpen, it's the same thing. Is there any difference for them between Gaudin, Jose Veras and Jesse Crain? Besides where they fit on the risk/cost scale, not really. Gaudin will be safe, but also more expensive. Veras would like to return to Houston, but money seems to be slowing those talks. Crain would also like to be in Houston, but carries significant injury risk, which means his contract would need to be small.

That's fine and explains why so many players are linked to Houston. But why are we hearing about it now?

That's much simpler to answer. It's all because of how the Winter Meetings play out. Houston keeps its negotiations close to the vest. We know this. We've seen this for the past two years. It's not news.

But, it is surprising to see so many comments and rumors about their suspected targets. To me, this means that they're getting gamed by the Winter Meeting system. Heck, it's not just the Winter Meetings, it's the baseball agent system. I'm pretty certain it's the player agents leaking Astros interest rather than the team itself. Why would they do that?

Let's take a scenario like the Scott Feldman signing. A day before Houston announces his deal, Feldman makes news with a report that he wants a three-year, $30 million deal to talk to teams. What if Houston gave him that deal, said it was their last offer, and Feldman's agent then floats that number to his media contacts to see if it stirs up any interest out there. Like a last-minute test balloon.

Same way with the Morse interest. Maybe Houston offered Morse a one-year, incentive-laden deal for $2.5 million. His agent then tries to negotiate through the media by saying that he wants $7-8 million. Houston moves on to other options.

It's all about playing the game at this point. Houston does a great job keeping things on the DL, but the Winter Meetings aren't about the down-low. It's about a player's agent making the Walk of Shame out of a team's executive suite at 2 a.m. and getting spotted by a media member.

Or something like that. I'm a little hazy on what actually happens in those magical hotels during this week.

Last point I wanted to touch upon. Some have brought up the (justified) criticism of the Luhnow front office in not getting deals done for Doug Fister or Brett Anderson when the packages for both were so light.

With the Anderson deal, it's about choices. Luhnow probably chose to add Dexter Fowler instead of adding Brett Anderson.

Both deals could have involved Houston, but didn't for different reasons. With Fister, the reason could simply be that the Nationals locked in on him early in the offseason and worked with Detroit to get a deal done. Is there any rule that Detroit has to call around and make sure no one else could offer them a better deal? Should Luhnow be cold-calling every GM in the league and asking about every one of their star players?

Nope, that would be a waste of a good man's time. If the deal never got outside those two teams, if Detroit wasn't shopping Fister outside of the Nats' interest, then it explains why the deal happened so suddenly and felt so light.

With the Anderson deal, it's about choices. Luhnow probably chose to add Dexter Fowler instead of adding Brett Anderson. Would a package of Jordan Lyles and Asher Wojciechowski have gotten a deal done for Anderson? Absolutely. But, the Astros would not have been able to land that outfield bat they so desperately need.

As attractive as good pitching is, I'll take a good position player every day of the week.

I'll also take the security of knowing that Fowler will likely be on the field for at least 120 games next season, impacting them on defense and at the plate. What if Anderson has injury issues again? Would you be happy giving up Lyles for 10 starts from Anderson?

Maybe the Astros could have gotten Anderson for Asher and Cosart or someone like that. But, after losing Lyles, could Houston really dip into its pitching depth again? I'm not so sure they'd want to.

So, the decision to go after Anderson or not probably got made when Houston pulled the trigger on the Fowler deal. If that's the case, I'm glad it went the way it did.