What's In A Name?: When Minor League Teams Re-Brand

With talk of the Astros moving their Triple-A affiliate to The Woodlands, let's stop to consider other recent minor league moves, including the re-branding of the Akron team and the move of San Diego's PCL affiliate to El Paso.

Share All sharing options for: What's In A Name?: When Minor League Teams Re-Brand

2014 will see some changes in the minor leagues. For starters, the San Diego Padres have moved their Triple-A Pacific Coast League affiliate, the Tucscon Padres, to El Paso, where they will be known as the El Paso Chihuahuas.

The move - which comes just three seasons after the Padres moved their Triple-A affiliate from Portland, Oregon - will result in a realignment of the Pacific Coast League, which will move the Oklahoma City RedHawks into the American Northern Division with Colorado Springs (COL), Iowa (CHC), and Omaha (KCR).

The other big move this offseason* involves the Cleveland Indians' Double-A Eastern League affiliate. The team has been known as the Akron Aeros since 1997, but they're being re-branded for 2014 as the Akron RubberDucks. Two capitals, no spaces.

(* The Bristol White Sox were purchased in October by the Pittsburgh Pirates. Their new name has not yet been announced.)

I was in college at nearby Kent State when the Canton-Akron Indians moved to Canal Park and became the Akron Aeros. They are one of the minor league teams on whom I cut my teeth as a fan, so this change has captured my attention. I will admit, I am a fan of the change. Most of the people I talk to around minor league baseball are fans of the change. But the reaction from my friends in northeastern Ohio has been largely negative. Shouldn't a team name be menacing, they ask? Why does the logo look like Daffy Duck got run over by a car? (That last question is a direct quote from my college roommate.)

To me, this misses the point of minor league baseball. The minor leagues aren't about menacing team names; they're about family-friendly environments. As RubberDucks Director of Media Relations Adam Liberman told me in a phone interview, "This is a pro sports town, for the most part. The goal in pro sports is to win. Bottom line: Win the game. That's not the goal of a minor league team, on or off the field. They'd like to win, but winning is a byproduct of player development and of players playing well on a given day or time."

As members of the 15% of minor league fans who go to games for the baseball and for the prospects, it's sometimes easy to forget that the rest of the crowd doesn't really care all that much about Nolan Fontana's on-base percentage.

Those other 85% are the families you see littered around the ballpark. The kids in the bounce house in right field. The ones posing for pictures with the mascot. The ones with chocolate ice cream smudges on their chins. They don't know their Matt Duffy from their Jon Singleton. They're there to be entertained.

"You will see something that has never been done each year and the bar keeps getting raised."-Pete Subsara, Hickory Crawdads

"I couldn't agree more," said Pete Subsara, the Director of Promotions for the Hickory Crawdads, the Rangers' Class-A South Atlantic League affiliate. "Entertainment. That's why many teams hire someone to put together a promotional lineup for the season and create an outstanding show for every game. It certainly is an integral part to getting fans into the stadium each and every night."

Promotions aren't just giveaway nights, either. "There are hundreds of entertainment companies out there with specific acts that will reach out to you and inquire about possibly coming out for a game to entertain the crowd," says Subsara. "You will see something that has never been done each year and the bar keeps getting raised."

George Costanza Night? Nobody Night? How about Awful Night in Altoona? Four Weddings and a Funeral? Win a Date with Henry Wrigley? These are things that would simply never happen at major league games, which are Far Too Serious™. But they're perfect for a minor league team fighting to get butts in the seats.

There's a lot of competition for a family's entertainment dollar, and minor league teams are no exception. Almost every year, teams are forced to consider shuttering their doors. If Major League baseball is Big Business, minor league baseball is decidedly small business. They're in competition with the local cineplex; the water park down the road. Modern Woodmen Park, home of the Quad Cities River Bandits, added a zipline, a ferris wheel, and other attractions this season in an effort to lure families to the park. 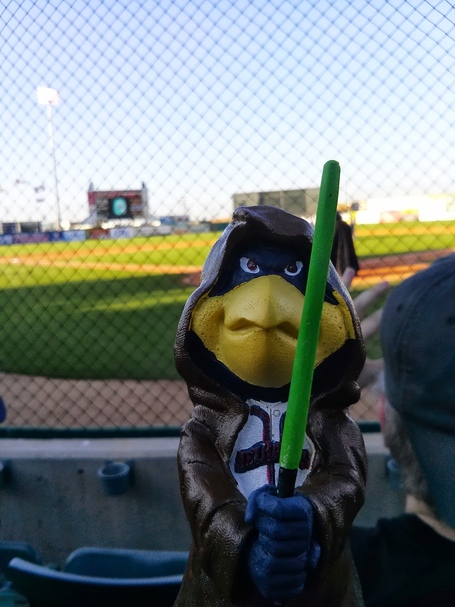 What's the financial impact of a re-brand?

Determining the financial impact of the Akron re-brand is difficult, because quite frankly, it doesn't happen very often. When teams change names, it's usually either because they've moved (like El Paso) or changed affiliates (like Bristol).

The Greenville Drive (BOS) took an approach more in-line with Akron's re-brand when they adopted that name in 2006 after a single season as the Greenville Bombers, a holdover from their days in Columbia, where they were known as the Capital City Bombers.

One thing we know is that Akron's new ownership group, led by Ken Babby (former chief revenue officer and general manager of digital operations at the Washington Post, and the son of the Phoenix Suns' President of Basketball Operations), focused more on the fan experience. More promotions, more emphasis on the family, and the highest attendance figures in six years, despite a fifth-place finish in the Eastern League Western Division.

A few months ago, I spoke with a friend about minor league baseball. He mentioned how much more fun their games are than major league games, with shows between innings and lots of promotions. "Maybe it's because there's less pressure in the minors," he said at the time, "so they make it more fun."

To me, there's more pressure in the minors. Not just for the players, who are trying to make their lifelong dreams come true by reaching the majors, but by the teams, who are often just scraping by, financially. That's why they work so hard for your entertainment dollar: They have to. That's also where a re-brand can have a positive effect. Not only does it stir new merchandise sales, but it also creates buzz.

As Subsara points out, "One game can change the outlook of someone who has never been a fan. If they enjoy themselves, they will most likely make it out to another game. That's why every night is important for a minor league baseball team, whether it is a slow Monday night, or a buzzing Friday evening. Providing an outstanding show and creating an experience that fans won't forget night in and night out is vital. I think the Akron RubberDucks have already sparked the city and it's all uphill from there."

And the idea that the RubberDucks re-branding (or as they prefer to call it, "new identity") was a straight cash grab? Overblown, according to Liberman. "I'm not saying it's not nice for us to make some money on merchandising. Obviously, that's the case. But that's not the goal. That's not why it was done. It's a nice side benefit for sure, though."

What does any of this have to do with the Astros?

As Jim Crane talks about moving the Astros' Triple-A affiliate to The Woodlands, these are the questions he needs to be asking. It's not enough to want to have the teams in the high minors closer to the front office. Such a move would require a lot of money. Money to purchase a team, money to move the team, money to re-brand the team, money to build a stadium.

Making such an investment without considering whether or not that team is going to make enough money to sustain itself is bad business.

Most rumors have circulated around Crane buying the New Orleans Zephyrs, who have been in existence since - get this - 1900. They've been in New Orleans since 1993. Their name is even older (they kept it when they moved to New Orleans because of its relevance to the Zephyr Roller Coaster at Pontchartrain Beach Amusement Park). They play in a city of almost 400,000 people, many of them already Houston Astros fans. 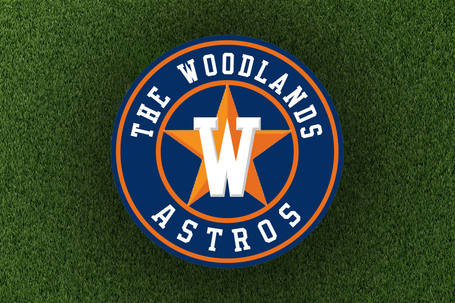 The Woodlands, on the other hand, has a population of about 105,000. It would be the smallest city in the Pacific Coast League, even if you don't tie Austin in with Round Rock:

* All figures except The Woodlands from 2010 U.S. Census.

In discussing this issue with TCB writers who are more familiar with the area, it seems that the northern parts of Houston are not only well-populated now, but they also seem to be experiencing an extreme population boom. CRPerry13 mentioned that it may not be unreasonable to assume that there could be 5+ million people in Montgomery County within two decades. The Sugar Land Skeeters drew over 450,000 fans in 2012, and a team on the north side could prove to do equally well, if not better, in such a scenario.

Adding a minor league team can have a major impact on a city. I had a front-line view of a minor league transition at its very best: In 2000, when the Rockford Reds moved to Dayton and became the Dragons, it simultaneously revitalized downtown Dayton and it became an enormous cash cow for the ownership group (headlined by Magic Johnson and Archie Griffin). In 2011, the Dragons sold out their 815th straight home game, breaking a record for consecutive sellouts by a professional sports team, previously held by the Portland Trail Blazers. Since their inception, they've averaged 116% capacity at Fifth Third Field. When the Aeros initially moved to Canal Park in 1997, that became the cornerstone of that city's regrowth. Those moves are a dream come true for a minor league franchise. They're also exceptionally rare.

On the other hand, you have the Reno Aces. Reno has a lot going for them: They're in the same general market (albeit very general) as their major league franchise. They're in a large-ish market. After attendance fell to 245,121 in 2007 for the Tucson Sidewinders, the Arizona Diamondbacks moved their affiliate to Reno. The Aces' inaugural season was a huge success, bringing over 466,000 people through the turnstiles. Every year since, their attendance has dwindled:

Certainly, other factors are at stake here, as attendance is down across minor league baseball. But a +25% drop in attendance is certainly not good for anyone. This is a fairly typical arc for new teams. The same year the Diamondbacks moved to Reno, the Braves moved their Triple-A International League affiliate from Richmond to Gwinnett, where they debuted to an attendance of 423,556. Their attendance in 2013 was 323,799 - or just 76.45% of their inaugural season.

Over the same timespan, longer-tenured teams have had better success. For instance, the Buffalo Bisons (TOR) had 537,747 fans in attendance in 2013 - 101.5% of their 2009 totals. Other teams, like the Norfolk Tides (BAL) and Rochester Red Wings (MIN), have stayed within 90% of the attendance figures from that season.

At the end of the day, we never really know how a new market is going to react to the addition of a minor league team. In a best-case scenario, it could tap into the emerging businesses and growing population and turn into an enormous revenue stream. In a worst-case scenario, the team could fail to find a way to compete with other local entertainment resources and never truly find an audience. With the New Orleans Zephyrs boasting attendance near 345,000 in 2013, Jim Crane will have to wonder whether re-branding or moving the franchise to a city would make financial sense.

And the El Paso Chihuahuas and Akron RubberDucks may be just the case studies he needs to observe to help answer those questions.