Astros offseason: Drilling down through the center field position

Checking in on the Brandon Barnes-dominated center field position and its future in the organization.

Share All sharing options for: Astros offseason: Drilling down through the center field position

Hey, remember last week when we put together our first in a series of looks at Houston's depth chart at certain positions? Not a lot to be thrilled about in right field, but today we move down a step on the positional numeration to center field.

These won't be comprehensive lists, but are instead meant to be quick looks. They should inspire you to debate my choices and who should actually fit those spots. Since the outfield has been such a hot topic this winter (hello, Shin-Soo!), let's start there. Specifically, let's look at the right field spot and how Houston is set right now.

Thank Brandon Barnes for stabilizing this position for the Astros. Unlike right field, Houston center fielders totaled a respectable 1.4 WAR last season. Don't get me wrong, that was still fifth-worst in the majors. It just wasn't the cess pool of production that right field was. 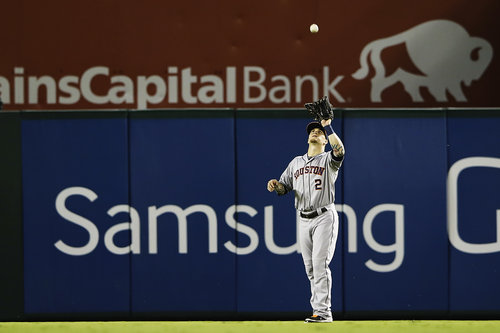 How did Brandon Barnes hold up against expectations last year?

Houston's center fielders hit .249/.307/.360 as a group with 14 home runs and 21 steals. The Astros defensive numbers in center weren't great, ranking 19th overall but their baserunning numbers were horrible and put them fourth-worst overall. Thanks Robbie Grossman.

Barnes led the group and you know what kind of season he had. He was Houston's best defensive outfielder, ran the bases fairly well and didn't hit a lick. Which, you know, sort of explains Houston's center field problem.

Barnes is probably the "now" at the position for Houston, but he won't be there for long.

Ahh, George Springer. You comfort me in my weaker moments. Soon, you will protect us from losses with your mighty bat and fleet feet. You will run down fly balls with abandon and leap over Tal's Hill with a single bound.

A child will start choking on a hot dog in Row 134, but just a glance from you will fling the offending weiner out of the child's throat.

Your very breath will make the air at Minute Maid Park antiseptic.

Your glove will be made from a white buffalo and have the power to steal three home runs at the same time.

You will be able to steal second before anyone can react, including your personal bat boy, the Flash.

Your bat will be made out of a redwood and will test the limits of not only MLB's specifications, but the very fabric of physics itself.

Your swing will cause puppies to dance, even if there are no puppies for miles around.

You will be great.

If you aren't all of those things...

With this spot, it's less about a player as it is about a thing: Springer's arbitration clock, to be specific. This is the thing we've been afraid of for a solid year now.

What is it? For those of you not familiar with Prospect Law, here's a brief overview:

We have no idea how the Astros will weigh any part of that decision, so there's no way of knowing when exactly he'll be in the majors.

The Astros are not going to make decisions flippantly. They have a Decision Sciences department, for goodness' sakes. The decision on when to bring up Springer will be weighed carefully with future financial commitments on one side and potential roster impact and development on the other. If that equation balances toward him being in the majors, I'm confident the Astros will make that move regardless of service time.

It's still a wild card. We have no idea how the Astros will weigh any part of that decision, so there's no way of knowing when exactly he'll be in the majors. 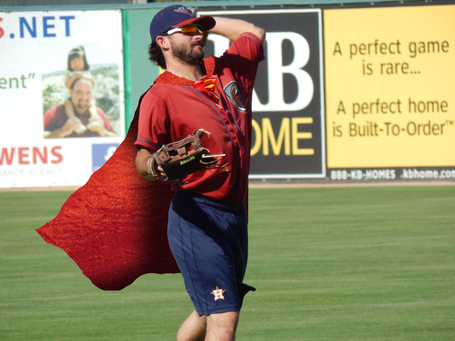 Give this one to a favorite of mine, Andrew Aplin. The former Arizona State center fielder made it to High A Lancaster after being drafted by the Astros in 2012, but stayed there for all of 2013.

He did not disappoint. Aplin hit .278/.376/.424 with nine home runs and 24 steals in 598 plate appearances. Aplin also posted a walk rate that was three percent higher than his strikeout rate. Basically, he owned in every offensive category and didn't do it just because of the "Lancaster Effect."

Oh, he also did pretty well defensively and should be able to stick at the position in future years. He may not be as complete a prospect as George Springer, but he could absolutely develop into the next Jon Jay for the Astros in the new couple of years. If Springer ever moves off of center, Aplin could take over for him pretty easily.