Houston made a trio of roster moves on Wednesday afternoon to set its 40-man roster before the Rule 5 draft.

Namely, the Astros grew closer to finalizing their 40-man roster for the Rule 5 draft. In advance of that, the team made a few roster moves, outrighting J.D. Martinez off the 40-man and onto Oklahoma City, releasing John Ely, waiving Jake Elmore and claiming shortstop Ryan Jackson from the Cardinals.

With those moves, Houston currently has 34 players on its 40-man roster and likely added a few names to that list last night. As soon as we see which guys got added, we'll post it here. But, for now, let's talk about Wednesday's moves.

The Astros made a swap of backup middle infielders Wednesday, waiving Jake Elmore (who was then claimed by the White Sox) and claiming Ryan Jackson from the Cardinals. Here's Jackson's very first Astros baseball card, courtesy of graphics designer extraordinaire Ryan Dunsmore: 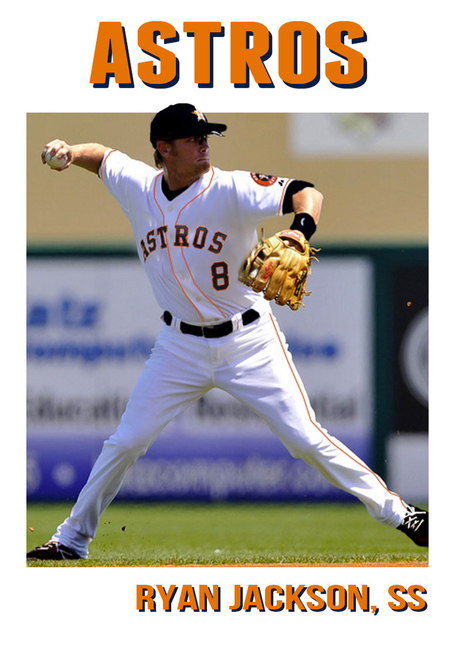 What does Jackson bring? Well, for one, he's a plus defender at one of the most important defensive positions. That's not just from Jeff Luhnow's fascination with Cardinals prospects, either. Marc Hulet of FanGraphs concurs with his defensive ability:

Jackson hit .278/.352/.346 in 510 plate appearances for the Cardinals' Triple-A team last year while stealing 9 of 9 bases. He's gotten a cup of coffee in the majors the past two seasons at second base, but never stuck there for whatever reason. He offers a good eye at the plate, fluctuating between 8-10 percent walk rates in the minors with a strikeout rate between 17-20 percent.

Basically, he'll be a bang-up defensive backup for Jonathan Villar and Jose Altuve in the Brenden Ryan vein. Which is not a bad addition off the waiver wire, considering the real Brenden Ryan just got $2 million from the Yankees to serve as "Jeter insurance."

It's sad to see Jake Elmore go, as he had quickly turned into one of my favorite non-star players. But, Jackson strengthens the team's bench defensively, which was a big problem for the 2013 Astros.

Talk about a fan favorite leaving town. I'm sure there will be some of you bummed out by J.D. Martinez getting outrighted off the 40-man roster on Wednesday. It doesn't remove him from the organization, but it does hamper his ability to make an impact in the future.

We all had big hopes for Martinez, especially after he blistered the ball to begin the 2012 season. He just couldn't sustain it for whatever reason and was replaced on the depth chart by guys like Marc Krauss and Robbie Grossman, who had been brought in by the current front office.

Martinez is still young and hitting fairly well in the winter leagues. If he can regain some of his power and start hitting for average again, there's a chance he'll get another opportunity in Houston. But, those chances just got a bit smaller.

The last move Houston made was in releasing right-handed pitcher John Ely, who was acquired last spring from the Los Angeles Dodgers for lefty prospect Rob Rasmussen. Ely missed the entire 2013 season after undergoing Tommy John surgery on his elbow.

Pitching is unnatural. This is not the first time you needed to be told that. Pitchers get injured. Houston rolled the dice with a major-league ready pitcher in Ely and it came up snake eyes. That doesn't mean last year's trade was bad, as Ely still had a better chance of contributing to the majors than Rasmussen did.

No, Ely was just a product of Houston wanting depth for the major league rotation and injuries wrecking all those plans. They probably wanted guys who would prevent them from having to rush the Brett Oberholtzer's and Jarred Cosart's of the world to the majors, but injuries to Ely, Alex White and Rudy Owens scrubbed those plans.

Now, though, the next wave of guys is close to being ready. Within the next year, Houston could see Asher Wojciechowski, Jake Buchanan, Mark Appel and even Mike Foltynewicz ready to join the big league rotation, so upper-tier depth isn't as crucial as it was a year ago. That may be why Ely is headed out of Houston before we even got a chance to know him.