Astros offseason: Drilling down through the right field position

Thanks to a great suggestion from a commenter, we're looking at each Astros position, who's the future, who's the now and more.

Share All sharing options for: Astros offseason: Drilling down through the right field position

When we were writing yet another offseason rumor post about how the Astros were kinda, sorta not going to do much this winter, a reader came up with a great idea. Some of the other commenters have already run with it, but it inspired me to start this feature, where we look at each of Houston's eight positions in depth.

These won't be comprehensive lists, but are instead meant to be quick looks. They should inspire you to debate my choices and who should actually fit those spots. Since the outfield has been such a hot topic this winter (hello, Shin-Soo!), let's start there. Specifically, let's look at the right field spot and how Houston is set right now.

Of the six right fielders, only 2 are still with the Astros: Martinez and L.J. Hoes.

That motley group was equally bad with the bat and the glove, ranking as the sixth-worst group of defenders at the position in the league. The only saving grace? Houston's right fielders were the 12th best in baserunning factor last season, according to FanGraphs.

Six players made up this group, with J.D. Martinez leading the way with 310 plate appearances. Coincidentally, he had the worst WAR (-1.1) and worst defensive component (-11.4) of the group. Not to be outdone, though, Jimmy Paredes was the second-worst, totaling -1.0 WAR in just 135 plate appearances there.

The best RF of the group? Justin Maxwell, who totaled 0.4 WAR in 151 plate appearances. Maxwell represents another reality here, though. Of the six right fielders, only 2 are still with the Astros: Martinez and L.J. Hoes.

Trevor Crowe actually got the bulk of the playing time in the season's last 30 days, getting 100 plate appearances, while Hoes had 66 unspectacular PAs. If there is a 2014 option on the roster right now for right field, it's probably Hoes.

That'd be prospect Domingo Santana, who hit 25 home runs and stole 12 bases while batting .252/.345/.498 in Corpus Christi last season. Though his batting average wasn't great, the 21-year old held his own as one of the younger players in the Texas League.

Santana isn't a can't-miss prospect, but he hits for power and he's proven himself at Double-A, suggesting he could see Houston in the next year or two. Given the state of the current right field, that possibility is almost certain unless Houston lands a big-ticket free agent at the position. 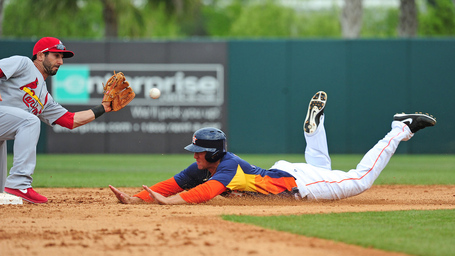 When the Best Prospect In Baseball (patent pending) destroyed the entire world last year, we rended garments at his exile into the wasteland of Triple-A. After he completed his excellent season of progress and baseball-murdering, Springer has given us hope he can come up next year and be a staple in the outfield.

Most of us assume that he'll be a center fielder, since he's gotten raves for his play there in the minors. He's fast and could cover plenty of ground in Minute Maid Park, making him a great fit there for years. But, not everyone is sold on that fit.

In fact, some of our TCB minor league writers have suggested in the past that Springer ultimately ends up in right field. If so, that shakes up how we view this position in the long term. Maybe Springer plays center field for a year or two while he stays athletic.

But, what if he suffers a leg injury in between now and 2016? What if he loses a step? Is that enough for the Astros to bump him to the side?

That, ladies and gentlemen, is the definition of a wild card.

Drafted in 2012 out of Jacksonville University, Dan Gulbransen isn't the sexiest name on Houston's prospect list. But, he more than held his own last season while making it up to High A Lancaster. He played all over the outfield, but managed 28 games in right field after opening the season in short-season ball.

Gulbransen has flashed a great walk rate at times in the minors while hitting for some power and maintaining a decent batting average. He also has a little speed and doesn't strike out very much. If he can play reasonably well defensively in right, he has a chance to surprise and challenge for a spot there by 2015.

That is, unless one of the above guys locks things down.