This is another application of the Fielding and Ballpark Independent Outcomes system that I have been using to grade the statistical performance of minor league arms (most recently the 2013 Tri-City and Greeneville ones). Only this time I am skipping ahead several leagues to apply it to the American League. As before, once a run expectancy matrix for the league and season is constructed via review of its play-by-play event data (accessible via the MLB Advanced Media Gameday folders), I resolve all plate appearance outcomes down to 12 general events and compute what each of those 12 events was worth in terms of runs, on average. The table below shows the average run values associated with each event type in 2013 American-League-park-situated games, excluding bunts and foulouts. 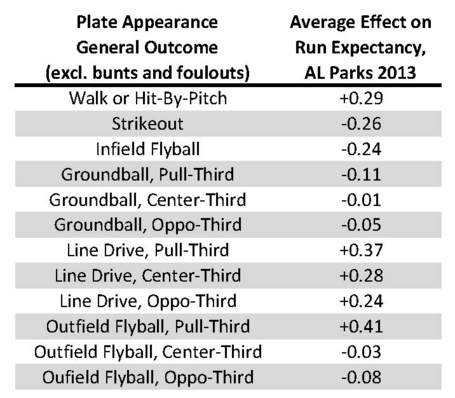 Scrolling down the table reveals that a walk or hit-by-pitch, on average, increased an inning's run expectancy by 0.29 runs, a strikeout lowered an inning's run expectancy by 0.26 runs, ... and an outfield flyball to the batter's opposite-field-third sector of the diamond decreased the expectancy by 0.08 runs. The next step is simply to count up the total number of each of the 12 events for the pitcher under analysis and charge them with the number of runs specified in the relevant row of the table for each event; dividing that sum by the total number of plate appearances yields a single number for each pitcher that quantifies what a plate appearance against said pitcher was worth in terms of runs on average that season (this number generally ranges from -1 to +1). At this point we have essentially graded the performance of the pitcher independent of things that are largely out of their control such as ballpark factors, defensive fielding variables, and whether batted balls of certain event types went for hits or extra-base-hits at a higher or lower rate than typical.

To gain insight into the path via which each pitcher arrived at their Performance Score, three other scores are computed that quantify how the pitcher graded out on batted balls, control, and strikeouts (the Batted Ball Subscore amounts to recomputing the Performance Score with the walks, hit batsmen, and strikeouts stricken from the numerator and denominator; the Control Subscore references the rate of walks plus hit batsmen per plate appearance; the Strikeout Subscore references the rate of strikeouts per plate appearance). These subscores also make use of the 20-to-80 scale described above, as does an Age Score that quantifies how young the pitcher was relative to the sample of 101 pitchers.

Bedard, the clear elder statesmen of the ninesome, topped this list and was the only one to beat league-average in Performance Score (41st best of the 101 arms). He was closely followed by Keuchel, who rates very near to average on all measures including the Batted Ball Subscore, which one might otherwise expect to be a bit higher given his groundball bias. Norris, too, was very average across the board. Peacock, who several TCB denizens had likened to Norris prior to the season, immediately followed Norris in the AL rankings and essentially confirmed those earlier suspicions. Oberholtzer's 67 Control Subscore was bettered by only 3 of the 101 pitchers.

Some preseason analysis I published here on the professional numbers of Harrell and Cosart painted Cosart as a harder-throwing version of Harrell. The above scores strongly support that notion with Cosart and Harrell ranking 3rd and 5th best among the 101 pitchers on Batted Ball Subscore and 101st best and 99th best on Control Subscore, respectively (we'll delve into the intricacies of their similarities and differences a bit later). Lyles would seem to have gone backwards a small bit in the control and batted ball departments versus a year ago. Humber was the only of the nine to rate more than 1 SD below league-average in Performance Score.

We can also grade each pitcher looking only at how they fared versus lefthanded batters (LHB) or versus righthanded batters (RHB). This shows that while Harrell and Cosart are very much the same against all batters on these scales, they arrived at that destination via two different pathways. Harrell was essentially the same guy versus LHB as he was versus RHB, whereas Cosart was the 11th best of the 101 pitchers versus LHB in Perfomance Score and the 101st best versus RHB.

In Cosart's case we are almost surely seeing the effects of his cutter-variant fastball in the disparate splits. The pitch moves slightly down and away from a RHB at a late moment commonly shifting the point of contact from the sweet spot towards the end of the bat (the movement tends to stay very near to the contact plane of the RHB swing). Against LHB, that same late movement is directed more perpendicular to the swing plane causing batters to swing over the ball with either a whiff or topped-and-jammed groundball the likely result. There's also likely a bit of the extreme verticalness of Cosart's breaking ball at play there, with that pitch too being accordingly more effective versus LHB than versus RHB. Peacock serves as a bit of an anti-Cosart in rating as one of the better pitchers versus RHB (11th best of 101) and one of the worst versus LHB (94th of 101), as does Humber. Keuchel rated very well versus LHB, placing 7th overall in Performance Score against them; those numbers suggest that relief specialization may be a viable fallback plan if he fails to stick as a starter.

Though the distributions of Cosart's and Harrell's batted balls were rather similar when sorted by type and field direction, the ultimate outcomes of them clearly were not. As shown below, the most striking difference was what happened on the rather rare occasions when batters did manage to hit an outfield flyball off them.

Batters hit for about twice the average on the 102 Harrell fair outfield flyballs as they did on the 32 Cosart ones (0.325 versus 0.156) and slugged 3 times higher (0.951 versus 0.313; Cosart was more than 2 times under the league norm in slugging on outfield flies). And that reminds us that there is something rather important that is not being quantified here and that is how hard the batted ball type is hit to the corresponding region of the diamond (this is some product of the velocity of the ball off the bat plus the launch angle of the ball trajectory off the bat). Though the batting averages against Harrell for all 3 event types increased in 2013 versus 2012, the most glaring difference between the 2012 and 2013 numbers is that the slugging on outfield flyballs was .200 higher in 2013 (0.951 versus 0.750; that amounts to roughly 0.270 above the 0.681 2013 league norm for slugging on outfield flyballs).

With strides forward in the control and/or strikeout departments, how might Cosart and Harrell rate via this sort of scheme versus their peers? To get some idea, we can glimpse at how other similar American League Batted Ball Subscore stalwarts rated.

Given Cosart's relative youth, extreme fastball velocity, and fits of wildness, something not quite up to Masterson's line here may be the best case scenario as he gains more experience and learns to generate more swing whiffs (especially against righthanded batters). Given age, fastball velocity, and secondary pitch considerations, the otherwise similar Harrell would stand to have a lower ceiling on his strikeout potential and thus something rivaling the lines of Richards, Deduno, or Pelfrey would be a better to more typical case outcome for 2014 and beyond. 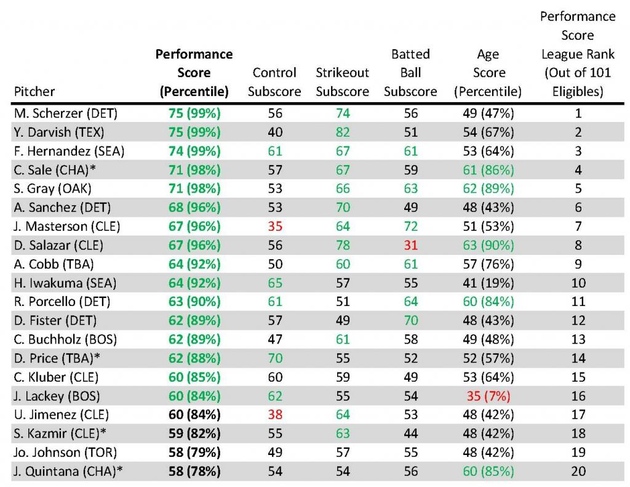 2013 Cy Young winner Scherzer had the highest Perfomance Score and was joined by 3 Detroit teammates in the the Top 12 (none of them were named Verlander, who ranked 24th). Five Indians made the Top 18, including free agents Jimenez and Kazmir. Sale was the top-rated lefty; with White Sox teammate Quintana rounding out the Top 20 those three American League Central clubs accounted for 11 of the 20 highest Performance Scores. Gray and Salazar had very strong showings per this system in their abbreviated major league debuts.

So which pitcher's scores did you find most surprising, in either direction?

Which Astros' scores were most surprising?