Is Choo the Astros' Sequel to Carlos Lee?

Shin-Soo Choo could easily be the sequel to Carlos Lee. But fans don't seem to care, and CRPerry13 does not understand it.

Share All sharing options for: Is Choo the Astros' Sequel to Carlos Lee?

It has come to my attention that the Astros fielded a light-hitting outfield last season, and that some of you think the solution is to find a free agent on the market to step into the void.  While I agree wholeheartedly that this solution is a valid avenue to increasing the number of runs scored in 2014, it seems to me that if executed in a manner that reflects overreaction due to despair-driven aggrandizing of one particular player as a white-horsed knight come to save the Astros' pythagorean win expectancy, well, that would be bad.

Kudos to you if you managed to make it through that previous sentence unscathed.  The target of my befuddlement is some fans' newly found puppy love for Shin-Soo Choo -- a fine outfielder who would be a positive contribution to any Major League baseball club.  It's not that I think poorly of Choo.  Quite the opposite, actually.  I like how he plays the game.  But let's not get confused about who he is.  During the past several seasons, Choo has been a near-All-Star-level hitter...against Right-Handed pitchers.  He has had elite on-base ability, again, against right-handers.  As such, he is very worthy of a good free-agent contract from somebody.  Maybe even the Astros!

I shall decline to take the easy path by pointing out Choo's deficiencies as a hitter and a defender, because frankly those things are irrelevant to my point.  All players have deficiencies, and Choo is no magical exception.  Rather, I am boggled by the casual abandon by which Astros fans gleefuly proclaim they would be happy with any contract to land Choo this offseason, even one reaching the 5 years, $90 million suggested by his agent, Scott Boras.

This town?  This baseball club?

Lest we fall victim to extremely short-term memory, here is a comparison of two 30-year-old baseball players, during the previous season prior to their free agency:

For all the people who say that two good years of Choo are worth three bad years on the back end of his contract, remember the lesson of El Caballo.

No need to remind everybody about Carlos Lee.  He was the big dude who hit baseballs for the Astros during the Ed Wade era.  But I will remind you of the fans' opinions of him during his career.  Here are actual comments lifted from The Crawfish Boxes regarding Lee, and more specifically, his contract.

Even in the years when he hit, I didn't like him.  I could never get over the contract.

Good player, but too bad he is judged almost solely on a bad contract bestowed on him by a clueless front office that saw him as a franchise player rather than the complementary player that he really was

Lunhow should just designate his ass for assingment.  Remove him from the 40 man roster, and let him go ranch and spend time with his family. He’s a sunken cost so he’s going to get paid no matter what, but he doesn’t need to be playing for the Astros anymore.

Carlos Lee will never be a part of a good Astros team. He’s an untradeable sunk cost. At 35, it is clear what type of player he is...There is not a single player on the Astros that I am less interested in reading about.

He was not hated for the statistics...He was hated because he was the living breathing walking talking embodiment of what was wrong with the Astros. A constant reminder of the lunacy that was Drayton McLane never using the "r" word (rebuild).

Lee provides an example of why teams should not give good hitters contracts which should be reserved only for elite hitters.

For all the people who say that two good years of Choo are worth three bad years on the back end of his contract, remember the lesson of El Caballo.  During Lee's first two seasons with the Astros, he was worth 6.3 Wins above Average (WAR).  For the remaining four, he was worth 2.4 total.  Lee was excellent for the first two seasons.  But after that, when he aged (as baseball players are wont to do in their early thirties, and as we can reasonably expect Choo to do as well), fans hated him.  They slandered him, called him fat, called him lazy.  Said he was a sunk cost, a horrible contract, an embarrassment to humanity.  And worse things - things I found in the message boards but am not mean-spirited enough to quote.

Philosopher George Santayana said, "Those who cannot remember the past are condemned to repeat it."  It seems that many internet Astros fans are self-inflicting a form of forced amnesia on themselves.  And why?  My only guess is that after three 100-loss seasons, these fans are placing anybody up on a pedestal as the savior who will bring the Astros back from the brink.  Well, Carlos Lee was supposed to be the bat that returned the Astros to the playoffs, but one man does not a team make.

Choo?  Sure, sign him - he's a good player who could hit second or sixth for most clubs.  But sign him for three years, not five, six, or seven..  Otherwise, down the road, Choo's contract could have the effect of preventing the Astros from extending a George Springer or Jarred Cosart, or could prevent them from signing a Mike Trout or Bryce Harper (or both!) if they become available during free agency.  Think about that for a moment, and decide if you really want the Astros to repeat the mistake of handing an elite-level contract to a very fine, but not star-level, baseball player.

Update:  Once again, I fall victim to the effects of writing an article several days prior to publication.  This weekend, ESPN's Jerry Crasnick reported that Choo's agent Scott Boras is seeking a deal for the outfielder that will top Jayson Werth's 7-year, $126 million deal from a couple seasons ago.  While the annual value of that deal is identical to the 5-year, $90 million projected last week, the two extra years ensure that the signing team will experience buyer's remorse at the back end of this deal, as Choo would be 38 years old at its conclusion.

Sabermetricians have studied player aging relentlessly - it is one of the most oft-repeated studies done by baseball desk jockeys - and universally, the results show that a player in his mid to late thirties drop drastically from the level of production they experience at their peak.  This study performed in 2011 by Beyond the Box Score, for example, shows that a hitter is worth about 50 RAA less at age 38 than at 28.  Fielding RAA also drops by a large factor as a player ages.

None of this changes the thrust of my article though.  Even if Choo is worth the contract at the front end (when the Astros are non-competitive), by the end of the contract when the Astros are presumably back in the playoffs, Choo is unlikely to be a productive player, but will earn so much money that he could prohibit the Astros from signing another player who would really help them reach their ultimate goal of championships. 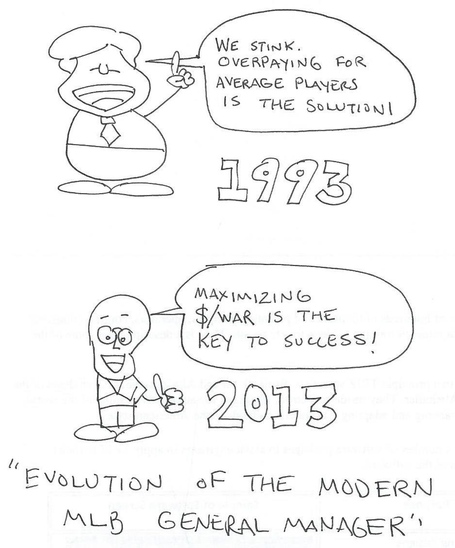