Often derided among modern stat-heads, this year's class is the first selected using, in part, a new sabermetric component. Has it helped?

Share All sharing options for: 2013 Gold Gloves, part 1: A step towards legitimacy?

Ever since sabermetrical analysis evolved from a niche curiosity into a paradigm shifter accepted by scores of fans and baseball professionals alike, seemingly nothing this side of pitcher wins has evoked more snorts, snickers and upturned noses from the new wave of baseball rationalists than the Rawlings Gold Glove Award, which have been bestowed annually since 1957 to the players judged as the best defenders at their positions in each league (or, if you ask the sabermetricians, to the best hitters at their said positions).

A quick search for articles returns numerous articles, often from prominent writers and thinkers, about the inadequacy of the award and it's underlying process, and it has been widely ignored by large parts of the baseball fandom in recent years. And then at last, a week into the Spring Training season this year, SABR announced the inclusion of a new sabermetric component into the selection process. The question then, now that the recipients have been announced, is whether or not it had an appreciable effect and players that may have been snubbed in the past would now be given their just accolades.

DRS (Defensive Runs Saved) and UZR (Ultimate Zone Rating) are two of the most widely-accepted modern defensive metrics, and indeed both were used as part of the new "SABR Defensive Index," along with Runs Effectively Defended, as well as two metrics formulated using play-by-play data; Defensive Regression Analysis and Total Zone Rating. As DRS and UZR are easily accessible and draw more on the advanced technology available to us today, we'll use them and take a quick look at how well the awardees actually flashed the leather, and whether there's any indication that this year's class had better defensive seasons than past winners, which were chosen exclusively by Major League coaches and managers.

For those unfamiliar with the two metrics, Fangraphs has some excellent, in-depth information on understanding both DRS and UZR, but to give you a quick primer, they are both presented in the same manner; a zero (0) is considered dead-average at a given position, and as you go higher above zero, the better the defender was, while a negative number indicates below-average play.

Note that UZR data is not compiled for pitchers for various reasons, among them that their defensive zones are relatively small and they normally yield to other infielders on ball not hit right back to them or very near them.

We see that they got it "right" in the American League, awarding the the league leader in DRS with the hardware, but several statistially-better performances went un-rewarded in the Senior Circuit. It should be noted, though, that the differences in actual runs saved amongst the winners and the rest of the top ten is relatively small, thanks in large part to a much smaller sample size than the other positions have, as a pitcher is only playing once every fifth day as part of their rotation. In reality, the defensive difference between Wainwright and Corbin is likely fairly small, or at the very least, it would be premature to draw any sort of conclusion about their abilities with such limited data.

For catcher, I've relaxed the minimum innings qualification to 750, as catchers get more off days than regular position players, and the people voting for the awards would likely not count that against them. Also, like for pitchers, UZR data is not compiled for catchers.

Once again, the AL winner was indeed the best statistically-ranked backstop, and by a rather strong margin. Molina's previous Gold Glove wins and huge popularity probably contributed to the upset in the NL, though he certainly had an excellent defensive season himself. 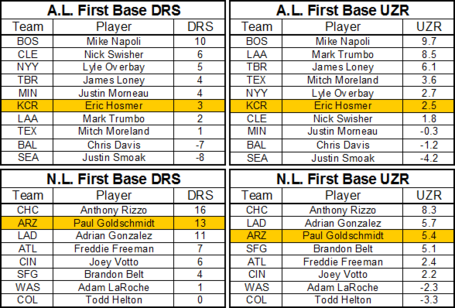 Napoli is notable in that he had a good year offensively, is a well-know, high-profile player, played in a large media market and his team went deep into the playoffs. Despite those factors, which many have claimed to have played roles in previous upsets and snubs, he didn't take home the award despite also being the clear top defender in both metrics. The aforementioned upsetting factors look to have potentially played a role in the more well-known Goldschmidt winning. He also had a much better offensive season (156 wRC+) than did top defender Rizzo (102 wRC+). 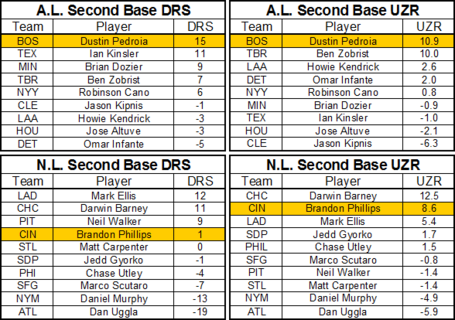 Pedroia is a clear success, and Phillips, while not the best in either metric, is far from a groaner. We're beginning to notice some real discrepancy in what the two metrics think of players as well; note that DRS has Kinser as an elite defender, while UZR says he's a bit below average. A good reminder to we sabermetrically-inclined folks that our numbers aren't perfect and it's important to look at things from many angles.

A trend may be emerging; it's notable that, given the amount of flak the award has taken for being given to terrible defenders (see Jeter, Derek), thus far we've seen no examples of a defensive butcher taking home the hardware, ostensibly due only to their offensive performance and/or standing within the game. 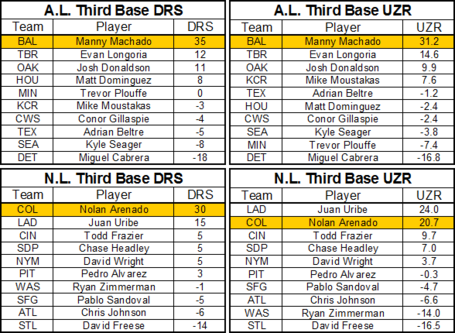 Machado was the clear choice in the AL, and it's nice to see him recognized in the face of the superstar Longoria's superior offensive effort. Arenado is an interesting case, as UZR had him slightly worse than Uribe. It's possible the fact that DRS had him twice as good as Uribe played a big factor in things. Either way, he certainly had an elite season with the glove, and Uribe's offensive production was slightly better; another possible win for the new metrics. 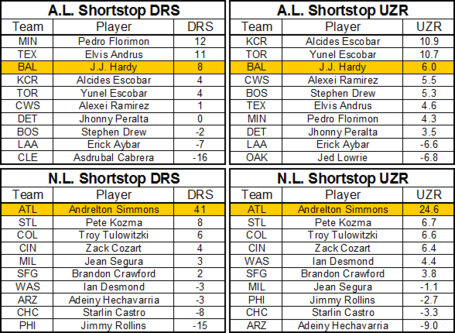 The NL shortstop award looks like a big win for the metrics; despite Tulowitzki having a strong defensive season and a much better offensive campaign (not to mention he's well-regarded as one of the games best stars), a player with fewer than fifty Big League games took home the award while managing just a 91 wRC+. The numbers say Hardy shouldn't have won, but again, he had a very strong year as well, and it's clearly not a case of a poor defender getting the award on the merits of his bat. 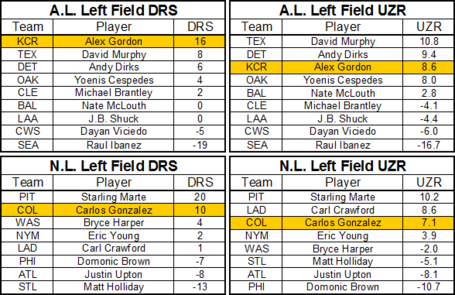 Note that for left and right field, I'm also relaxing the innings qualification as well, as even regular players tend to get a good amount of time at the two different positions.

Gordon looks like the right choice in the AL; while he was third in UZR, the difference was small, and his lead in DRS was a fairly commanding one. The NL appears to be a miss on the other hand, but again, not a terrible head-slapper. 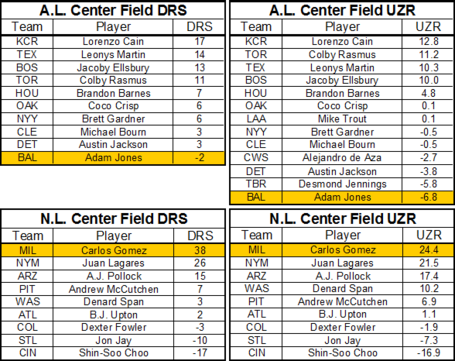 A tale of two cities; Gomez had a spectacular year and was rewarded for it, despite McCutchen having a great year with the bat and glove and his team making the playoffs for the first time since last millennium. On the other hand, the first real flop we've seen is Adam Jones; I had to extend the list just for his 13th ranked UZR, which was dead-last in the AL. You could have made a case for four guys in the AL, and Ellsbury is the big name and had a good offensive year. This one is truly baffling. 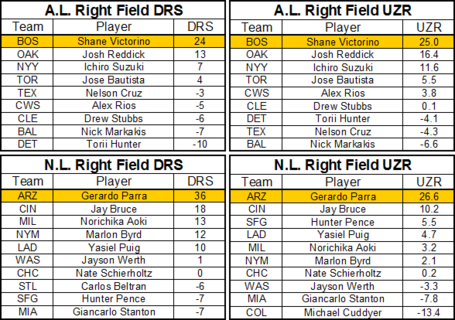 An unmitigated success for the saber-inclined. Parra and Victorino were both clearly the best defensive right fielders in the game this year. Parra is especially encouraging as, while solid, he was far from an elite offensive player. Considering the media frenzy surrounding Puig, couldn't you just see them handing it to him? If you buy into the line that the Gold Gloves have always favored big offense and good stories, you'd be hard-pressed to find one more "deserving" than Puig. Yet, Parra, under-appreciated  and playing for a .500 ballclub, picked it up.

On the surface, there appears to be clear evidence of the positive influence of the new sabermetric component. While arguments can certainly be made for different selections in several cases, Adam Jones is the lone embarrassment this year. Eric Hosmer was an odd choice as well, but he was far from a butcher who grabbed the award thanks to his offensive prowess. As a matter of fact, there are several important points you can take away:

Now, one year does not a solid sample size make, but we can see a definite improvement, right? On the surface, things look great; you have several winners who aren't considered star players, several who's teams didn't achieve post-season glory, some who won with notably mediocre-to-poor offensive numbers (especially compared to their peers). But the real test will be how they look compared to past award classes, prior to the use of the new metrics in the process. We'll take a look at how they stack up against recent history in part two on Monday.