Astros offseason: Would Jose Dariel Abreu be worth signing?

Yesterday, a rumor was floated that Houston may be a front-runner for the Cuban first baseman. Is it a good idea for Houston to pursue him?

Share All sharing options for: Astros offseason: Would Jose Dariel Abreu be worth signing?

Here's an afternoon post, following up on our night post Wednesday. The question won't be if the Astros will sign Cuban defector Jose Dariel Abreu, it's whether they should.

To answer whether they should, let's roll through some questions about him and the situation with the Astros.

We've talked about him before, but Abreu is a hulking first baseman who Jonah Keri described as "(he) might be the best hitter in the world." Obviously, Keri's line was meant to be a hook into his article, where he concludes (back in February of 2012) that Abreu may be the next Ryan Howard.

Anyone jumping out of their seats for Ryan Howard?

It's hard to fathom how good Abreu could be right away, but one thing that's fascinating is the trend he represents.

Abreu fits much of that comp, though. He's a strong hitter, but we're not quite sure what kind of patience he'll have in the majors. He should hit a ton of home runs, but might not hit for a big average. He's big and slow, probably won't be much of a baserunner and is limited to playing first base or being a DH.

He's also 26, meaning he should be entering his prime as a hitter without ever having played in the majors. And he might get $70 million? Yikes.

In that respect, he's not unlike Yoenis Cespedes, in that he signed as an older prospect and immediately made the majors. Another Cuban-born player who has a similar story is Alexi Ramirez, who signed about at Abreu's age and immediately became a decent major leaguer.

It's hard to fathom how good Abreu could be right away, but one thing that's fascinating is the trend he represents. There has been a positive flood of Cuban-born players defecting to the US in recent years. From 1980-2000, only two players were signed by major league teams after defecting from Cuba. One of them was the immortal Rey Ordonez and the other was Barbaro Garbey.

Since 2000, 16 Cubans have been signed to contracts of varying lengths by major league teams. As the decade turned, those deals transformed from the four-year, $3.6 million deal Yuniesky Betancourt got to the massive $70 million number being kicked around for Abreu.

Why has there been such an emphasis here? One reason may be due to the international signing rules. Putting a cap on international free agent signings makes players like Abreu more coveted. IFAs who are over 25 don't count toward the cap, so teams can still flex their financial muscles in this one niche.Think of it as the Japanese free agency system without the posting fee.

I'm not sure it qualifies as a trend, since so few Cuban players defect now, and fewer still are over the age cutoff. That limits the number of players which teams can bid for, but does create interesting situations like this one once or twice an offseason. 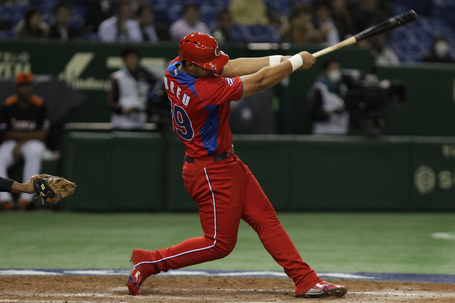 Would he be worth the money?

This one is harder to gauge. The smart money right now is that Abreu gets $10 million per season. It may creep up to $12 million, but for the sake of this article, let's say $10 million is the cutoff.

That's a heck of a lot of money, especially for a player that hasn't ever played in the majors. How on earth could he perform well enough to justify the contract?

Luckily, Wins Above Replacement shows us just how easy it is. A win on the free agent market is going for somewhere around $5.5 million (depending on the market). So, all Abreu would have to do is be a 2.0 fWAR hitter and he's earning his pay.

Well, 14 first basemen reached that plateau last season and another (Brandon Moss) fell just short despite hitting 30 home runs in 500 plate appearances. Another four designated hitters reached the benchmark. That's 19 out of 38 qualified hitters at those positions, or about half the league's qualified players at those spots.

To earn his money, then, Abreu would have to hit like an average first baseman might, even with his poor defense and baserunning. When Ryan Howard was 26, he totaled 3.2 fWAR, so it's a reasonable approximation. If, in fact, Abreu hits like Howard.

It is a risk, in other words. That's why all 30 teams aren't bidding him up, but his potential and the ability to pay off an investment at this level may be why so many teams are buzzing. Even though Abreu is old, he can be worth the money.

Can the Astros use him?

For all the hand-wringing about Jonathan Singleton or Chris Carter (or even Brett Wallace), signing Abreu will not be a bad thing. He will not block anyone's development. Do you know why?

The Astros have zero impact hitters on the roster. Maybe, MAYBE, you could make the case for Jason Castro as an impact hitter, but he fell a little short of that this season as a pure hitter. For his position, he's definitely upper echelon.

But, we're talking about impact bats in general and Houston doesn't have one. We believe that George Springer will be one, but signing Abreu won't block him. But, what about Singleton?

Well, it's simple. Signing Abreu gives the Astros some insurance in case Singleton fails to develop. He wouldn't be the first prospect to reach the top of the minors and flame out. Look at a guy like Delmon Young, who looked like he might be great at Double-A and then has been a big disappointment since.

If Abreu signs and does what he might, that'd give Houston a presence in the lineup. If Singleton hits well enough to earn a spot even with Abreu doing well, then the Astros just find room for him. Same goes for Japhet Amador and Preston Tucker. Signing Abreu would allow the Astros to wait until the prospects are done baking before bringing them up. Wouldn't it be nice to see a prospect force his way to the majors for once?