A Strange Roll Of The Dice

How I managed the Houston Colt .45s  and came out a loser

Share All sharing options for: A Strange Roll Of The Dice

I was born in Houston but moved to Wisconsin when I was 6 after my father got a job in Milwaukee making Blatz Beer. Well, to tell the truth, Dad didn't do anything that exciting. He didn't actually make the beer, he was just a lower-level bookkeeper, and maybe that's why they showed him the door when Blatz was taken over by Pabst in 1959. It surely wasn't a blue-ribbon day for Dad, and he never was quite the same after that. It was the start of hard times for our family.

Irrational as it might seem to blame our troubles on an entire city, I started to hate Milwaukee, but in a strange way, it was those hard times that put me in the stands and cheering for the visitors when the upstart Houston Colt .45s came to County Stadium in 1962 to face the Braves.

The season was over by Sept. 16 — for the Braves and the Colts — and that's probably the only reason I was able to get a ticket. I was excited because even though I'd grown up in Milwaukee, my hatred for the place had made it an easy decision to switch my baseball allegiance to the city of my birth. I was a die-hard Colt .45s fan from day one.

I had a Houston cap on my head when I got to my seat behind the visitors' dugout the next afternoon, and I was watching them take batting practice when it happened. A loud-mouthed Braves fan had been jawing at Colt .45s manager Harry Craft for the past half hour, and just as Craft was walking calmly to the dugout, the guy threw a full cup of beer at him, which missed its target, but hit the dugout steps just as Craft was stepping down. Harry slipped on the beer and hit his head pretty hard.

Players and coaches helped him to his feet, and from my seat I could tell that he was hurt pretty bad. His eyes were glassy when he looked into the stands and saw ... me. I guess it was my cap that got his attention because not many people were wearing them in those days. Finally Craft gathered himself enough to motion for me to come down. "Kid," he said, "get in here, we need you. The lineup card's already filled out, but I need you to manage. I have to go lie down."

I thought the blow to the head must have scrambled his brains, but what really shocked me was when first baseman Norm Larker opened the gate and ushered me into the dugout. In fact, not a single player or coach objected, and that's how I, at age 17, became the second manager the Houston franchise ever had, though you'll never find my name in the Baseball Encyclopedia.

Of course readers of The Crawfish Boxes are among the most astute fans in all of baseball, so you figured out a long time ago that old wgr56 — among the new posse of writers on this forum — was throwing you a big overhand curve. I apologize for the fraud, but there's a reason why I did it.

Oh, the Colt .45s really did play the Milwaukee Braves on Sept. 16, 1962, so there was that glimmer of truth to my tale, along with names like Harry Craft and Norm Larker. And a glimmer of truth is exactly how I think about Strat-o-Matic baseball, which is the real subject of this story. When playing Strat-o-Matic, it might be a big stretch of the imagination to think you're really managing in the big leagues, but the names are real and the performances mostly accurate enough to keep you interested and, for a time, suspend your disbelief. 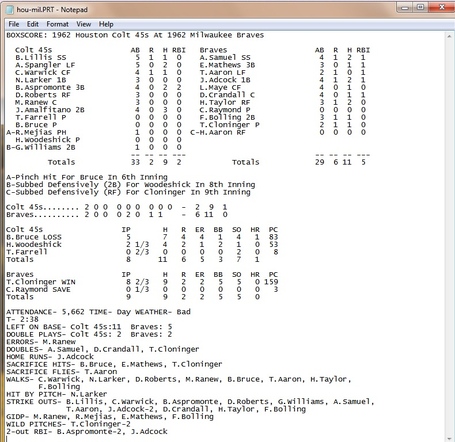 The box from the game I managed is testament to my eternal shame.

Most baseball fans have heard of the game, which has already gained a spot in Cooperstown, but it could be that some of you have never played it, and that would be a tragedy even deeper than the one I constructed for my fictional life as a Milwaukee teenager.

Strat-o-Matic baseball has been around since the company was formed in 1961, so it's just one year older than the Astros, and it enjoys a cult following. The game was originally played with cards and dice, and many people prefer that method today, even though the company now produces a computerized version, which is what I use.

This isn't an arcade game, it's all about strategy, and even though Harry Craft never fell down, hit his head or summoned me into the dugout to manage, in preparation for this story, I did in fact match wits with a computerized Birdie Tebbetts, using the same starting lineups that he and Craft used for Colts vs. Braves on Sept. 16, 1962.

Truth and fiction. The lineups were identical, but the outcomes ... not exactly! And that's what Strat-o-Matic has been delivering to its loyal fans for decades, and if you want to step into the history of the Houston franchise (or any other club) while enhancing your knowledge of the game we all love, Strat-o-Matic is a fun place to start.

The game gives Astros fans the opportunity to learn about the team through the years. Of course you can always peruse old statistics in a book or on your computer screen, but you may get an even better feel for players like Rusty Staub, Bob Aspromonte, Jimmy Wynn, César Cedeño, Fred "Freddy Flintstone" Gladding and Joe Sambito when you actually "manage" them, because the game does a pretty good job of recreating their careers based on actual statistics. 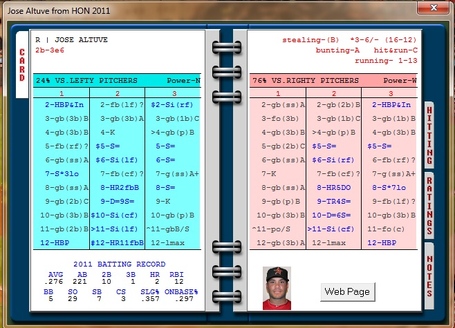 Want to know how reliever Frank LaCorte fared against lefties? Well, Strat-o-Matic was doing those types of lefty/righty splits before they became popular among today's more stat-savvy fans.

The game may be a little clunky and old-fashioned — certainly there are prettier games out there with slicker presentations — but for me, Strat (as it's affectionally called) will always be the king, because Strat-o-Matic has a way of magically transporting you to a beautiful world where the Astrodome is still shiny and new; where J.R. Richard never crumpled to the ground; and where, this time, we might defeat Pete Rose and the Phillies in the 1980 NL Championship Series.

With a few different rolls of the dice, maybe Dickie Thon never gets beaned by Mike Torrez in 1984; maybe this time we beat Keith Hernandez and the Mets in 1986; maybe Scott Podsednik's ball only reaches the warning track in Game 2 of the 2005 World Series; and, fresh in our minds, maybe we don't lose 100-games ... twice!

In fact, maybe your managing skill is all this team has ever needed to turn things around!

Sorry that I can't spend more time talking to you about the truth and fiction of Strat-o-Matic baseball, but right now, duty calls. As a manager, I've always prided myself on speaking candidly to my players when they need it, and I see a shamefaced Craig Biggio out in the hallway waiting to talk to me about how he ran through a stop sign last night and cost us a ballgame. "Hey Craig, get in here!" 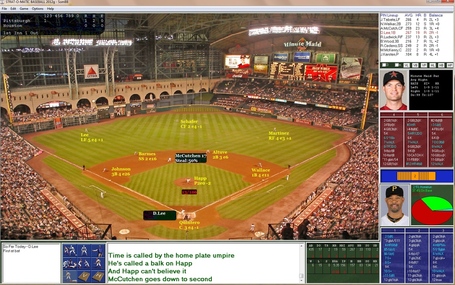 My game screen. J.A. Happ was in trouble early against the Bucs.