I Am Okay With the Astros' Rebuilding Plan

A big-picture fan of plans gives his stamp of approval to the Astros' rebuilding process.

Share All sharing options for: I Am Okay With the Astros' Rebuilding Plan

For somebody who is trained in the creation, execution, and completion of a long-term plan, one of the most difficult things to endure is dealing with visionaries. By visionaries, I do not refer to men like Thomas Edison, Kenesaw Mountain Landis, or Gottfried Wilhelm Leibniz. Rather, I speak of those people who enter a conversation and say things like this:

"I envision us being the number one provider of widgets in three years."

"I believe that your twenty-four month project can be completed in eight months."

The problem with visions is, without a plan of execution to get from the first inspired "huzzah!" to the ribbon cutting ceremony, they are not worth the air that gives them existence.

In a past job, I had the misfortune to work for dozens of visionaries. Everything had a "Charter for This" or an "Initiative for That". We had fancy posters and videos proclaiming the company's intentions to be great. But after a while, the message started to fall flat as we continued to lose market share, re-organized departments every six months, and instituted hiring freezes and pay increase limits...all in the face of a booming market.

My background is almost entirely in project management. I take pride in being a big-picture guy, something most of my engineer cohorts do not comprehend at all from the perspective of their detail-focused worlds. As I struggled to reconcile my training with the decisions I saw being made above me, it slowly dawned on me that those in charge had no collective understanding of how to turn a vision into a task-based plan that could be executed to reach the goals of their vision.

In short, we were a movie trailer without a full script for the movie. We were a fancy dust jacket without a narrative to fill the pages. We were the Kansas City Royals of the '90's and '00's.

Lately, I have read comments and articles from various sources including our own website expressing frustration with the Astros' front office. The complaints run along the lines of, "I'd rather watch a 70-win team than a 40-win team", "I am so angry that they are only spending $30 million on a major market club," and "What has GM Jeff Lunhow really done to earn the adoration of fans?"

Understandably, those sentiments come from fans wishing to see their team win, or at the very least, be interesting to watch. [side note: I think they are fascinating to watch right now, but that's another argument.] From my perspective, people want their cake, they want to eat it, and they also want to freeze the leftovers for another day in full expectation that it will be just as good. News flash: cake is never good after being thawed.

Just so, from the perspective of one project manager, it would be a mistake to throw money away to make this team marginally better. Brian Trostrel over at Astros County does a fun little exercise that I've seen in other places as well, playing pretend-GM for an article. I did the same earlier this off season. Brian asks an important question at the end of his article, in which he allocates about $75 million of the Astros' money to make them arguably a 79-win team. He asks, "Is it worth it?"

To some people, maybe. But those are not the people shelling out $75 million in the interest of attaining the baseball equivalent of instant gratification. To me, the answer is unequivocally no, and what follows is why:

My faith in this current Astros front office is bolstered by one thing alone, and it's not the lopsided trade to obtain Jed Lowrie or the hiring of well-respected laypersons to their front office instead of baseball lifers. What I like about this front office is that they have made it obvious that the Astros are executing a plan.

A well-executed long term plan is not a vision of, "We will draft well and trade well, and we will compete for the playoffs in 2015." A plan is a 25-page, step by step breakdown of tasks that are required to build a sustainable and profitable product that will be competitive indefinitely. A well-executed plan has provisions for making changes as needed, but it does not include options like, "If we have an opportunity to spend a ton of money to make ourselves marginally better in the short term, we'll do it because it makes us and all of our fans momentarily happy and forget the fact that we'll still finish fourth in the AL West, no matter what we do in the 2012 off season."

No, plans require commitment and execution by the entire project team. Everybody has to row in the same direction. Good plans say things like, "We will resist the temptation to spend an extra $50 million during the 2012 off season because we realize that saving that $50 million to help pay down debt instead of paying Lance Berkman, Michael Bourn, and Roy Oswalt to have a swan song will have greater impact on the long-term health of our product." And then, the project team follows through.

I likened a visionary to the KC Royals of the past couple decades because that unfortunate franchise cannot seem to grasp the concept of sticking to a plan. They have claimed to be rebuilding for...well, since I can remember. However, they still spent $55 million on Gil Meche, $36 million on Jose Guillen, $9.25 million on Kyle Farnsworth, and more recently traded the game's top prospect and others for a couple pitchers that do not add a whole lot to their win total. From the outside, it appears that the pressures of instant gratification continue to overcome their self discipline. As a fan of a terrible team who understands long-term thinking, it's gut-wrenching to read about.

The most certain path to long-term financial comfort is not day trading on the stock market. It is long-term investments in bonds and gold and the like. If the Astros had signed a high-dollar free agent or two, it would be like investing in a stock at its highest point. There is no reward beyond the immediate gratification. True success comes from patience and discipline. Those virtues are what the Astros are showing me right now, and that is why, if I were able to invest in the future of a baseball club in terms of Wins and Losses over the next twenty years, I would invest in the Astros.

I do not know the exact details of the Astros' plan, but it is obvious that there is a plan. Knowing that makes me feel very comfortable for their future performance.

As I wrote this post, my wife and I opened a package from her uncle, an avid Braves fan who has dominated my Fantasy Baseball league for two seasons now. Inside, we found an autographed copy of Darrel Chaney's new book, "Welcome to the Big Leagues: Every Man's Journey to Significance," containing two autographed baseball cards and a personal message.

Chaney was a utility infielder for the 1975 Big Red Machine and a long-time Brave, and attends Bible Study with my wife's uncle. The uncle, one of the most passionate baseball fans I know, was kind enough to arrange this unexpected gift for us. I am looking forward to reading this, and am incredibly grateful that they thought of us.

I recommend this book to anybody because my wife's uncle is an inspirational guy, and since he thinks highly of Chaney, it's very likely this book will be inspiring as well. 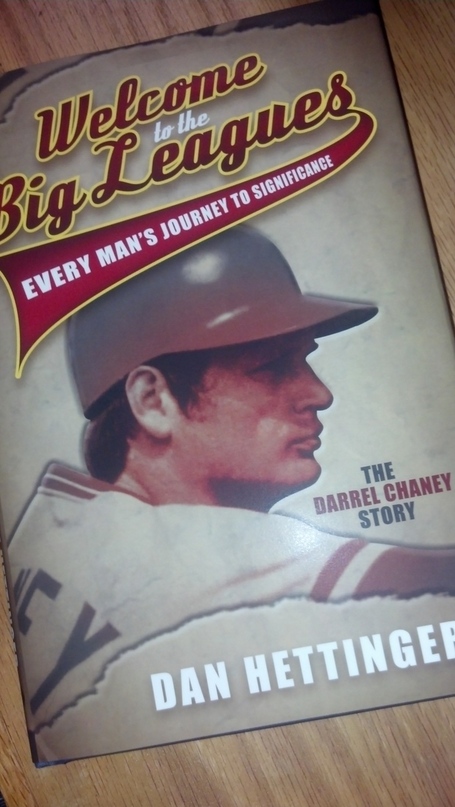 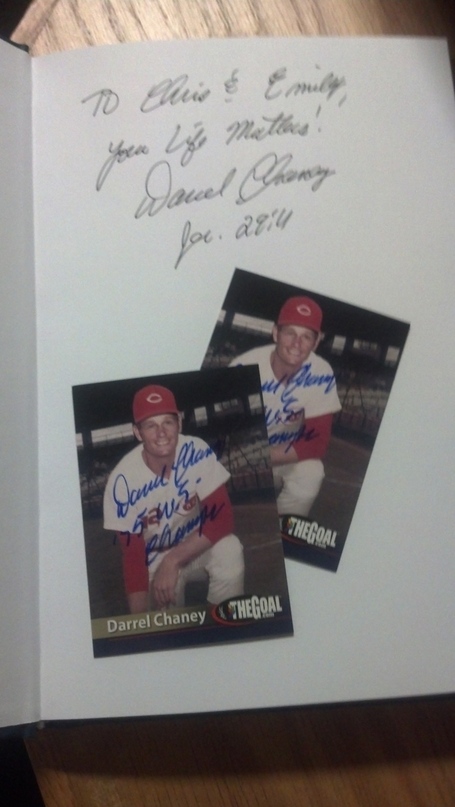