A Chance Meeting with Tom Griffin

The last thing I expected to see in a dusty antiques store in Redlands, California, was former Astros pitcher Tom Griffin. Yet there he was, staring me down from across the aisle.

Share All sharing options for: A Chance Meeting with Tom Griffin

The store will be closing in fifteen minutes. Please take your purchases to the register.

"No, no, no, not yet," I thought. I was only on the second level of the three-level antiques store, and I'd just found a promising stack of vintage postcards. I have a fascination with vintage postcards. It wouldn't be quite accurate to say that I collect them. Collecting suggests a methodology of some sort. A grander plan. Me? I just like them and I have a lot of them.

My girlfriend and I had decided to take a weekend trip to get out of The City. Nothing extravagant; we'd headed about an hour east to Redlands, California. The antiques store hadn't even been on the itinerary, but she insisted and heck, we had a little bit of time to fill, so I figured why not.

As the closing announcement floated through the public-address system, I was making my way steadily up through the cavernous store. I had no idea the store was about to close.

As I reached the stairs, I saw my girlfriend at the bottom, waiting for me. "I found some postcards," she said.

"What the heck," I figured. Maybe I'd find something good. I still had fifteen -- The store will be closing in ten minutes. Please make your way to the register with your purchases. Thank you.

The voice had the tone of a middle-aged woman who'd had enough of this day, thank you very much. As if she was daring me to test her patience. See if I'll wait one extra minute, her voice said. See if I won't lock you in this store overnight.

I figured I'd just give the postcards the once-over. See if there was anything particularly good there. Something from the 1930s, maybe, when postal rates mattered and people would write entire letters on the backs of postcard in the tiniest handwriting imaginable. Or some gaudy picture of the inside of a tacky motel room, no better than a picture some tourist had taken. Those are quite possibly my favorite postcards. The ones that screamed out, "There was a sale at the printer's so we had to improvise."

The weary-voiced cashier eyed me as I hurried to my girlfriend's side... but I never quite made it, because I was caught off-guard by the visage of Tom Griffin, staring me down from across the aisle.

It wasn't Griffin himself in that antiques store. I wouldn't have recognized him if it had been. What it was was a picture of a fresh-faced young man in an Astros cap, toeing the mound at the Astrodome, peering in at a batter who was probably about to eat his lunch.

Griffin was one of the very first Houston Astros draft picks. Until the mid-eighties, Major League Baseball held more than one draft a season, including a January draft for high school and college players who'd graduated in the winter. Just imagine that for the Internet age - something to talk about in January!

In the very first January draft in 1966, the Astros selected a high school pitcher from Grant High School in Van Nuys, California, in the first round - 6'3", 210 pound Tom Griffin.

But it would all be downhill from there. On August 3, 1976, the San Diego Padres selected him off waivers from the Astros. He'd go on to pitch for the Padres, Angels, Giants, and Pirates. Despite throwing fewer than 250 innings between 1980 and 1981, he led the NL both seasons in hit batsmen.

He retired, quietly, after being released from the Pirates in May 1982, following 1-3 record through 6 appearances (4 starts) with an ERA nearing 9.

Except for his brief time in Pittsburgh, Griffin played his entire career west of the Mississippi. He was a largely-unspectacular pitcher who left the Houston Astros before I was born, so it's not surprising that I'd never heard of him. But I feel for Tom Griffin. That rookie season held such promise, and he could never quite reach that level of success again. Baseball Reference lists his nearest comparable as Don Larsen. That seems appropriate - a couple of career-defining moments scattered amidst an otherwise-inglorious career.

I flipped past the first picture of Griffin and found a treasure trove of old Astros team pictures. These seem to be from programs, with ads and rosters on the back. There is tape around the sides of the pictures, which leads me to believe that this is from a scrapbook. Somewhere in Redlands, California, there is a Tom Griffin fan. Or maybe Griffin himself, who knows? 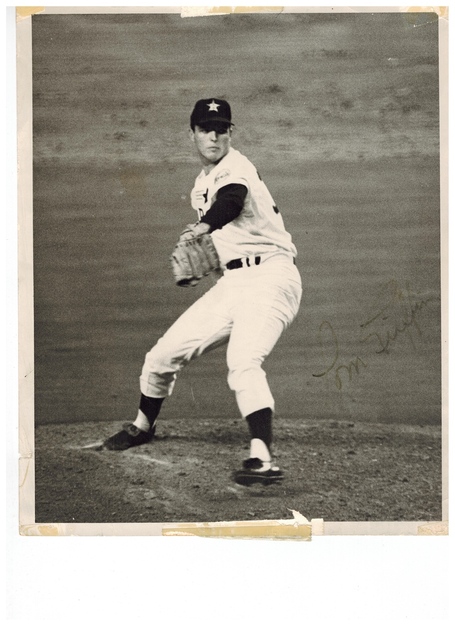 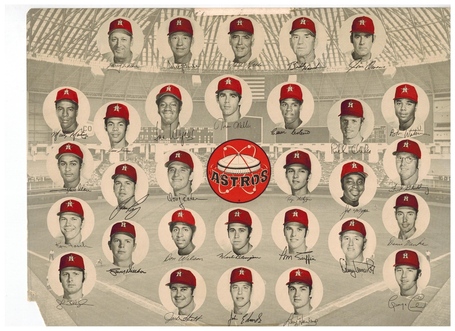 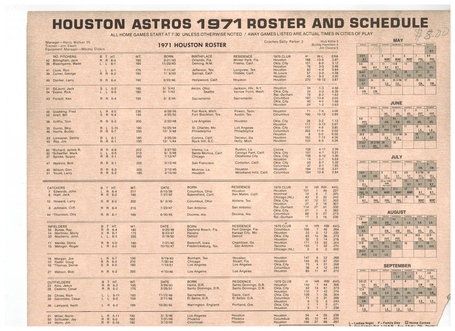 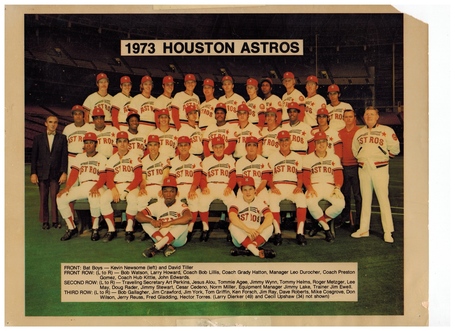 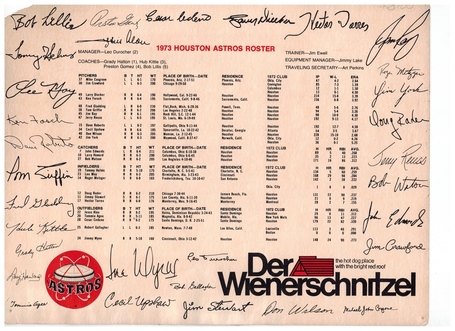 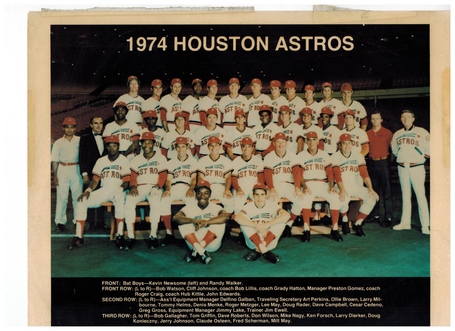 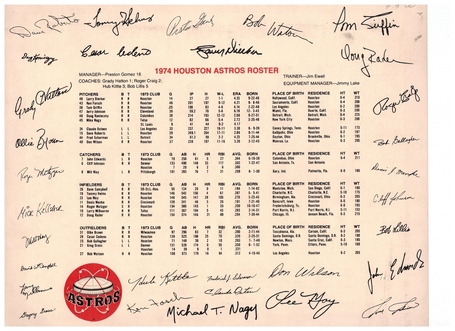 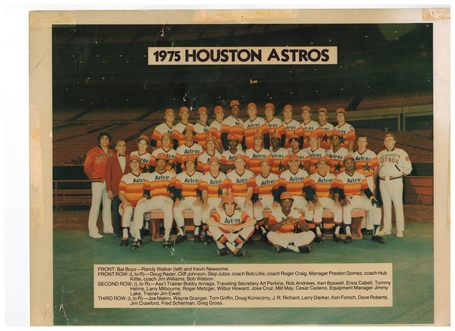 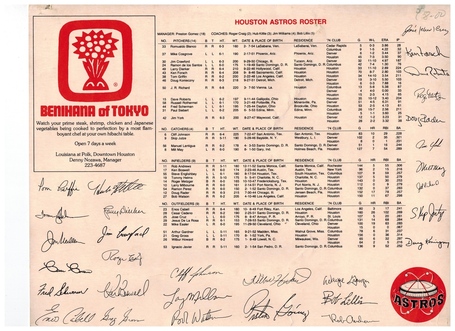 (As an aside, what in the world is going on in this picture between Doug Rader and Cliff Johnson?) 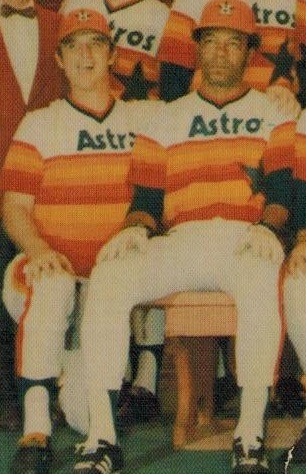 The most poignant picture might have been this simple family shot, featuring the 1969 NL strikeout champ (sort of) and his wife and daughter. He looks so young (he was, actually, just 21 years old) and hopeful. 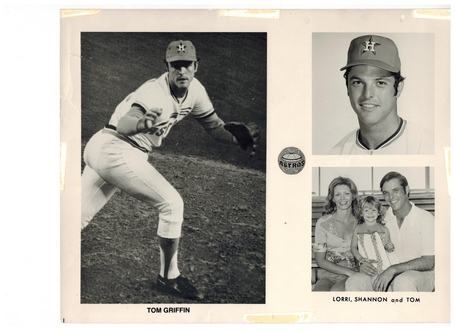 Now, to be fair, Tom Griffin was really good at throwing a baseball. He threw almost 1,500 innings as a major league pitcher and was worth 6.9 wins over 14 seasons. He won 77 games. He struck out more than a thousand major league batters. He ranks 191st in his career K/9 rate, with 6.347.

Tom Griffin played most of his career in pitcher's parks, and it probably masked a lot of his shortcomings. However, he did ten home runs in fewer than 500 plate appearances. Maybe he should've made a Rick Ankiel/Brian Bogusevic transition. Then again, he was in the top 5 in the NL in errors as a pitcher, so maybe not.

There was a lot of good and a lot of bad with Tom Griffin, to be sure. But this weekend, in Redlands, California, with a weary-boned cashier eyeing me and giving a running countdown of the store's closing hours, all I saw was an unexpected Astros logo on an unexpected picture in an unexpected antiques store.

Even the cashier's bone-chilling glower as she rang me up at the register couldn't diminish the warmth I felt over finding a little piece of Astros history in a pretty unlikely place.