Today's Fantasy Report is dedicated to those Crawfish Boxes readers who participate in one of the three official TCB Fantasy Leagues. There is no Astros-centric content today - and besides, I have run out of metaphors to describe how completely useless Astros' players were to Fantasy managers this season.

It's finally playoff time! Below, I'll cover the playoff teams for all three leagues, plus do a comparison to show how the rankings would have stacked up in an alternate reality where the leagues were Rotisserie instead of Head-to-Head. So, without further ado...(or really any ado at all, actually)...

About midway through the season, HMC Wrecking Crew supplanted me atop the rankings, but my auto-drafted team rallied back on the wings of the league's best lineup and by week 20, I had regained the lead. Fun note: Cocamos had one Save all season. One!

In the table below, "Rank" is the final Yahoo Ranking, with the top 8 teams qualifying for the playoffs. "Roto" is what the rank would have been with standard Roto scoring. Roto Points is the number of points a team gathered (where finishing 1st in a stat category = 16 points, 16th = 1 point, etc, then with all stat categories added together). Luck is the Yahoo Rank subtracted from the Roto rank. High luck scores mean that a team was lucky this season in his/her match-ups compared to the actual performance of his/her team.

Ahem. I dominated this league. Just sayin'. Luckiest mug in the league goes to Padron Aficionados, who qualified for the playoffs with a ranking of 5 but in actuality played like the 3rd-worst team in the league. I've never seen quite that high a difference before. Lucky dog!

Joe Morgan's a Fool finished in first place for the regular season in this league, and he's pretty much dominated the position since he took over from me in about Week 5. In fact, he finished 12.5 games ahead of the field, which is impressive. He did this almost purely with hitting, as his pitching was about average for this league.

Luckiest winners include Killer Bee Boppers, who finished seven spots ahead of his Roto ranking and ... well, me. I had no business being in the playoffs. Interestingly, four teams finished outside of the playoffs who would have qualified with Roto scoring: Kevin Bass, Lexington Legends, Houston Buffs..?, and jello. That just goes to show how important it is to manage your lineups to take advantage of your opponents' weaknesses in Head-to-Head formats.

Of all three leagues, this one had a solid competition for first place all throughout the regular season. Oklahoma City 89ers finished on top, only three games ahead of Astros don't suck. Ads sat in first place for almost the entire season but lost 4-6 to cavemen in the final week, while OC89 beat me 9-3. (Apologies to Ads...I was streaming pitchers like crazy in an attempt to make the 8th playoff spot. It didn't work, but if you want to see how desperate I was, here you go.) 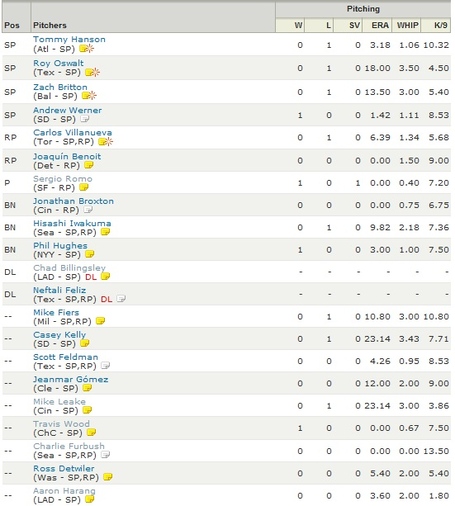 Fifteen starting pitchers and only three wins from them. Yeeeeeeeesh! The moral of the story here, kids, is that people who stream pitchers are big, dumb jerks, it costs other people their #1 playoff seed sometimes, and it rarely works anyway. So don't do it.

On to the rankings:

As you can see, only Bayou Dogs was truly unlucky by finishing outside of the playoffs despite a strong statistical season.

Well, this should be my last fantasy post until the playoffs are over (Unless you really are dying to know if any of the current Astros can contribute to your Fantasy team. I'll save you the trouble of searching for that information...they can't. Just don't go there.). Thanks for a fun season.