With the caveat that our dear readers keep in mind my eternal optimism (balanced with a dash of stark realism), I humbly offer my take on a fan favorite here in Lexington, that player being RHP Luis Ordosgoitti.

Overview: Always glad to shake some hands and meet some fans, Ordo is a personable presence in the rotation here in Lexington. As a 19 year-old righty in the Sally League he's playing against older and more experienced competition, and while his numbers may reflect this you'd never know it from talking with him. Optimism is the call-word for this 3rd year pro.

Strengths: Luis throws a standard set of pitches (2-seamer, 4-seamer, curve and circle change), and stays around the plate frequently. He has a 3/4 to high-3/4 arm slot with easy action and takes a long yet effortless stride toward the plate. He has a projectable frame, which could lead to another tick or two on the fastball. When he comes around in his windup, he almost gives you the impression that he's a sidearmer. His 4-seam FB comes in around 90-92, 2-seamer around 86-88, curve in the mid-70's and change around 80-82. He's not one to back off a challenging hitter, but he's learning how to minimize the hitters' chances as much as he can. Ordo will come right at you, but he's definitely not a strikeout artist. His game, when it's on, produces lots of grounders (42.8%, thus far this year, with an average of 8 per game), and so he relies on a strong infield to have his back. He gets decent run and sink on the 2-seamer, and there's plenty of separation between his 4-seamer and his change. There is little, if any, discernible difference in his arm speed when he throws a breaking ball or off-speed pitch. He has a decent move to first, as well. He's helped to keep the running game down (40% caught stealing when he's on the mound). 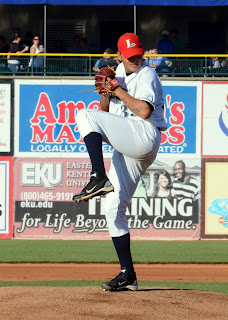 Weaknesses: Part of the problem of pitching to contact is that sometimes you get hit, and hit hard. Ordosgoitti has given up 32 doubles in 16 games, this year, along with 9 homers, and opposing batters have an .840 OPS against him. While he gets lots of grounders, his groundout/airout ratio sits at a disappointing 1.32. A big part of that is there are a lot of well-hit grounders to deal with, many of which are often unreachable. He keeps his walks down (23 in 89 2/3 IP) and strikes out his share of hitters (7.0/9IP), but he's not going to overpower a lot of guys. That's not his game. At this point in his development he's learning to maximize his assets, i.e. keep the ball down, throw the 2-seamer down and in to righties, change-up to lefties, etc., and he still has a long way to go with that. Again, he's only 19. His curve gets a little slurvy at times and he gets his change-up a little high in the zone more often than I'd hope to see.

He has a tendency to give the hitter a good, long look at the ball before he delivers, which can't be helping him any. I'd like to see him push off the mound a bit more as opposed to drifting toward the plate, although with the injury issues he's had this year it may do more harm than good.

Outlook: With the ability he's shown thus far, I'd expect his ceiling to be somewhere around 4th or 5th starter/middle reliever, but much depends on his ability as far as damage control are concerned. With a strong quartet of gloves behind him in the infield he can be reasonably comfortable playing his game, but a few things will need to happen before he can move on to the wind tunnel that is Lancaster. With a little more time in the weight room he could be hitting 94 with regularity, and that could change things dramatically for a groundball pitcher. I'd like to see what he could do coming out of the pen in short appearances, but as it stands now he will likely repeat at Class A Lexington next year, with a chance at a late-season promotion. What helps him is that he's got the right attitude and seems to be very coachable, from what I've witnessed. With the extra time here in Lexington, along with a little more muscle mass from his time in the gym, Luis could be seen as a bit of a sleeper-type in the next year or two.